Breeders' Cup Next Step For Loughnane 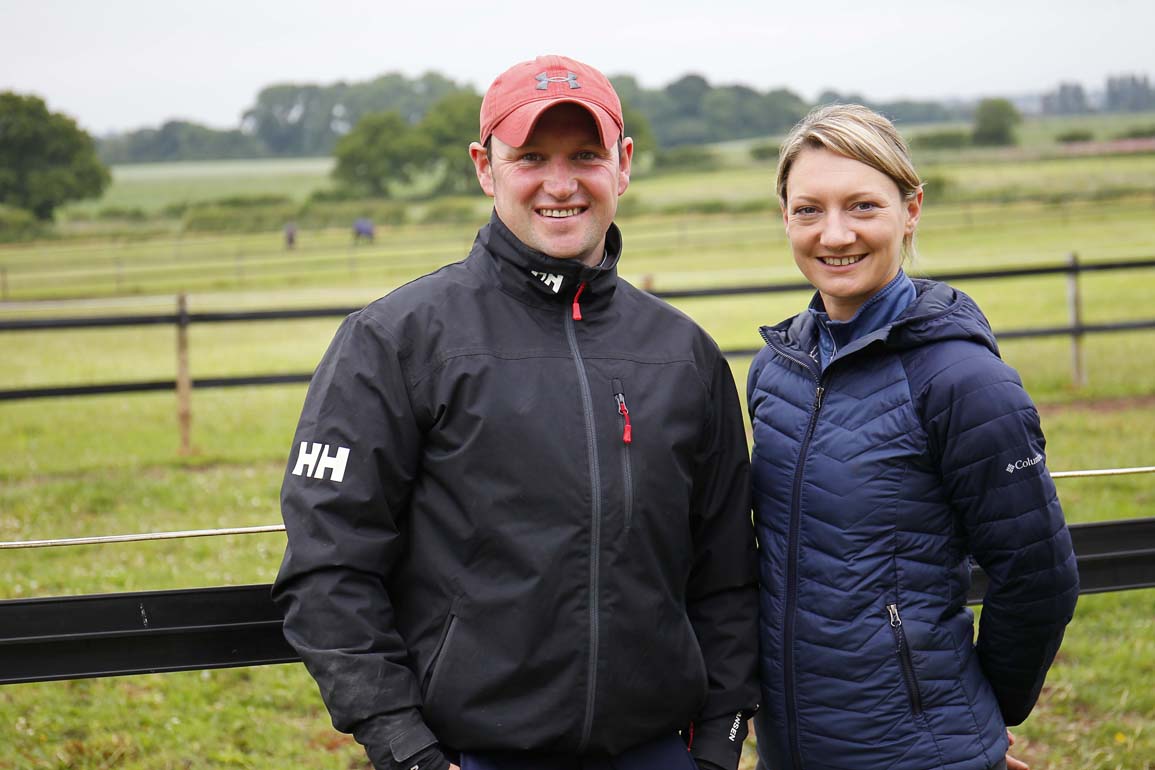 Del Mar, CA–Friday's Breeders' Cup card has been branded as 'Future Stars Friday', and that tag rings true for not only the juveniles vying for divisional championships, but also for a handful of ascendent British-based trainers who have their first runners at the meeting. James Ferguson, who recently joined the Group 1 ranks, sends out Mise En Scene (GB) (Siyouni {Fr}) in the GI Juvenile Fillies Turf, while fellow Newmarket conditioner George Boughey saddles Cachet (Ire) (Aclaim {Ire}) in the same race and Thunder Love (GB) (Profitable {Ire}) in the GII Juvenile Turf Sprint. The Galway-born, Shropshire-based Dave Loughnane likewise has live chances in both the Juvenile Fillies Turf and Juvenile Turf Sprint in Amo Racing's Hello You (Fr) (Siyouni {Fr}) and Go Bears Go (Ire) (Kodi Bear {Ire}).

Loughnane and his wife Sarah, who is also a pivotal member of the team based at Helshaw Grange, arrived in Del Mar on Sunday night, just in time to meet their stable stars as they exited quarantine on Monday morning, having themselves flown on Friday.

“Thankfully they both traveled over well and have taken it all in their stride,” said the 34-year-old Loughnane. “They got out onto the track for the first time [Monday] morning and they were both very enthusiastic and happy to get out and stretch their legs. We couldn't be happier with them. They both moved great and took it all in. For two 2-year-olds going away from home and for a trip of this extent for the first time, they've taken it all really, really well.”

Hello You broke her maiden by 6 1/2 lengths at first asking at Wolverhampton in May prior to placing in the G3 Albany S. and G2 Duchess of Cambridge S. for trainer Ralph Beckett. In her first two runs for Loughnane, Hello You had to fight traffic in the closing stages to finish sixth in the G2 Lowther S. and fourth behind Mise En Scene in the G3 Prestige S., but she put it all together last out to beat Cachet and the admirably consistent Oscula (Ire) (Galileo Gold {GB}) in the G2 Rockfel S. going seven furlongs at Newmarket on Sept. 24.

Loughnane wasn't hiding his admiration for the bay filly, who is a close relative of Group 1-winning sprinter Signs Of Blessing (Ire) (Invincible Spirit {Ire}). “I absolutely love her,” he said. “She's all quality. She has the physique to match her pedigree and whatever she does this year is going to be a bonus. She's going to be a gorgeous 3-year-old. Since she's joined us she's progressed and grown up mentally and physically. She was exceptional in the Rockfel; she was under a second slower than US Navy Flag over the seven furlongs at Newmarket [in the Dewhurst], and he holds the track record. It was a great performance and I think if she can repeat something like that on Friday I think she could run a huge race. So fingers crossed we get a nice draw and we'll see where we are from there. I think a mile for her will be no problem. I've made it pretty clear I think she's a Guineas prospect for next year. I think the quick mile around here should be absolutely fine for her. She was doing her best work over a stiff seven last time out in Newmarket.”

Go Bears Go, meanwhile, was the first Amo Racing runner to arrive at Loughnane's yard and he has been mixing it with the best of his generation all season. A debut winner at Ascot in May, he missed by just a head to the subsequent dual Group 1 winner Perfect Power (GB) (Ardad {GB}) when second in the G2 Norfolk S. at Royal Ascot. Bouncing back five weeks later, Go Bears Go was a game winner of the G2 Railway S. at The Curragh. He was beaten just three-quarters of a length when third in the G1 Phoenix S. and a length when fourth in the G1 Middle Park S., but faltered late on in the G1 Dewhurst S. when trying seven furlongs for the first time.

“He's had a long year and he's danced every dance and hasn't let us down yet,” Loughnane said. “The Dewhurst in hindsight probably wasn't the right option for him at the time but we live and we learn from these things. We're taking a drop back in trip to five furlongs on a sharp track, but he hits the lids, he travels strongly and we'll hope he gets a nice draw and see what he can do. This will be his last run for the year and he'll go for a holiday after this. You don't get a chance to run for a pot like this very often and the team at home, Kia [Joorabchian] and Amo Racing were very keen to take a crack.”

Despite his falter in the Dewhurst, Loughnane said he thinks Go Bears Go will be a six to seven furlong horse next year.

“I think something like the [G1] Commonwealth Cup would be a very likely target on our minds,” he said. “But very much our target for now is Friday and the Juvenile Turf Sprint. I'd love for him to be drawn in the first five or six. They're going to be going hard but he's very, very quick out of the gates; he's like a bullet from a gun. We've put a set of blinkers on him to sharpen him up a small bit and I'm confident he'll hit the lids and wherever he lands we'll let him get into a rhythm from there. It'll be a fast-run five and we know he stays six so he'll be doing his best work in the final furlong.”

Hello You and Go Bears Go are the two best runners to date for Loughnane, who took out his license six years ago. Originally from Galway and with no family history in the business, Loughnane forged his own path, working in a local yard from the age of 13. He then ventured to Australia, where he spent five years between the stables of Bart and Anthony Cummings and Paul Messara, also mixing in some stud farm and pre-training experience along the way. Loughnane moved to the UK in 2013 and spent further time learning the trade under Daniel Mark Loughnane, John Quinn, Tom Dascombe, Sir Mark Prescott, Stuart Williams and David Elsworth. Loughnane took out his license in 2016 and set up in North Yorkshire, but moved into his current yard in Shropshire 2017, with just he and Sarah looking after seven horses. They now have 70 on the books, with 50 in the yard at any given time, and recorded a career-best year in 2020 with 41 wins in Britain, including a first stakes win with Santosha (Ire) (Coulsty {Ire}) in the G3 Princess Margaret S. In addition to their first wins at Group 2 level, 2021 also brought a Royal Ascot winner in Lola Showgirl (Ire) (Night Of Thunder {Ire}), who won the Kensington Palace S.

“We always felt we were good enough to be competing at the top level but we probably didn't expect to be here this quickly,” Loughnane said. “It's a dream come true to not just be here but to be here with two live chances. It's why we get up in the mornings.”

Though Shropshire is also home to trainer Tom Dascombe, it would be better known for it's National Hunt yards. Loughnane has proven, however, that a horse doesn't need to be stabled in a major training centre to win races.

“You can train winners anywhere, if you've got the facilities and know how they work,” he said. “We're in a very good location, we're in the centre of England and we have 27 tracks within 2 1/2 hours. Traveling around can get quite expensive for owners, so we're in a good location to be able to minimize those costs.”

Of his numbers, Loughnane said, “it's grown pretty rapidly, but that's as big as we'll get. We have no ambition to get any bigger. For us it's about 70 horses of the highest quality and it's just about trying to improve the quality each year.”

Loughnane said his ability to win with horses at all levels has resonated with owners.

“It's easy to train a good horse, they train themselves,” he said. “But you have to be able to win with lower-grade horses and we feel that's probably where we've made our mark, is winning with the lower-grade horses that maybe other people couldn't win with, or thought they couldn't win with, and getting the best out of them. That's our whole ethos, is to get the best out of every horse in our care. The horse comes first for us, and happy horses win races.

“Thankfully we have some very loyal and good owners who are willing to support us and allow us to buy horses for them. We always look for an angle in a horse to improve. Something that works for us may not have worked for someone else, so it's about finding that angle to improve the horse and get the best out of them.”

Loughnane's results last season caught the eye of another ascendant player in the game, Joorabchian of Amo Racing.

“He's brilliant for the game,” Loughnane said. “We constantly need new owners coming into our industry and sport and Kia is very much this new era of owner. He's put a lot of money into the industry and the sport and we're very lucky that he's entrusted us with some of his horses.”

“We had a very good year last year and were training a lot of winners during the winter,” Loughnane added. “Rossa Ryan, [Amo Racing's] stable jockey, was riding a lot for us and I suppose that helped make our name stand out a little more. Kia got in touch with me towards the back end of last season and said they'd be willing to send us a couple horses, and Go Bears Go was the first horse that came to us. They've been brilliant to send us some high quality animals, and that's the sort of horse we need to be able to showcase our talents at the top level.”