Home » Archive » Shared News » Breeders' Cup Friday: Maybe They Should Have Had a Prep?

Breeders' Cup Friday: Maybe They Should Have Had a Prep? 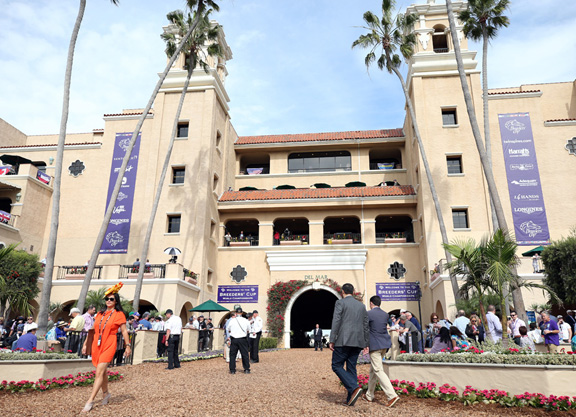 They were testing the waters, taking the new way of training horses–giving them as much time as possible between races–to a new extreme at this Breeders' Cup. Not just one or two, but several trainers were going to have their horses spend the months leading up to the 2017 Breeders' Cup resting in their stalls. Whether or not the “can't give them enough time off between races” guys would turn out to be successful promised to be one of the big stories of this Breeders' Cup. And should they be successful, there's little doubt it would have influenced trainers in Breeders' Cups to come to do the same.

The two most prominent horses in the card who had not raced since what seemed like the Truman administration were Mor Spirit (Eskendereya) in the GI Breeders' Cup Dirt Mile and Stellar Wind (Curlin) in the GI Breeders' Cup Distaff. At 2-1, Mor Spirit was eighth. He last raced June 10 in the GI Metropolitan Mile. A winner of three straight Grade I races, Stellar Wind was last of eighth at odds of 3-1 in the Distaff. A horse that had not raced since the July 30 GI Clement Hirsch, she probably lost the older filly and mare Eclipse Award to Distaff winner Forever Unbridled (Unbridled's Song). She hadn't exactly been busy of late, but she at least raced Aug. 26 in the GI Personal Ensign H. at Saratoga.

As far as Friday's winners went…

The sample size is small and a lot more members of the moth ball brigade will be in action today. Things might change. But for two very good horses who spent prep season in hibernation, the results were not positive yesterday.

Forever Unbridled's win had to be a gratifying one for trainer Dallas Stewart. He's best known for being the guy who seems to always just miss in the biggest races with huge longshots. But he is more than capable of finding his way to the winner's circle on the biggest days. This was his second Breeders' Cup win, both of them coming in the Distaff. He won the 2001 Distaff with Unbridled Elaine (Unbridled's Song). Stewart also won the 2006 GI Kentucky Oaks with Lemons Forever (Lemon Drop Kid), the dam of Forever Unbridled.

It was a big win for Stewart, owner-breeder Charles Fipke and jockey John Velazquez. But perhaps no one enjoyed the win more than Joel Rosario. He had ridden the 5-year-old mare in each of her last two starts, both of them wins. Yet, the Forever Unbridled connections decided to take him and replace him with Velazquez. Because the decision came in late, the Del Mar stewards declared the Fipke had to pay a double jocks fee, to both Rosario and Velazquez. While Velazquez did all the hard work, Rosario sat in the jock's room, did nothing and earned $110,000 for watching a horse race. Good work if you can get it.

With apologies to Stewart and other Breeders' Cup winners Chad Brown and Aidan O'Brien, the training star of the day was Jerry Hollendorfer. Battle of Midway was owned by Rick Porter earlier in his career, but Porter decided to sell the 3-year-old. Obviously not wanting to lose him from his barn, Hollendorfer helped broker a sale to WinStar Farm and Don Alberto Stable. After the sale, Battle of Midway managed to win only two relatively small races, the GIII Affirmed S. and the Shared Belief Mile. In his start prior to the Dirt Mile, he could not beat his rivals in the GIII Oklahoma Derby. But for the Breeders' Cup, Hollendorfer had him as sharp as broken glass. Though Mor Spirit threw in a clunker, a very fast horse in Sharp Azteca (Freud) did not. Somehow, Hollendorfer had him in such good form he ran down the older, more accomplished horse.

Of course, what would a day of major turf racing be without wins from grass winning machines Chad Brown (Juvenile Fillies Turf) and Aidan O'Brien (Juvenile Turf)?

Tomorrow's another day and what a day it promises to be. There are stars in every race and the GI Breeders' Cup Classic is without a doubt the race of the year and should decide Horse of the Year. Just keep an eye on those horses whose trainers thought it was a good idea to not try to earn any money for their owners for months on end or do anything with their horses more strenuous than morning workouts. If they stub their toes all day long perhaps trainers will come to realize what should be obvious. These are race horses and it's ok to actually race them.