Home » Archive » Shared News » Breeders' Cup Chairman: 'As of Now, BC Will Be Run at Santa Anita'

Breeders' Cup Chairman: 'As of Now, BC Will Be Run at Santa Anita' 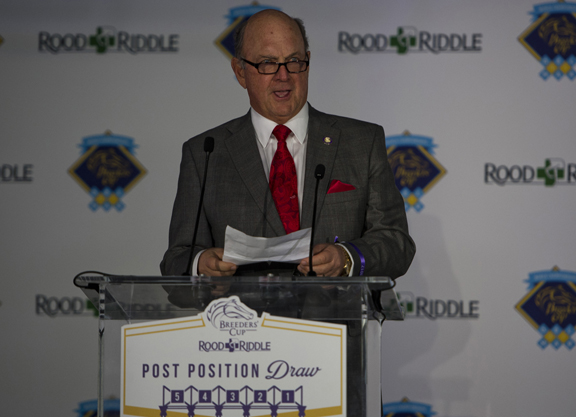 The rash of equine fatalities at the current Santa Anita meet has led some to speculate over whether or not a change of location for the Breeders' Cup could be an inevitable consequence. However, Breeders' Cup Chairman Fred Hertrich told the TDN that no decisions have been reached yet and, as such, Santa Anita is still officially being recognized as the host of the two days of championship racing, scheduled for Nov. 1-2.

Through Sunday, a total of 29 horses have died at Santa Anita since the meet began Dec. 26. After Formal Dude (First Dude) broke down Saturday, the California Horse Racing Board requested that Santa Anita suspend the final seven days of racing which were remaining at the meet at that point. Santa Anita management denied the request.

Though it could happen at any racetrack, everyone agrees that a horse breaking down during a Breeders' Cup run at Santa Anita would create a catastrophic public relations nightmare for a sport that has never before come under such intense fire from animal rights activists, the media and others who are questioning why so many horses die while racing and training each year, not just at Santa Anita but in horse racing in general.

But Hertrich was firm in saying that no decisions had been made as yet and that none can be made until the Breeders' Cup takes all the necessary steps to resolve what is a very difficult and controversial situation.

“We are evaluating the situation,” Hertrich said. “As of right now the Breeders' Cup is going to be run at Santa Anita. There's no change.”

The issue will certainly come up when the Breeders' Cup holds a board meeting June 27 in Lexington. The meeting was scheduled a year earlier, and was not scheduled to deal specifically with the question, said Hertrich.

“We don't make knee-jerk decisions,” Hertrich said. “Of course, this is a major issue that the industry in total is looking at. Like anything else, it will be discussed. It's not that cut and dried because we are in uncharted waters because, normally, major events just don't change venues. In other words, the only way we would ever make a change is for the board to make a decision with the management team. We have a meeting in two weeks. I'm sure it will be a topic of conversation but as of right this minute, without having had a board meeting, with management, it is business as usual.”

If a resolution were put before the Board to remove Santa Anita as the host of this year's Breeders' Cup, it would be voted on by a 14-member board and the decision would be based on a majority vote.

Should the Breeders' Cup Board decide to move the event, the next question would be to where? It has been reported that the only track under consideration as the new location is Churchill Downs. When asked if that were the case, Breeders' Cup Board member and President and CEO Craig Fravel declined to comment.

Though time is running short, the Board does not have to make a decision at the June 27 meeting as Breeders' Cup bylaws call for the Board to assemble at any time to deal with emergency situations.