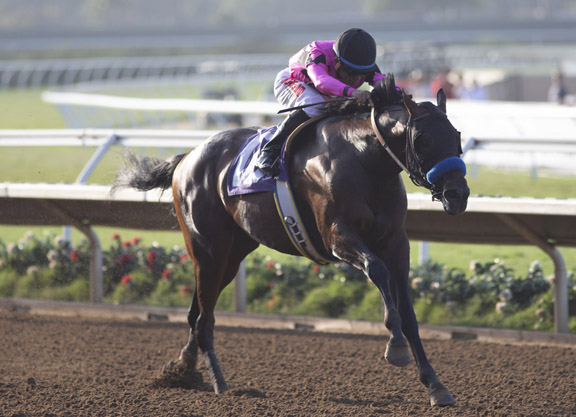 Gunnevera (Dialed In), winner of last season’s GII Fountain of Youth S., breezed six furlongs Friday morning at Gulfstream Park West in advance of an anticipated start in the Nov. 3 GI Breeders’ Cup Classic at Churchill Downs. “It was a nice work,” confirmed trainer Antonio Sano. “We gave him a nice easy work.” Gunnevera, who currently ranks second on the list of alternates for the Classic, appears likely to make it into the Classic lineup as Bravazo (Awesome Again) and City of Light are expected to be entered in the GI Dirt Mile. “It was a surprise to me. Never in my life did I think he wouldn’t be selected [into the main field],” Sano said. Gunnevera, who was scheduled to leave for Churchill Downs by van Friday night, will be accompanied by Irad Ortiz Jr. for the first time in the Classic.

G1 Godolphin’s Dubai World Cup winner Thunder Snow (Ire) (Helmet {Aus}) completed his final step prior to the Classic with a seven-furlong move in 1:27 at Churchill Downs Friday. A close-up second in the Sept. 29 GI Jockey Club Gold Cup carved out opening splits of :13.20, 26, :38.40, :50.40, 1:02.40 and 1:14.60. The 4-year-old completed the move with a one-mile gallop out in 1:41.20. According to Godolphin’s traveling manager Tommy Burns, trainer Saeed bin Suroor is expected to arrive at Churchill Downs early next week.

David Fawkes-trained Louder Than Bombs (Violence), who captured the Armed Forces S. over the Gulfstream turf course last time out, breezed a half-mile in :47.02 at Gulfstream Friday morning. The 2-year-old, who posted the fastest of 31 recorded at the distance Friday, is the second alternate for the Nov. 2 GI Juvenile Turf.

Breeders’ Cup Classic contender Mind Your Biscuits (Posse) completed his final Classic work early Friday morning at Churchill Downs. Winner of the Sept. 29 GIII Lukas Classic, the chestnut negotiated five furlongs in an easy 1:03.20, the 35th fastest of 36 at the distance. “It was a two-minute lick,” Summers said. “We’re really happy with how he’s doing and how he went this morning.” The multiple Grade I winner has been pre-entered in both the Classic and GI TwinSpires Sprint. “I actually originally pre-entered in the Classic and Dirt Mile,” admitted Summers. “However, once I heard X Y Jet [MGSW by Kantharos] was coming for the Sprint, I changed my pre-entry at 11:50 a.m. on Monday [deadline was noon].”

Seeking the Soul (Perfect Soul), currently 17th on the preference list for the Classic that is limited to 14 starters, worked a half-mile in :47.60 Friday morning at Churchill Downs. The GI Clark H. winner carved out splits of :11.60 and :23.20, before galloping out five furlongs in 1:00.60, according to Churchill Downs clocker John Nichols. The work was ranked the third fastest out of 26 at the distance over the “good” dirt surface. Locally based, the 5-year-old won the GIII Ack Ack S. last time out Sept. 29. “It seems we have some luck sneaking into races when we are on the outside looking in,” said trainer Dallas Stewart, who finished second in the Kentucky Derby in 2013-14 with longshots Golden Soul and Commanding Curve. “One thing we know for certain is that this horses loves this track. If we can’t get into the Classic, then we can run in the Dirt Mile. I think he’ll do great in either spot.”

Whitmore (Pleasantly Perfect), in company with stablemate Meanbone (Silver Train), breezed a half mile in :46.20 in preparation for the GI TwinSpires Breeders’ Cup Sprint. “I thought it was very good work,” said trainer Ron Moquett. “The most important thing was to get the safest and best track to work over and that’s why we went so early [track opening at 5:30 a.m.]. The time was quick but the most important thing was he did it on his own without any encouraging.” Whitmore worked inside of Meanbone through fractions of :11.40, :22.20 and :34, before galloping out five furlongs in 1:00.20. It was the fastest work of 26 horses at the distance.

With light rain falling at 9:45 a.m. at Churchill Downs Friday, Breeders’ Cup contenders Chelsea Cloisters (First Samurai), Forty Under (Uncle Mo), Pakhet (Cairo Prince) and Shang Shang Shang (Shanghai Bobby) recorded works over the “yielding” Matt Winn turf course. Trainer Wesley Ward’s Juvenile Sprint hopefuls Chelsea Cloisters and Shang Shang Shang breezed a half-mile in company in :50.80 and :51.40, respectively. Chelsea Cloisters, who is 13th on the preference list for the Juvenile Turf Sprint limited to 12 starters, began her breeze one length behind Shang Shang Shang and finished two lengths in front at the wire through splits of :13.80 and :26.80. “I think she liked the soft turf,” said jockey Tyler Gaffalione, who was aboard Chelsea Cloisters. “It was a really good work.” Eclipse Thoroughbred Partners’ Pakhet, runner-up in the GII Jessamine S. at Keeneland in her most recent start, worked a half-mile on the yielding turf course in :51.40 with exercise rider Juan Bernardini up, in preparation for the GI Juvenile Fillies Turf. Fractions on the work were :14, :27, :51.40 and out five-eighths in 1:06. “It looked like she handled it well,” said Ginny DePasquale, assistant to trainer Todd Pletcher. “Todd wanted to go easy.”

Working shortly before Pakhet was August Dawn Farm’s GIII Pilgrim winner Forty Under (Uncle Mo). With exercise rider Marquel Lemon aboard, Forty Under worked a half-mile in :52.20 with splits of :14.20, :28.20, :52.20 and out five-eighths in 1:05.60. “I brought him down early to get a work over the course,” trainer Jeremiah Englehart said. “I am glad they opened it up today, a week before the race, and that is perfect for us. He started off a little slow but that was fine and he finished up well.”

At Belmont, trainer Todd Pletcher sent out several contenders for their final pre-Breeders’ Cup works Friday morning. Entered for the GI Breeders’ Cup Juvenile Turf, Opry (Declaration of War), with regular rider Javier Castellano aboard, worked in tandem with Argentine-bred Smart Choice (Arg) (Grand Reward), who will race in the GI Filly & Mare Turf as the pair completed four furlongs in :48.02. “I thought it was a good and progressive work with a strong gallop out,” said Pletcher. “The turf course this morning was actually fairly firm considering it hasn’t been that way much of the meet, but we got what wanted out of it with both of them.” Looking to make his next start in the GI Breeders’ Cup Turf, GI Man O’War winner Hi Happy (Arg) (Pure Prize), accompanied by stablemate Blind Ambition, worked four furlongs in :49.04 on the Belmont main track Friday. The latter is hoping to draw into the field for the Turf Sprint. “I thought they both went well,” said Pletcher. “Hi Happy seems to have maintained his form. He didn’t seem to handle Saratoga particularly well, especially the [July 28 GII] Bowling Green [sixth] when it was very soft that day. I thought he ran well in the [Oct. 8 GII] Knickerbocker [second] at a distance that’s a little shorter than his ideal best, but I like the way he’s trained since then until now. We just have to see if we get a little lucky with the rain at Churchill, but we’ll worry about that at we get closer. With Blind Ambition, we’re kind of waiting to see if he can get in or not.”