Break Even Looks a ‘Day’ to Remember 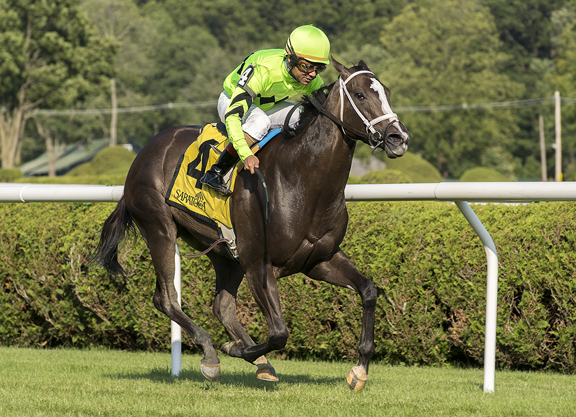 Everyone in this business understands that each day of joy tends to be earned by a month of strife. Seldom, however, do horses spin us between extremes at quite the giddy rate experienced by Richard Klein this summer.

Klein, whose stable builds on long groundwork by his late parents Bert and Elaine, had been struggling to draw attention to his homebred stallion Country Day (Speightstown). It was tough going for him at Crestwood, competing with all those big Kentucky farms, and this year Klein took the decision to transfer the 13-year-old to Peach Lane Farms in Louisiana, where he now stands at just $2,000. But at least his first big flagbearer was still going.

Will Call, bred from the family’s stakes-winning mare Vote Early (More Than Ready), had won a Grade III on the Kentucky Oaks undercard last year and went on to finish fifth in the GI Breeders’ Cup Turf Sprint–a race in which seven-time winner Country Day had himself enjoyed his finest moment, when second in the 2011 running.

On June 29, however, the cherished 5-year-old returned to Churchill Downs, and dropped dead–out there on Klein’s local track–after finishing down the field.

“Will Call meant everything to us,” Klein reflects. “He was the very first Country Day to win. His first stakes winner, and graded stakes winner. The first stakes winner the Kleins have ever had on Oaks or Derby day. So I was ready in my mind, if he didn’t run good that day, to go ahead and retire him. Send him up to Amy and Charlie LoPresti’s farm, with a couple of other retired horses I have there, let him have a life. And instead he dies of a heart attack. He was as sound as they come. It can be such a tough game.”

Just a few days later, however, Klein could exult in one of the most vivacious and dynamic performances of the Saratoga summer–by Country Day’s freakish new talent, Break Even. And the 3-year-old filly, who had progressed from a Fair Grounds maiden on January 1 to emulate Will Call with a Grade II success of her own on Kentucky Oaks day, in the Eight Belles S., will next bid to make it seven-for-seven in the GII Prioress S. on Aug. 31.

She really is an extraordinary creature, retaining an air of absolute leisure in setting the kind of fractions generally forged only by the frenetic, flat-out runaway type. And her Saratoga stakes win, in the $100,000 Coronation Cup S., showed that she is every bit as hard to catch on turf as she had previously been on dirt.

“Two weeks,” says Klein. “Two weeks between losing Will Call and winning that race. And the dam of Break Even, a mare we really liked, unfortunately we had to put her down at the beginning of the year. She was 20. So this filly is very special to us. Look, we’ve had a lot of very nice horses in our family, without ever putting up a lot of money at the sales: over 110 stakes winners, 28 in graded stakes. And this filly, she looks like she may be right up there with the most talented we have ever had.”

As it happens, Break Even’s mother Exotic Wager (Saint Ballado) was the most expensive horse the Kleins ever bought at auction, as a $285,000 Keeneland 2-year-old in 2001. At that stage, they were assembling what became a fairly boutique broodmare band, typically numbering a dozen or so. By breeding to race, they haven’t needed to supplement their stud for around 15 years now. Quite how it has sieved out a filly like this, however, is hard to fathom.

“The mare produced some hard-knocking claiming horses, and one that maybe won a cheap stake race somewhere,” says Klein. “I was just trying to support my stallion when he was in Kentucky, so I bred him to this mare. And Country Day, he was a nice horse. He’s well bred. His dam produced five stakes winners, including one that was a multiple graded stakes winner.

“So yes, I would hope some of it’s coming from the stallion. Maybe it was a good match. She has a yearling brother at the farm they say is beautiful. But I don’t know. So much of this game is luck. I mean, look at Mine That Bird (Birdstone). People go out and spend $800,000 for a horse and it can’t outrun you or me. And I go breed a horse like this, and she’s six-for-six.”

But whatever luck comes your way, you have to make the most of it. Klein should take some credit, then, for the patience that is the hallmark of his program.

“We try never to hurry them, try to give them the best opportunity to be horses,” he explains. “There’s a lot of turnout, they’re raised on a farm, kicked out at night while they’re being broken. And if doing what’s best means sending them home from the track, giving them a break, that’s what our philosophy has always been.”

Break Even duly took the time she was given to blossom. Sure, the Mitchells liked her well enough, raising her at Clarkland Farm; likewise Amy LoPresti, breaking her at Forest Lane; and Brad Cox’s assistant at Ellis Park, Tessa Bisha, albeit she had to back off a few shin issues.

“And then suddenly I’m hearing from Fair Grounds that Brad has nothing that can beat her,” Klein recalls. “They’re putting her up against colts, they’re breaking her out the gate. They had a real nice Tapit colt she breezed head-to-head with. And I just kept hearing better and better things about her.”

Country Day having operated well on the turf, Break Even was given her first entry on the same surface–only for the race to be moved onto the main track. “Which I guess was fortunate for us, because otherwise I’m not sure we’d ever have figured out to put her on the dirt,” Klein admits. “It turned out she loved the slop.”

She hasn’t looked back since, though Cox and Klein resisted the temptation to run her against her equally explosive barnmate Covfefe (Into Mischief) in the GI Test S.

“Brad says he wouldn’t be frightened to run her five and a half on turf, against the girls or the boys, anywhere in the country,” Klein explains. “But seven furlongs on a deep and cuppy track like that? And I knew down deep Brad didn’t want to race them against each other, while the turf was always going to suit her. So he said, okay, let’s do that–but then bring her back at the end of the meet for the Prioress, on the dirt.

“Shaun Bridgmohan [her jockey] says she’s very smart, very laidback. She gets a little geared up going into raceday, but never stupid, doesn’t wash out or anything. She’ll do whatever you ask of her. Shaun says she doesn’t need to lead, she can rate. It’s just she’s so quick out of the gate, after her third, fourth step she’s two in front. And she can run on anything. She’s won at five different racetracks, on dirt, turf, slop, everything.”

“His stats are unbelievable,” enthuses Klein. “Besides the two graded stakes winners, he has had another stakes winner for us. He’s stamping every one of his horses with that big rear end of his. They all have good bone to them, they’re laidback, they’re smart. And they’re versatile like he was. He won stakes on three different surfaces. But they don’t tend to be too early, and that’s the problem when people want to start horses in May. But the breeding program is good in Louisiana, so we’ll see what happens down there.”

Country Day was bred from the Mt. Livermore mare Hidden Assets, who was another Keeneland 2-year-old, at $230,000, when the Klein family were seeding their stable in 1999. She won a Grade III on dirt at Gulfstream and, as already noted by Klein, proved a fertile producer of good winners. In 2016, in fact, two of her daughters won stakes on the same day.

The next dam, an unplaced daughter of Roberto, was a half-sister to a couple of graded stakes winners and also to the dam of GI Preakness winner Codex (Arts and Letters). It’s also the family of a triple Group 1 winner in Europe, Oratorio (Ire) (Danehill), but perhaps the most striking ingredient in his pedigree is the fact that the granddams of both Speightstown and Hidden Assets were by Tom Rolfe’s half-brother by Bold Ruler, Chieftain.

This source of durability and speed might not ring too many bells nowadays, but just take a look at the first three dams of a great stallion who famously traded in toughness and class, Giant’s Causeway: they are respectively by Rahy, Roberto and Chieftain. Now look at Country Day. His damsire Mt. Livermore, like Rahy, is by Blushing Groom (Fr); and his next two dams are by Roberto and Chieftain. The echoes go deeper still, as Country Day’s fourth dam was by a son of Heliopolis, who was also sire of the fifth dam of Giant’s Causeway. Where the lines do part is at Country Day’s fifth dam, but that’s no bad thing because she is Calumet’s Hall of Famer Real Delight, one of three Kentucky Oaks winners out of Blue Delight.

For whatever it may be worth, moreover, the daughter of Chieftain who produced the dam of Country Day’s sire Speightstown did so with Storm Cat–the sire, of course, of Giant’s Causeway. So, all in all, maybe it’s not quite such a mystery if Country Day has really pulled a monster out of his hat in Break Even, despite her own fairly plain antecedents. (Though a curiosity worth noting is that her fifth dam is by none other than Chieftain.)

But even if Country Day can’t get sufficient traction in Louisiana to keep punching above his weight–after all, he never even won a graded stakes himself–then Klein is determined to enjoy the ride.

“Country Day always meant a lot to us,” Klein says. “He was named after the school my kids went to, here in Louisville. And even though my parents are no longer here, I still view them as part of our stable. There’s no better way of honoring my two best partners, and now my kids want to get involved too: my daughter is finishing her internship in large animals, and wants to be in equine surgery, and my son’s in sports management.

“We have always kept everything we breed, to race. We only ever sold one horse at the sale. That was probably over 15 years ago, when we were told we had to sell–and we got $1.9 million! But other than that, what we see is what we get; whatever happens, happens. So much breeding is now commercialised, all about the sales ring. To see these new stallions book 150 mares in North America, and then shuttle to the Southern Hemisphere, it’s ridiculous. And unfortunately it’s the smaller stallions like Country Day, and the proven stallions on the racetrack, that get lost in the shuffle.

“But now we’ve got this filly and it’s a neat story. I’m not selling her. I’ve been approached by a few people but she’s going to be part of my broodmare band. Nor do I have an ego in this game that I have to be seen in those Grade I races. We’ll just keep running her in the best spots we can, and see how it all shakes down.”