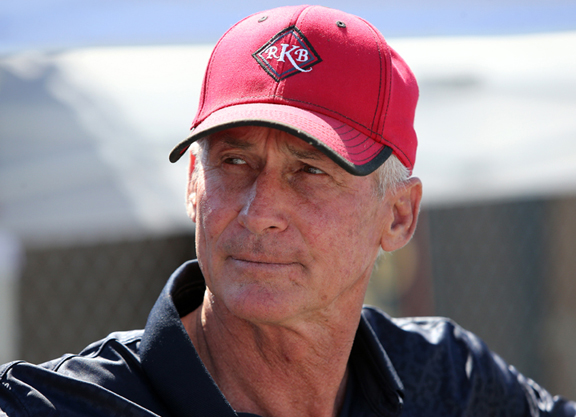 Two years ago, consignor Randy Bradshaw came into the Fasig-Tipton Gulfstream Sale with a colt by Blame the barn had nicknamed “The Beast.” The juvenile turned in a :10 flat furlong breeze during the sale's under-tack show and justified his consignor's faith in him when selling for $700,000 to bloodstock agent Kerri Radcliffe. Named Nadal, the colt went on to win three graded races topped by a division of the 2020 GI Arkansas Derby. After a year's absence due to the pandemic, bidding returns to Gulfstream Park this week and Bradshaw's eight-horse 2021 consignment comes neatly packaged inside a catalogue with Nadal's picture front and center on the cover.

“We always enjoy going down there,” Bradshaw said of the Gulfstream sale. “There are a lot of expectations because we try to pick some of our better horses to go down there. This year's group is probably as strong a group as I've taken down there, so we are pretty excited at this point. They all prepped well down there. They just have to do it Monday and I'd be surprised if they didn't show up.”

Bradshaw's Gulfstream contingent includes a pair of fillies by Triple Crown hero American Pharoah. Hip 97, a $150,000 purchase at last year's Fasig-Tipton Selected Yearling Showcase, is out of Crying Shame (Street Cry {Ire}), a daughter of multiple Grade I winner Tout Charmant (Slewvescent). Hip 150, who RNA'd for $70,000 at the showcase, is out of Let Joy Reign (Awesome Again) and is a half-sister to multiple stakes winner Celtic Chaos (Dublin).

“A lot of international buyers–especially the Japanese–have really taken a liking to American Pharoahs,” Bradshaw said.

While he didn't have a consignment at the OBS March sale, Bradshaw agreed he was heartened by the activity of Japanese buyers at the first 2-year-old sale of the season. The top two offerings at OBS were both purchased by Japanese interests, including a filly by American Pharoah purchased by Eugenio Colombo on behalf of Shadai's Teruya Yoshida for $600,000.

“The Japanese buyers showed up here at the OBS sale, and from what I've heard from several people who buy for them and work with them, they never got half their money spent,” Bradshaw said. “So we are looking forward to hopefully selling them a couple.”

“We have a Classic Empire who has a great pedigree,” Bradshaw said of hip 177. “And he's a really, really nice colt and he might fit a lot of American buyers here that like the look of a dirt horse.”

The first-crop son of juvenile champioin Classic Empire is out of Mriya (Elusive Quality) and RNA'd for $345,000 at the showcase last fall.

Bradshaw continued, “And we have a nice Lord Nelson filly (hip 40). That sire has been highly received so far. They haven't run yet, but going into the sales last year, everybody liked the Lord Nelsons.”

Out of Sweetness 'n Light (Distorted Humor), hip 40 is a half-sister to graded placed Stormy Sky (Sky Mesa) and was a $60,000 Fasig showcase yearling.

The freshman sire contingent is completed by hip 80, a daughter by the late Arrogate out of multiple graded stakes winner Bsharpsonata (Pulpit).

“The Arrogate filly is almost 17 hands tall, but she is a fast for a big girl,” Bradshaw said. “It's surprising. She is big and she's quick and a really beautiful filly.”

Rounding out his consignment, Bradshaw said, “I have a Union Rags colt (hip 167) that I absolutely love. He's a grand-looking horse who has worked really well. Then I have an Into Mischief colt (hip 61) who worked lights out down there and he's a big strong, good-looking horse. And I have an Uncaptured filly (hip 23), same thing, she worked lights out down there. We paid a lot of money for her, but she acts like she could be any kind. It's a really nice family, the mare has produced graded stakes horses. She definitely has the license because she looks the part, she's a big, beautiful filly.”

After a 2020 juvenile sales season of fits and starts, buyers seemed anxious to jump back into the fray at OBS and Bradshaw hopes that trend continues in South Florida this week.

“There was a lot of excitement and a lot of people at OBS,” Bradshaw said. “I didn't have anything down there, but from everything that I heard, every consignor seemed like they were just slammed. That's a good thing. Horses sold well. We had a lot of middle market horses who sold well, which is a good sign. So I have a lot of expectations that this is going to be a really good sale.”

Reflecting on how he felt heading into the Gulfstream under-tack show with Nadal two years ago, Bradshaw said, “I knew we had a good one. His nickname around the barn was the beast. And that's what he was. He was a big, strong, powerful horse. I have a couple that might be that good in this group. Hopefully, they will show up like he did. Because he was one of those horses that, every time you pulled the trigger, he was right there.”

The under-tack show for the Fasig-Tipton Gulfstream gets underway Monday at 9 a.m. The sale will be held Wednesday in the track's paddock with bidding beginning at 2 p.m.