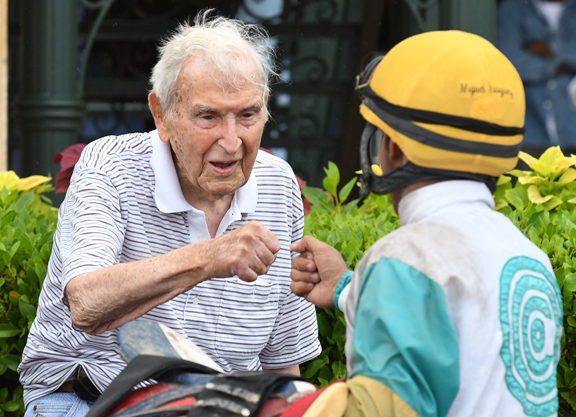 Jerry Bozzo became the oldest trainer in Thoroughbred racing history to record a win at Gulfstream Park Saturday afternoon. The 96-year-old, who saddled Cotton Tooyah (High Cotton) in the day's second race, surpassed Noble Threewitt, who last visited the winner's circle at Santa Anita in 2006. He was 95 at the time.

“People say to me, 'What the heck are you doing out there at that age, standing at the rail?'” said Bozzo, who celebrated his 96th birthday last Oct. 25. “I'm enjoying it–that's why I'm doing it.”

Involved in racing as a breeder and trainer in Florida since the 1970s, Bozzo is a retired aeronautical engineer, industrialist and World War II vet, who sold his Pennsylvania bottle manufacturing company in 1969.

Bozzo also holds the distinction of being the olderest trainer to saddle a stakes winner–homebred Flutterby (Congrats)–victorious in the Sea Lily S. at Gulfstream May 30, 2015. She also finished runner up in the GII Princess Rooney in addition to winning two more stakes.