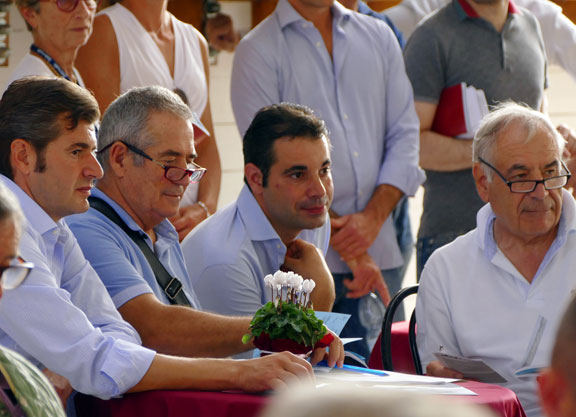 The Botti family at the SGA Yearling sale | Emma Berry

MILAN, Italy–A giant racing mural outside Milan's iconic restaurant which bears his name ensures that the legendary Italian-bred Ribot won't be forgotten any time soon. And while the Italian racing and breeding industry continues to face funding problems, a reminder of the country's breeders' ability to produce top-class horses has been issued this season via the dual Oaks victrix Sea Of Class (Ire) (Sea The Stars {Ire}).

Trained by William Haggas in the colours of the Tsui family's Sunderland Holdings, Sea Of Class was bred by Razza Del Velino, the breeding base of the Botti family at Rieti, some 50 miles to the north-east of Rome.

It is impossible not to know the name Botti in Italian racing. When former jockey and trainer Edmondo Botti died in 1969, he left his racing stable to his sons Giuseppe and Alduino, at that time both jockeys themselves. Over the decades to follow, training in partnership, the brothers dominated the country's racing scene, landing their first championship in 1973 and rarely relinquishing the title to their rivals.

While Giuseppe and Alduino are still both involved in the training business, to some extent they have been usurped by their own sons–two each, in the theme of family continuity. Stefano, the eldest son of Alduino, is currently the leading trainer in Italy, with stables in Milan and Pisa, and Giuseppe's son Edmondo (Endo), also trains successfully in Pisa. Their younger brothers have spread their wings farther. Stefano's brother Marco quickly became renowned for his international exploits from his base in Newmarket, and Endo's brother Alessandro is one of a number of Italian ex-pats training in France, along with Simone Brogi and Andrea Marcialis.

The family's breeding interests run to some 60 mares, the majority based at Razza del Velino, while some board in England and Ireland. Holy Moon (Ire) (Hernando {Fr}), the 18-year-old dam of Sea Of Class whose breeding record is now the stuff of legend in Italy, boards at Castlehyde Stud in Co. Cork, where she has a Golden Horn (GB) colt foal at foot and is in foal to Churchill (Ire).

Sea Of Class is the fourth daughter of Holy Moon to have the word 'Oaks' appear in her tally of victories. Three of her elder half-sisters–Cherry Collect (Ire) (Oratorio {Ire}), Charity Line (Ire) (Manduro {Ger}) and Final Score (Ire) (Dylan Thomas {Ire})–have won the Oaks d'Italia, which, in line with all of Italy's Group 1 races bar the Premio Lydia Tesio, has suffered the indignity of a downgrade in status and has been run as a Group 2 since 2006. Charity Line and Final Score have also both won the G1 Premio Lydia Tesio, while their half-brother Back On Board (Ire) (Nathaniel {Ire}) was runner-up in the G2 Derby Italiano. The Group 3 winner Wordless (Ire) (Rock Of Gibraltar {Ire}) and listed-placed Magic Mystery (GB) (Pour Moi {Ire}) bring Holy Moon's tally of black-type-earning offspring to seven.

“We're delighted that this family has done so well in Italy and of course it has been made even better this year with Sea Of Class. To win a Classic abroad is more than you can wish for,” said Alduino Botti during last week's SGA Sale in Milan, at which Razza del Velino was the largest consignor.

Holy Moon is not the first Botti mare to have produced multiple black-type winners to have shown their talents in Italy and beyond. Claba Di San Jore (Ire) (Barathea {Ire}) is the dam of Jakkalberry (Ire) (Storming Home {GB}), a Group 1 winner in Italy for Endo Botti who went on to win the American St Leger, G2 Dubai City Of Gold and finish third in the G1 Melbourne Cup when switched to Marco Botti in Newmarket. She also produced G1 Premio Presidente della Repubblica winner Crackerjack King (Ire) (Shamardal) and G1 Derby Italiano hero Awelmarduk (Ire) (Almutawakel {GB}) among her six black-type earners. In 2012, the mare was sold for 575,000gns to Watership Down Stud.

Alduino continued, “Holy Moon is a very important mare for our stud, just like Claba Di San Jore (Ire) was. I had hoped that with all the good publicity for Sea Of Class before the sale [in Milan] it would help to bring more buyers to Italy but unfortunately the atmosphere is still quiet and it hasn't really picked up.”

Sea Of Class was bred as a foal-share with the Tsui family, who bought out the Bottis at the Tattersalls December Yearling Sale for 170,000gns. During Book 1 of the October Sale, her half-brother by Oasis Dream (GB), who has been named Honor And Pleasure (GB), will be consigned by Jamie Railton as lot 404.

“Sea Of Class was fairly small as a foal and she was a late foal but she has done so well and it makes us very proud,” said her breeder, who trained her dam Holy Moon–from the family of another Oaks d'Italia winner Bright Generation (Ire) who later featured as the grandam of Dabirsim (FR)–to win five races, including the listed Premio Terme di Merano.

“An even bigger satisfaction for us was the fact that we bought Holy Moon for just IR2,600gns,” he added. “She was a very good racehorse, but what she has done for the stud has been incredible.”