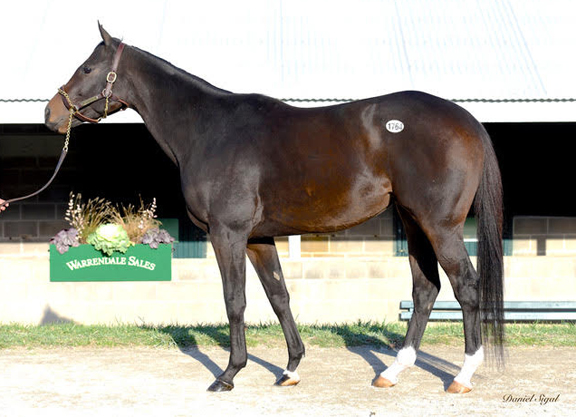 LEXINGTON, KY – The Keeneland November Breeding Stock Sale's two-session Book 3 section concluded with another day of steady trade Friday in Lexington. Bill Betz made the day's highest bid, going to $270,000 late in the day to acquire the racing/ broodmare prospect Divine Queen (Divine Park) from the Trackside Farm consignment. The mare was one of four to bring $200,000 or more during the session. While only 292 of the 401 catalogued head went through the ring Friday, 235 sold for a buy-back rate of just 19.52%.

“It was a lot better than I anticipated,” Summerfield's Francis Vanlangendonck said of the November market. “For the babies, it's been really, really good. The weanlings sold much better today than earlier in the week. Yesterday we averaged about 80 showings per weanling for horses we were selling today. The buyers were pretty aggressive. It seems like for these lower-valued weanlings there is a world of people wanting to buy. With people worried about what the markets were going to be like, there were a lot of scratches. Those well-conformed weanlings that vetted good sold really well. Even some that had issues are starting to sell. I looked at the outs, so by the time we got to the sales ring, I knew where we were. I knew there would be a market, but thought it would be a little timid… when the supply started lowering, I felt we might do OK. Even with the mares I thought they did well. We sold every horse we put through the ring. We had gotten beaten up pretty good in September and October and we were having to sell to make sure we had money for stud fees and to keep going.”

Reiley McDonald of Eaton Sales said there was still demand for the right type of mares and weanlings.

“The mares that are legitimate, there are buyers here for them and Book 3 has still been good,” McDonald said. “There are horses that just have holes in them, they are a little old or the foals don't vet right, there is no market for those. The weanling buyers are not putting up with any veterinary flaws. That always happens in a tight market. If you jump through the hoops–you're a nice physical and you're clean–then you will get as much here as you will for a yearling. There is money out there and people get hungry. Everybody gets shuffled back by the earlier higher-priced horses and get hungry in Books 3 and 4 because the pinhookers make their living reselling the foals.”

The Keeneland November sale continues through Wednesday with sessions beginning daily at 10 a.m.

Bill Betz struck late to secure Divine Queen (Divine Park) (hip 1764) for a session-topping $270,000 Friday at Keeneland, signing for the mare in the name of Avout Bloodstock. Tom Evans's Trackside Farm consigned the 5-year-old racing or broodmare prospect on behalf of co-owner/breeder and trainer Buff Bradley.

“We bred her, foaled her, raised her and raced her and we just sold her,” said Bradley. “Pretty much like we did [two-time sprint champion] Groupie Doll. We were very excited to race this filly and then sell her as a mare and know she was going to go somewhere good.”

“She had a lot of class,” Bradley said. “She showed it in the ring, walking up here, she's just all class. And a very sound race mare. Never once did she have a problem. I think we are very proud of that. We bred a nice, sound racehorse.”

From the same family, Bradley and Hurst bred stakes winner and graded placed Queen's Award (Medaglia d'Oro), a half-sister to Divine Queen, and also bred and campaigned multiple graded winner The Player (Street Hero), who is out of a half-sister to both mares.

“We have a lot of the family and we have to keep the cash flow going and get ready for the young ones coming along,” Bradley said of the decision to sell the mare.

Of the mare's session-topping final price, Bradley said, “It was a bit more than what we were thinking, but we're very happy with it.”

“The update is just huge,” Cary said after signing the ticket on the mare, who was consigned by Taylor Made Sales Agency. “That filly ran such an amazing race in the Breeders' Cup and winning the Frizette. It gives us a nice filly to root for next year.”

“The mare was gorgeous,” Cary continued. “She was an expensive yearling herself. We will breed her to a really nice stallion and have options moving forward.”

As the November sale continued through Book 3, Cary said there was still plenty of competition.

“There are still a lot of top agents and buyers here,” he said. “It's been that way throughout the sale. You just have to follow them up and some you get and some you don't. You just hope you land on the right number on some of them. We got outbid on probably 10 horses yesterday. It's very competitive for these kind of long-term mares. There is a lot of competition for those and it bodes well for the bloodstock industry down the road.”

Headley Bell purchased a colt by Nyquist for $225,000 and the weanling (hip 1586) is part of a pinhooking partnership he has been busy buying for at the Keeneland November sale.

“I liked that he was an athlete and I liked the family,” Bell said. “And obviously we like Nyquist. It's hard to ignore the start he has made. We put together a partnership and we are just trying to put some athletes in the bucket and see if we can get lucky.”

The chestnut is out of the unraced Senorita Corredora (El Corredor)–a $150,000 Keeneland September yearling purchase in 2010–and he is a half-brother to multiple stakes-placed Holiday's Angel (Harlan's Holiday). Bred by Gary and Anne Smith's Elm Racing and Mulholland Springs, the weanling was consigned by Mulholland Springs.

“The sire is obviously doing well with the Breeders' Cup winner [Vequist],” said John Mulholland. “It all fell into place. The colt vetted well and presented himself well, and we had all the right buyers on him. We bred him in partnership with some clients of ours, Gary and Ann Smith of Elm Racing. I actually bought the mare for the Smiths as a yearling and she got a tendon injury and never made it to the races. She was a breeze or two away from running. They have raced all the foals and want to do more racing, perhaps claim some horses or buy some 2-year-olds, and that is why we went ahead and sold the mare and the foal. Happily, I found another client to buy the mare and keep her on the farm, which makes me happy.”

“We feel like there is potential opportunity,” he said. “We'll see. Coming into the sale, we thought it might be somewhat depressed, but I don't feel that it is at all, to be honest with you.”

Weanling-to-yearling pinhookers have come up against plenty of competition from end-users at this week's Keeneland November sale, particularly from Larry Best's OXO Equine, which has purchased eight foals.

“For Larry Best to come into the weanling market as strong as he is, he is obviously very competitive and makes it tough,” Bell said. “But listen, we are all trying to do the same thing.”

A pair of weanlings by young Coolmore sire Practical Joke set the pace for foal prices early in Friday's session of the Keeneland November sale. Brian Graves of Gainesway went to $185,000 to acquire a colt by the Grade I winner (hip 1512) from the Eaton Sales consignment. Bred by Forging Oaks, the pinhooking prospect is a half-brother to multiple graded winner Secret Gypsy (Sea of Secrets).

“I bought Practical Joke as a yearling, so if anybody was going to be inspired to stretch for them a little bit, it's me,” Graves said. “They've all been well-balanced, good movers and athletic. You've got to believe in Into Mischief and Practical Joke has a good chance. Hopefully, he will come out with some early runners and we'll be in good shape.”

Graves purchased Practical Joke for $135,000 at the 2015 Keeneland January sale and resold him for $240,000 at that year's Keeneland September sale. The stallion, whose first foals are yearlings, won the GI Champagne S., GI H. Allen Jerkens S. and GI Hopeful S.

“I was happy with the price,” Eaton Sales' Reiley McDonald said of the transaction. “He is a really nice physical horse and those can go for anything above what you're expecting when they are that good. His sire has been doing well, with one a couple hips before him that also sold well. He was the best horse we had physically.”

Just a few hips before Graves made his purchase, Larry Best's OXO Equine went to $150,000 to acquire a filly by Practical Joke (hip 1510) from the Brookdale Sales consignment. The chestnut filly is out of the unraced Miss Prytania (Eskendereya), a half-sister to graded winners Medal Count (Dynaformer) and Garden District (Dixie Union). She was bred by J.R. Ward Stables.

Graves agreed the weanling market has been very competitive this week in Lexington.

“I am not shocked,” he said of the strong weanling market. “Everybody saw there were fewer on offer and maybe the nice ones that have come through have been fewer and farther between. The laws of supply and demand take over.”