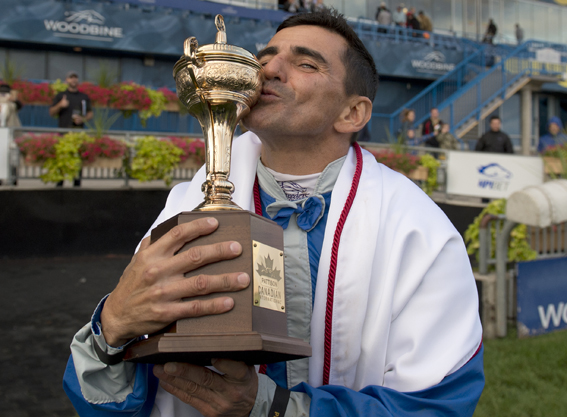 To the outside world, Eurico Rosa Da Silva came off as a good-natured, level-headed jockey whose natural talent led him to the top of the standings at Woodbine Racetrack and to seven Sovereign Awards as Canada's champion rider. But underneath that veneer was a person whose anger and troubled past had consumed him, nearly leading him down a path to total destruction.

Da Silva rose from the poverty of a small town in Brazil to become the dominant rider in Canada before retiring in 2019. But that's not what his autobiography, “Riding For Freedom,” is about. Instead, it is an honest and thought-provoking look at one's demons, how and why a life can unravel and what it takes to put it back together again. A horse racing story this is not.

In time, Da Silva would come to understand just how toxic and damaging his relationship with his father had been. His father was so verbally abusive that Da Silva describes his actions as “emotional warfare.” He writes that his father tormented him, made fun of his size, challenged his sexuality and did whatever he could to diminish him.

His father was also a womanizer who, Da Silva writes, raped his babysitter when she was just 13.

Da Silva found his escape. As a young child he started off riding donkeys at an uncle's farm before he graduated to galloping quarter horses for a local trainer. His big break came when he was accepted to the Brazilian jockeys' academy. After graduating, he became the top apprentice in his native country.

But he could not find happiness.

“It consumed me, the negativity and its energies,” he writes of his anger. “I was miserable and I couldn't shake it.”

Da Silva convinced himself that he was worthless. “I never felt that I had anything to offer,” he writes.

Certain that he was not worthy of being loved, he didn't seek out a traditional relationship with a woman. Rather, he went for one tryst after another with prostitutes, something he continued to do well into his many years riding in Canada. To compound his problems, Da Silva developed an addiction to gambling.

Yet, he remained generous and kind. He befriended a child with cerebral palsy and learning difficulties who would often come to the track with his parents. So concerned about the welfare of the horses he rode, Da Silva, after learning that an owner wanted to have a horse put down, paid for its surgery and arranged for it to be retired at the LongRun Thoroughbred Retirement Society.

Da Silva would leave Brazil to start riding in Macau, where he rode for four years. It was there that he met his first wife, Claudia. In 2004, he came to Woodbine.

Amid all his troubles, Da Silva never let up when it came to his burning desire to succeed. He had pursued the dream of becoming a champion rider since his childhood and nothing was going to stop him. Starting off as an unknown at Woodbine, he struggled his first few years there, but gradually worked his way into the top barns on the grounds and, in 2010, won his first Sovereign Award.

But nothing that Da Silva did on the track provided any relief for his inner turmoil. He won his first Queen's Plate in 2009 aboard Eye of the Leopard (A.P. Indy) but would find no solace in the accomplishment.

He had been working with a sports psychologist to try to deal with his problems, but found that it wasn't getting him anywhere. He moved on and found a new therapist, one who specialized in sex addiction. He also entered into a divorce with his first wife and entered into a relationship and eventually married an equine surgeon named Orlaith Cleary.

His release from his demons came all at once, when he realized he did not want to kill himself but wanted to kill the father that was within him. He was able to put aside painful memories of his childhood and replace them with pleasant ones, playing with toys and happy to be alive.

“I might have won the Queen's Plate twice and been the best jockey in the country for years, but that was nothing compared to winning my freedom,” he writes. “It was the greatest achievement of my life.”

After the 2019 racing season, another in which he led all jockeys at Woodbine with 182 wins, Da Silva retired. He was just 44 and still at the top of his game, but he wanted to step away to do something else with his life. He became a certified life coach and his clients include other professional athletes. He hopes to impart on them the wisdom he gained through his personal struggles. Which are, he says, a thing of the past.