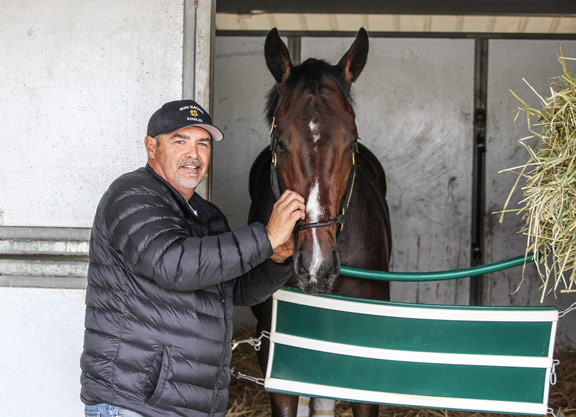 MGISW Bolt d'Oro (Medaglia d'Oro–Globe Trot, by A.P. Indy), who covered his first mares this year at Spendthrift Farm in Kentucky, will shuttle to Spendthrift Australia for the upcoming breeding season. A service fee has been set at $13,750 Inc. GST which will be payable on live foal terms.

“Bolt d'Oro will be the highest-profile stallion to shuttle to Spendthrift Australia since we've opened our doors, and we believe he'll be very attractive to our market,” said Garry Cuddy, Spendthrift Australia general manager. “It all starts with his two-year-old form. Bolt d'Oro is widely regarded as one of the best U.S. two-year-olds of the last decade, winning a pair of respected Group Ones in very fast times and dominating fashion. He is by a proven outcross sire in Medaglia d'Oro, who needs little introduction here when it comes to his ability to sire high-class two-year-olds, and he is completely free of Danehill or Danzig blood. Bolt d'Oro established himself as one of the most popular first-season stallions in the U.S. this year, and we very much look forward to being able to show him to our breeders.”