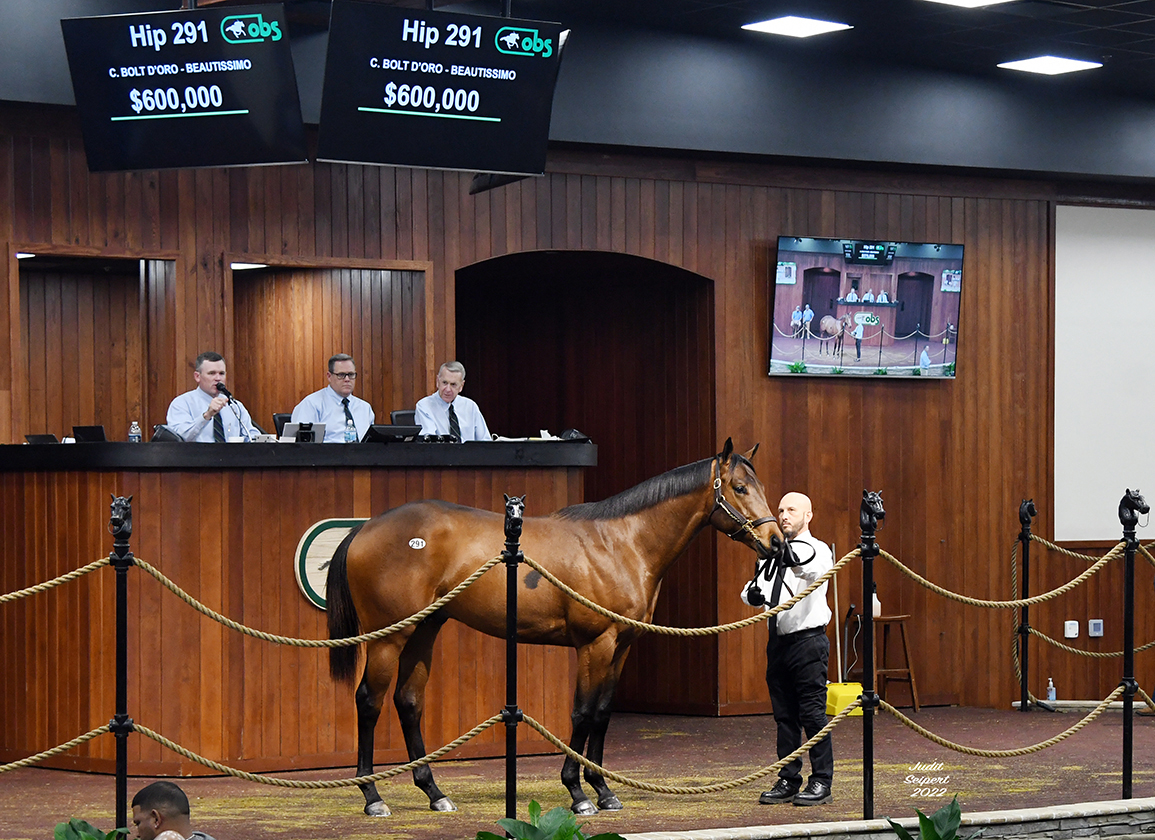 Arman selling at OBS this past March | Judit Seipert

5th-CD, $120K, Msw, 2yo, 5f, post time: 6:56 p.m. ET
ARMAN (Bolt d'Oro) has drawn widest in what appears a very salty field of 12 as he looks to become a seventh first-crop winner for his Spendthrift-based stallion. Bought back on a bid of $52K at the 2021 OBS October sale, the Jan. 25 foal one of just four horses to breeze a furlong in :9 4/5 at this year's OBS March sale and was hammered down to Kaleem Shah for $600K, one of seven of the 49 Bolt d'Oro juveniles reported as sold to fetch $500K or more this year. The Florida-bred is out Beautissimo (Uncle Mo), an unraced half-sister to the stakes-winning and multiple graded-placed dirt router Two Thirty Five (Stay Thirsty). Other first-timers with significant pedigree appeal include Tulsan (Into Mischief), a full-brother to debut romper and fellow Spendthrift sire Maximus Mischief; the Valentine's Day-foaled How Did He Do That (Good Magic), whose stakes-placed dam Stormin Maggy (Storm Cat) is a half-sister to dual Classic winner Afleet Alex (Northern Afleet) and his SW/MGSP full-brother Unforgettable Max; and Sivako (More Than Ready), a half-brother to dual Grade II-winning dirt marathoner Lone Rock (Majestic Warrior) and to last year's Tempted S. winner and GI Frizette S. runner-up Gerrymander (Into Mischief). TJCIS PPs

After a couple of fillies for Bolt this is the first reported colt. Beautissimo a daughter of Uncle Mo is the dam. @spendthriftfarm @ShelbeRuis pic.twitter.com/gTq7BVL2OW

This story was posted in Shared News and tagged Arman, Bolt d'Oro, Churchill Downs, Horse Racing, How Did He Do That, insights, OBS March, OBS October, Sivako, Spendthrift Farm, Tulsan.