Bolt d'Oro Colt Looks To Double Up in Japan 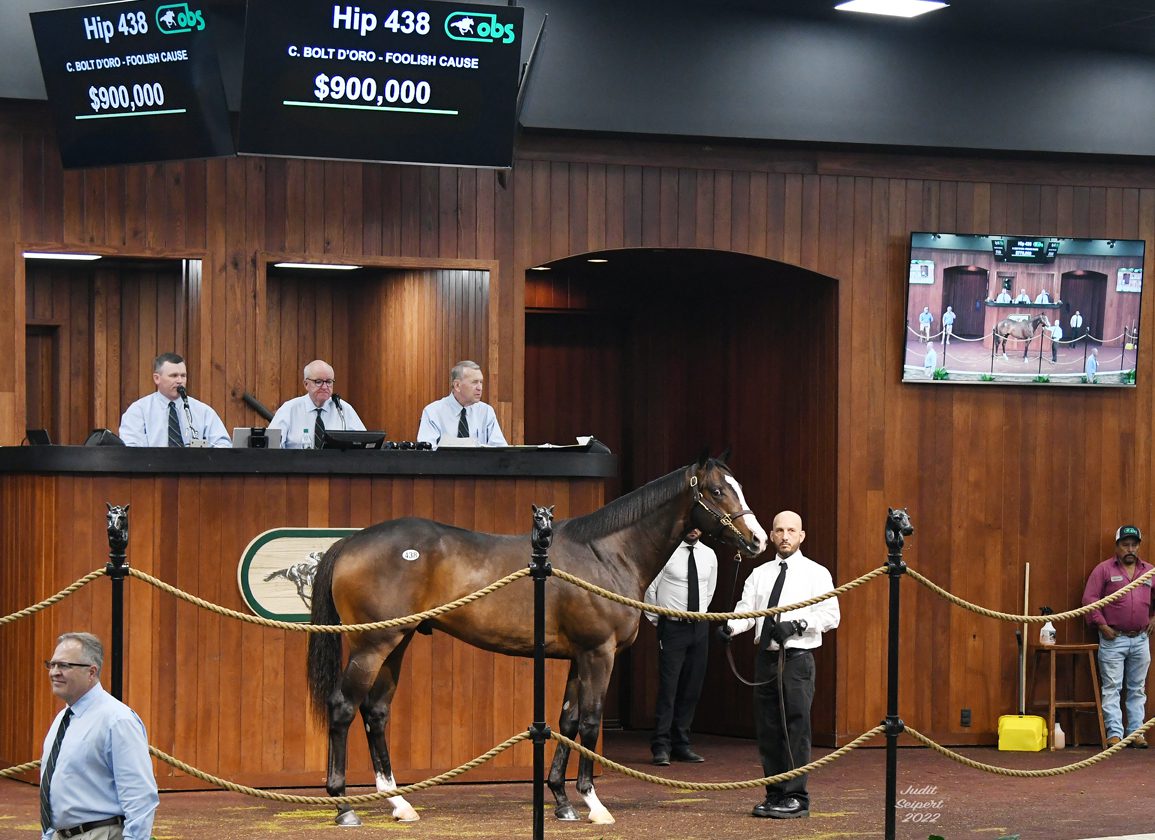 From Dusk at OBS | Judit Seipert

In this continuing series, we take a look ahead at US-bred and/or conceived runners entered for the upcoming weekend at the tracks on the Japan Racing Association circuit, with a focus on pedigree and/or performance in the sales ring. Here are the horses of interest for this Saturday running at Chukyo and Nakayama Racecourses:

Saturday, September 24, 2022
4th-CKO, ¥13,400,000 ($94k), Newcomers, 2yo, 1400m
CELADONITE (JPN) (f, 2, Mendelssohn–Celadon, by Gold Halo {Jpn}) is the first Japanese-foaled produce for her well-traveled dam, whose best produce to date was the very talented Copano Kicking (Spring At Last), a three-time Group 3 winner in Japan and a veteran of three starts overseas, including a thrilling victory in the Riyadh Dirt Sprint in 2021. A sound fourth in defense of that title this past February, he was injured in the days leading up to this year's G1 Dubai Golden Shaheen and was retired. Celadon was sent to India in 2016 and produced two winners from as many foals in that country, then returned to the U.S. in 2019 where she was covered by this sire and subsequently exported to Japan. Celadonite debuts in the colors of Silk Racing and has Christophe Lemaire in the irons. B-Northern Racing

5th-CKO, ¥13,400,000 ($94k), Newcomers, 2yo, 1400mT
RAIJIN (JPN) (c, 2, Speightstown–Kensington, by Kitten's Joy) is the first foal from a winning daughter of Irish Group 3 winner Rum Charger (Ire) (Spectrum {Ire}), who counts four-time Grade I winner Winchester (Theatrical {Ire}) and dual Grade III winner Middleburg (Lemon Drop Kid) among her seven to taste victory at least once. Kensington was purchased for $130,000 with this foal in utero at the 2019 Keeneland November Sale, was shipped to Japan and produced this chestnut colt on St. Patrick's Day 2020. Raijin was offered at the 2021 JRHA Select Sale, where he was hammered down for the equivalent of $245,095. B-Yuki Dendo

9th-NKY, ¥30,400,000 ($213k), Allowance, 2yo, 1200mT
FROM DUSK (c, 2, Bolt d'Oro–Foolish Cause, by Giant's Causeway) may not have been at his very best over a yielding turf course on Kokura debut Sept. 3, but managed to tough it out for a 3/4-length victory (video, SC 6). The April foal, a half-brother to SW Foolish Humor (Distorted Humor), is out of a half-sister to the late MGISW Get Stormy (Stormy Atlantic) and fetched $900,000 from trainer Hideyuki Mori at this year's OBS March Sale after making $200,000 as a Keeneland September yearling last fall. B-Springhouse Farm (KY)