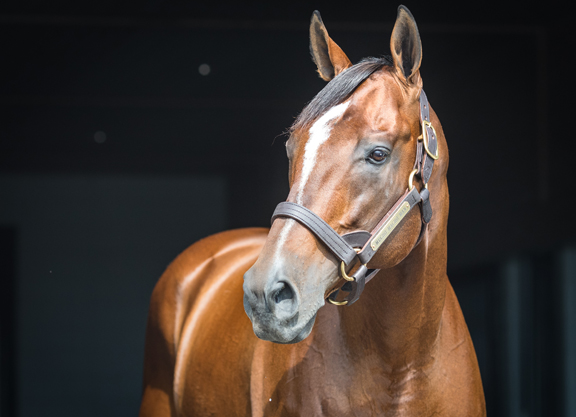 Historians are most likely to agree that the 1850s were probably the true beginning of the immigration era in the United States. Not only was this the decade in which the Irish made their first forays to this these shores due to the potato famine, but also the Germans began to flock here to be followed by the Italians, Polish, Greeks, Hungarians-representing the Catholic, Protestant and Jewish religions. This went on to the 1920s when assimilation took hold and the modern American character was developed.

Why bring this up? Well, if you looked at the top of the Leading Sires and Leading Third Crop Sires lists at the end of January you would have noted that due for the most part to his victory in the GI Pegasus S., Mucho Gusto propelled his daddy, Mucho Macho Man, to the top of the pile. And therein lies a tale of Thoroughbred immigration which is totally unique and extraordinarily robust, beginning in 1858 with the arrival on these shores by a horse named *Eclipse. No, not the Eclipse who was born a century earlier than this foal of 1855–who was a decent racehorse in England by Orlando–the latter who won the Epsom Derby on disqualification and was deemed by many as an extraordinarily beautiful specimen.

*Eclipse came to these shores as a 4-year-old after having been sold the previous year to the legendary breeder Richard Ten Broeck following a fourth-place finish in the Derby. Broeck sent him to Francis Morris's Throggs Neck Stud in Westchester County, New York, up the road from the bridge of that name (minus one “g”) which graces your correspondent's residence view. After one year, Broeck moved *Eclipse to Dixiana Farm in Kentucky before selling him two years later to Mr. Morris. The latter sent him first to New Jersey and then back to Throggs Neck after the stallion had made quite an impact with his son Alarm, a foal of 1869 who was foaled near that farm and who according to his biography in Thoroughbred Heritage was “considered to be the first great American sprinter.”

Alarm turned out to be the most successful and longest lasting line-founding American-bred stallion of the 19th Century and he did it through one son, Himyar, who established two branches, one of which is almost gone and the other which is still chugging along. The former branch, through Himyar's brilliant but short-lived son Domino produced Colin, Celt, Commando, High Time, Black Servant, Black Toney, Bimelech, Blue Larkspur, Balladier, Double Jay, Pennant, Peter Pan, Equipoise, Sunrise Flight, Bagdad, Battle Joined, Ack Ack, Broad Brush, Include–most of whom stood in Kentucky and many with similar pedigree patterns including inbreeding to Domino. To the best of our knowledge, Include at Airdrie Stud in Kentucky and Redeemed, a son of Include who stands in Maryland, are the most successful members of this tribe in tail male active at stud.

Then there was Plaudit, who won the Kentucky Derby in 1898, and his best son, the big and robust King James, a foal of 1905 who was inbred to Himyar who became Champion Older Horse in 1909. Among his 10 stakes winners was Spur, who was purchased after a solid racing career by James Butler to stand at his farm in Westchester where he sired Sting, who won the Met Mile and Suburban, two-thirds of the then handicap Triple Crown, but broke down in the third jewel, the Brooklyn. Sent to Butler's Eastview Stud, Sting got one good runner, Questionnaire, who transformed and became the ultimate savior of the Alarm line.

Questionnaire was a big, rangy, somewhat long horse with a slight dip in his back whose pedigree was fascinating but whose racing aptitudes belied that genetic make-up. He was from Himyar's sire line through Plaudit and his dam was by Disguise, a quality racehorse but only moderate stallion son of Himyar's son Domino. Questionnaire had a very modest juvenile campaign, but came to hand suddenly at three and went on to become a solid handicapper, impressive enough that the Whitney family purchased him to stand at their Greentree Stud in Kentucky.

Questionnaire went on to sire the very good handicapper and nice sire Requested, but his best son was Free for All, who according to Abraham Hewitt in Sire Lines, though only 15 hands, resembled his sire in scope and also had that dip in his back. Free for All was a pricey yearling (for the time) and went on to win six of his seven starts, was co-highweight on the Experimental Handicap, and was a favorite for the Kentucky Derby before breaking down in the Derby Trial.

Free for All continued the one-hit reputation of his sire line at stud by getting only one decent runner out of his nine stakes winners. That was Rough'n Tumble, who was a bit more coupled than his sire but also looked to possess one of the biomechanical components that would come to be a hallmark of his line-a long rear cannon. When combined with a balance of height and body lengths and strong quarters, this body part can generate exceptional kick, which Rough'n Tumble had during a career that included a win in the Santa Anita Derby and a mile track record.

Shuttled between the O'Farrell family's farms in Maryland and Florida for his first couple of years at stud, Rough'n Tumble eventually settled down in the Sunshine State to become a very successful sire. There he got, among others, a world record setter for the mile who also had a long rear cannon, a beast named Dr. Fager, as well as Minnesota Mac, who had an admirable closing kick on the weeds. The latter went on to be a decent sire, but ironically, kept the line going through a son who excelled on the dirt and whose dam was Ta Wee, an explosively speedy half-sister to the aforementioned Dr. Fager. This was Great Above, another substantial individual who did well as a sire, but when his son Holy Bull came along, attention was more closely paid.

There is no real need to detail the always colorful, sometimes controversial, racing career of this large, well balanced, very powerful gray battleship of a horse. What is noteworthy, however, is like so many others in his sire-line, he was somewhat underestimated at stud despite getting a Kentucky Derby winner (Giacomo, now at stud in Oregon) and an Eclipse winning 2-year-old in Macho Uno.

Macho Uno has been a nice sire on his own who came up with Mucho Macho Man, a Kentucky Derby third who went on to be a splendid older horse, winning the GI Breeders' Cup Classic as a 5-year-old. His first crop includes the winner of North America's richest winter race, the Pegasus.

Holy Bull, Macho Uno, and Mucho Macho Man resemble each other biomechanically in several ways, which brings phenotypical consistency to a genotypical band of brothers that owes its origins to the great immigration drive of the 19th Century.

Indeed, in the Irish households of those times down even until today, the last word in the euphemism “isn't life grand” could be substituted for the third word in the current political acronym without having to worry about the correctness of using it to describe a particular sense of pride in a sire line of our own.