Body and Soul: The Legacy Continues 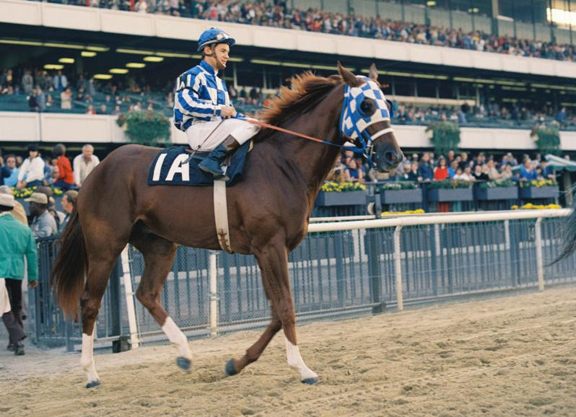 It was just about this time 30 years ago that the breeding and racing world began to change in a way few saw coming and many others took a while to comprehend. That was when the first foals by Gone West and Storm Cat started to hit the ground, mostly in Kentucky.

No disrespect to Storm Cat intended, but our purpose herein is to dwell on Gone West for reasons we hope will become clear as we keyboard onward.

No doubt there were huzzahs and hallelujahs from breeders, as well as the managers at Mill Ridge Farm where Gone West stood his entire career, but that was to be expected. There was also a great deal of interest on the part of the majority of the breeding world because Gone West was one of the first members of that extraordinary foal crop of 1984 to retire to stud–and many looked at the “1984s” as having the potential to reshape the breed as had the cadre of members of the foal crop of 30 years prior. That 1954 bunch included the lasting influences Bold Ruler, Round Table, Nearctic, and Crepello, among others.

The 1984 crop included the likes of champions Alysheba and Capote, Gulch, Cryptoclearance, Bet Twice, Java Gold, Lost Code, Seattle Dancer, Afleet, Slew City Slew, Demons Begone, Polish Navy, Leo Castelli, Mining, Trempolino, and Ascot Knight–most of which entered stud with high hopes. Backed by strong syndicates and books of very good mares, several of them went on to be very good sires–headed by Gulch, Capote, Lost Code, Cryptoclearance and Ascot Knight, but except for Gulch and Cryptoclearance none left a son to influence another generation.

(Storm Cat was a year older and came from a crop that included several outstanding racehorses, but save for himself, the most influential multigenerational sires had the best success overseas, e.g., Green Desert and Southern Halo.)

Gone West's looks and demeanor demanded attention and respect, and he got it in spades. Your correspondent had an up-front view of Gone West's racing career because a homebred we syndicated named Omar Khayyam was not only a member of that crop but also was stabled in the barn across from Gone West–he finished fourth when Leo Castelli beat Gone West in the GIII Colin S. as syndicate members' jaws dropped.

However, that Gone West would go on to be the star of the crop at stud was a bit of an eye-opener to many observers for a couple of reasons. First, though he was a very good racehorse and was trained by the impeccable Woody Stevens, Gone West could not quite be pinned down–he was neither fish nor fowl. Though he won the nine-furlong GI Dwyer S. by more than a dozen lengths, he came up short in every other stakes race beyond a mile. That satisfied the crowd that still doubted his sire, Mr. Prospector, was anything other than a speed sire and therefore limited in scope.

Then there was his pedigree. Though his female family was exquisite–the Persian Maid branch of the Aloe family which included the brilliant Tentam (the Knight's Daughter branch produced Round Table)–it was his broodmare sire that brought some up short.

“Excuse us?” you might say. “That would be Secretariat, you know.” Yes, we know, but we also know that in the mid-1980s Secretariat had already been judged as somewhat of a disappointment to some buffs as a racehorse sire, though he'd also not had time to establish himself as a broodmare sire. That subsequent achievement let him into an exclusive club with the likes of Chaucer, St. Simon, Son-in-Law and Princequillo, among others, and eventually as a chef-de-race.

Indeed, the same arched eyebrow reaction was also applied to Storm Cat, whose racing career was much more modest due in part to injuries. His sire, Storm Bird, had little to show in terms of domestic fireworks until Summer Squall won the GI Preakness S. in 1990. And even though one could not heap anything but praise on his brilliantly fast dam Terlingua, her family was not as rich and deep as that of Gone West. But she, too, was by that guy Secretariat.

Five years later, A.P. Indy came along, and the world according to Secretariat had become gospel.

By then, your correspondent's recommendation to the Werk Chefs-de-Race panel that because of his ability to “mix and moderate” Secretariat should be named an Intermediate-Professional chef-de-race had been approved.

In a physical sense, a clue to Secretariat's influence is presented on the accompanying Phenotype Target where his positioning (blue dot, second ring from the center, overlapping a purple dot, which is A.P. Indy) shows how this influence came into play. Seattle Slew and Mr. Prospector are in purple and green, respectively, in the center, and Storm Bird is in red overlapping the green dot, which is Gone West. Storm Cat (as one may have imagined) is the red dot in the Power sector, a hint into how he established himself and his offspring as phenotypical and genetic pioneers. Keep that point in mind. 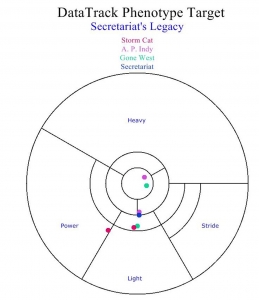 But we digress. Our focus, as we mentioned, is Gone West, and the reason is relatively simple. If we follow the careers of these three exceptional sires and look at what has become of their individual legacies, we see that all three of them got off to fast starts as sires and sires-of-sires, but today Storm Cat and A.P. Indy are better represented in numbers on both the leading sires lists and the four upcoming Freshmen Sire crops to assure that they will continue to have great influence over the breed, at least domestically, into the next decade

Storm Cat is well represented by his sons Giant's Causeway and his brother Freud, Harlan (Into Mischief), Hennessy (Scat Daddy, Henny Hughes) and Forestry (Shackleford), among others. A.P. Indy has a host of sons other than Pulpit (Tapit, California Chrome), including Malibu Moon, Bernardini, brothers Flatter and Congrats, Mineshaft, and Friesan Fire, with Honor Code likely to help.

Gone West, while having sent out such good racehorses and sires as Grand Slam, Mr. Greeley, Proud Citizen, and Zamindar, has only Elusive Quality poised to carry on the line (through Quality Road) until recently. That's because Speightstown's sons have entered the fray, and he has done it in the past two years with a flurry that may just be starting to pay off. The trend may be somewhat hidden because his gene pool was concentrated in Kentucky, where Munnings has turned out to be a very dependable and versatile sire with 7% black-type winners from foals, and where Speightster and Tamarkuz are waiting on reception to their first foals, which are now yearlings.

Aside from these, Speightstown's genetic pool has been widely scattered, and that could be a key point for future noise. Jersey Town (in Kentucky and now California) has done some good. Poseidon's Warrior has been deemed worthy enough to have moved to Kentucky this year from Florida. A key could be New York where four of his sons, including the leading New York first-year and juvenile sire Central Banker, have been joined by Golden Ticket, Weekend Hideaway, and Redesdale. Pennsylvania has Lord Shanakill and Eastwood, while Canada has Passion for Action.

It's also interesting to note that if we had placed Speightstown on that Phenotype Target, he would have wound up overlapping the Storm Cat dot. As the industry has come to accept over the past half-century, Power can be somewhat transcendent.

Thus, it appears that Gone West's influence through Speightstown may be just beginning, which means he will be one more spoke in a wheel of legacy established by a Big Red Machine whose 50th birthday will be coming up next year. Pop the corks, please!