It's one thing when a stallion comes along with some really nice horses in his first couple of crops, but it's a whole 'nother smoke when the next three crops come along and he hasn't sustained the drive, so to speak. At that point the market usually determines he was just into mischief in the sandbox and won't be able to make mayhem in the whole schoolyard.

In the case at hand, however, we have a horse actually named Into Mischief (Harlan's Holiday), now well beyond kicking sand in his rivals' blinkers and on his way to writing a remarkable tale that has a basis in at least four different qualities ranging from pedigree to biomechanics.

As a racehorse, Into Mischief came along before his multi-year champion half-sister Beholder (Henny Hughes) and his GI Breeders' Cup Juvenile Turf winning half-brother Mendelssohn (Scat Daddy). Into Mischief was fast and consistent in Southern California, winning the GI Hollywood Futurity and the Listed Damascus S., while placing in three other stakes from a well-spaced career of only six starts.

It was that speed which was the strong suit he had going for him when he entered stud at Spendthrift in 2009 at a $12,500 fee because he really didn't have much of a commercial pedigree behind him at the time. His dam, Leslie's Lady, was a restricted stakes winner by a nice, but not leading, sire in Tricky Creek. The next two dams were by the very good Stop the Music and decent One for All, but the quality of the black type in the family was best represented by Roanoke, a Grade I winning half-brother to his third dam, One Last Bird–Roanoke became a very modest sire. Indeed, the family was a bit moribund until the Storm Cat line came along, first through Harlan's Holiday, sire of Into Mischief, then through Hennessy, paternal grandsire of Beholder and paternal great-grandsire of Mendelssohn.

In addition, up until then his sire, Harlan's Holiday, though gaining momentum as a leading sire, had not emerged as a potential sire-of-sires. Indeed, there was hardly any thought back then of him becoming as influential as he did until his untimely demise–after all, his own sire, Harlan (Storm Cat), also died early, while Harlan's other top-class son Menifee, was exported to Korea early in his stud career (see our previous column, March 7th, “USA! USA! USA!”). This was a line that was generally overlooked.

For all these reasons, it was hardly surprising that Into Mischief attracted a modest number of mares in his first four years at stud which resulted in foal crops of 42, 27, 37 and 37–a total of 143 foals, which was 18 fewer than the number of registered foals (161) in his fifth crop. By that time he'd churned out seven SWs from his first crop, including Canadian multi-champion Miss Mischief, GI Breeders' Cup Dirt Mile winner Goldencents, multiple Grade 2 winner Vyjack, who were followed in his next crop by GII Super Derby winner Vicar's in Trouble and Grade III winner Can the Man.

There have been 11 SWs thus far from that fifth crop of 2014, including multiple Grade I winner Practical Joke (who entered stud this year), who helped his sire to top the list of Juvenile Sires in 2016. The current 3-year-olds include Classics prospect Audible, winner of the Grade 2 Holy Bull.

You can look at his success from a pedigree perspective, but more interestingly are several findings our team has made in researching what characteristics he possessed that generated his speed and how he manages to “fit” so many mares besides the fact that the Storm Cat line seems to have worked pretty well with his family. 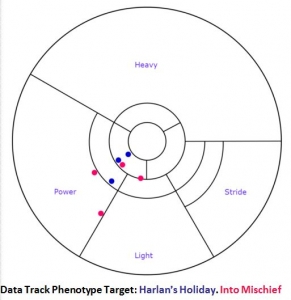 • Into Mischief is a bit of a biomechanical exception in the way he is structured to be a racing machine in that the length of his ilium–which is the bone that goes from the hip to the rear of the horse and forms an acute angle with the femur–is longer than his femur and tibia (the bone from the bottom of the femur to the hock). These three bones have a great deal to do with forward projection needed at the start and the kick that is needed at the end. If they are equal in size, power is generated evenly. If the ilium is longer than the other two, the power generated from the top is forwardly pronounced and leads to greater early speed–but sometimes at a risk of front end problems especially if the horse's front legs are a bit short or its body set in the front is low. But if the horse is gathered and allowed to stalk, it can generate explosive speed. This structure is inherited occasionally from what we have observed in others over the years. In time we will have a representative sampling of Into Mischief's offspring to determine if he is passing this component on, and how the ones who have the trait have performed.

• There is a striking similarity among Harlan's Holiday and Into Mischief and their sons at stud in Kentucky when it comes to Phenotype. The accompanying chart shows (in red) where Into Mischief and his sons Can the Man, Goldencents and Practical Joke fall on our Phenotype Target along with Harlan's Holiday and his other sons Majesticperfection and Shanghai Bobby (in blue). They are all Power-type horses, best adapted to display speed from sprints to middle distances. Except for one off to the left (still a Power type), these seven are pretty much the same Phenotype. As many observers have noted, offspring of Into Mischief, who resembles his sire to the eye, also seem to be uncannily similar (to the eye) to those of Harlan's Holiday. Maybe this helps explain it.

• In terms of size and scope (different than Phenotype, which is a physical expression of genotype) the following stallions pop up “clustered” among two or more of this line: Giant's Causeway, Notebook, Dixie Union, War Front, Wildcat Heir, Forest Wildcat, Scat Daddy, Bernardini and Mr. Greeley. In our experience this rarely happens within a sire-line or branch. (Could this give a hint as to which broodmare sires might work best with this line?)

Every once in a while a horse comes along whose name defines his aura as a racehorse and progenitor. The one in question has caused a serious amount of mischief thus far on the track and at stud for his competition–we would not be surprised if he turns that mischief into mayhem.