Body and Soul: Legacy of a Giant

There comes a time a bit after a major stallion passes that we can pull out all the objective analysis tools and assess his efficacy without worrying about being accused of shilling or pooh-poohing–and therefore somehow affecting how breeders might feel about sending a mare to him. (We can be catty sometimes in this game.)

Such is the case with Giant's Causeway, whose racing career was of such high class that it came as a bit of a surprise to some that he then went on to become such a successful stallion on four continents in both hemispheres. After all, the history of the sport is littered with dozens of brilliant racing legends who simply failed to leave any long-term imprint on the breed in any country.

This robust chestnut with a perfect name (by Storm Cat out of Mariah's Storm, by Rahy) took the racing world like the meteorological power which can be unleashed in that legendary Irish channel formed 60 million years ago from volcanic fury. Now we have an unusual situation where his sons may be about to surround us with progeny that will keep his name alive into the next Thoroughbred generation. It's unusual in the sense that he has been somewhat of a hidden gem among the sires-of-sires world and yet has his most potentially promising group of sons just starting to gain notice.

That Giant's Causeway succeeded at all as a racehorse and stallion demands a cursory look at his pedigree and a deeper look at his biomechanics–and there is a fascinating story in each part. We can blow right by the Storm Cat-on-Rahy cross (we'll get to it later in a physical sense) and point out that Mariah's Storm was only the second mare in four generations of her family to produce a graded stakes-winning colt (her dam, Immense, by Roberto, produced Group 2 winner Panoramic (GB) {Rainbow Quest}). Her second dam, Imsodear (Chieftain) and her third dam Ironically (Intent) were stakes-winning producers of stakes-winning fillies, and you had to go back to the fifth dam, Itsabet (*Heliopolis) to find any stakes-winning colts. Indeed, that dam was acquired in the late 1940s by Harry Isaacs, who developed the family and who named all his horses with a word beginning with “I.”

Past the pedigree, however, we have found a host of biomechanical facts that both confirm, and confound, what most breeders and stallion managers may think about Giant's Causeway and his clan. For example, his size: He was not a small horse if your only memory is the stretch run of the GI Breeders' Cup Classic in which the huge Tiznow edged him out. Indeed, Giant's Causeway was basically the same all-around size (height, length, heart girth, etc.) as Storm Cat, larger (of course) than Rahy, but generally smaller than his most successful racing and breeding sons. 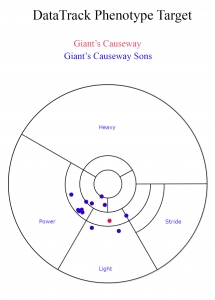 Secondly, Giant's Causeway was the most balanced of his tribe in terms of biomechanical measurements as detailed in the Phenotype Target which accompanies this article. Note that he (in red) is positioned midway between the Power and Stride sectors, while virtually all his sons are to the left (Power) side–where Storm Cat and Rahy both resided.

This positioning (which is the first factor we discover after measuring a horse) tells us that he is a balanced racing machine, but we need more to see if that will carry over into the breeding shed.

As far as his racing profile is concerned, it is very rare that a horse comes up with as many balanced factors as his–excellent mechanics, geometry, stride extension, square-off-the-ground at the elbow and flank, perfect ratio of back lengths to other lengths, very good thrust through the hocks and a solid rear combination of power and quickness through the hip: ilium, femur and tibia. This is not altogether rare in our experience, but he carried that imperceptible quality that many other horses with such “perfect profiles” never bring to the races: Enthusiasm and courage. This dude would not be beaten.

When it comes to assessing him and his sons as stallion prospects, we have several algorithmic steps to go through, one of which compares the horse in question in size and scope to leading sires which are also in our database. In that regard, he is quite close to Dixie Union, Tale of the Cat, Speightstown, and Awesome Again–all average-sized horses whose mechanics fit a wide cross-section of mares.

From there, however, things really change. First, except for perhaps First Samurai and Carpe Diem, you could look at his dozen or so major commercial sons and conclude that they really don't resemble him to the eye–much like that Phenotype Target. Many, in fact, seem to reflect their broodmare sires or Storm Cat himself.

When it comes to that size-and-scope thing, it's more fascinating. About half of them are large horses, resembling most often horses like Indian Charlie, Street Sense, Scat Daddy, Deputy Minister and Ghostzapper. A third of them resemble another group, smaller in size but powerful sires–Round Table, Lion Heart, Forest Wildcat, Wildcat Heir. That's quite a spread that might require breeders to look at these horses before deciding bookings.

That is likely to become crucial as his progeny, such as Brody's Cause, Carpe Diem, City Wolf, Not This Time and Protonico, come to market over the next several years. One clue we already have is Fed Biz, an atypical Giant's Causeway in race record (sprinter-miler) and appearance (looks nothing like him), who has come through the 2-year-old sales season as a talking horse based on how they run and the fact that virtually all of them resemble their sire–and not his daddy.

These things happen–just because it's a game which will fool you as much as make you look smart.