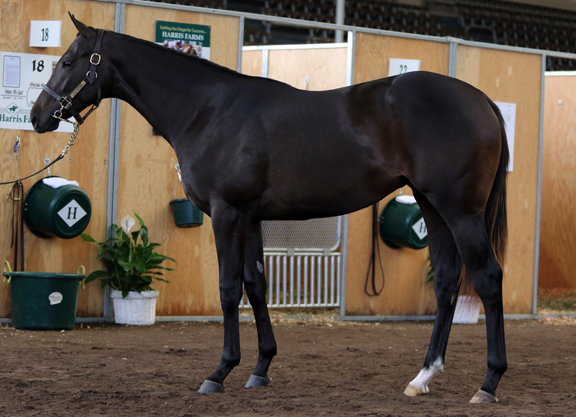 Trainer Brian Koriner, bidding on behalf of Siegel, signed the ticket at $300,000 on hip 78, a daughter of Bodemeister out of stakes winner North Freeway (Jump Start). Koriner trains the filly's 2-year-old half-brother Take the One O One (Acclamation), who will carry the Jay Em Ess colors postward in Sunday's Del Mar Juvenile Turf.

“We bought Take the One O One privately and we really like him,” Siegel said. “We heard the sister was in the sale and we heard she was very nice. Then we saw it for ourselves. Unfortunately everybody else saw it too.”

Siegel was prepared to find plenty of competition at the Barretts sale, which attracted a strong bench of pinhookers, as well as local owners and breeders, this year.

“Looking at the sales that have happened so far this year, every one has been up and it's been very difficult to buy a horse,” Siegel said. “I was out at the races Sunday and I saw all the pinhookers out there and I was like, 'You're kidding?' Brian said this filly was going to be hard to get and I said, 'OK, we'll take a big swing at her.”

The dark bay yearling was consigned by Harris Farms on behalf of breeder Tom Bachman.

“I expected she would bring something in the six figures, but I had no idea she would bring that kind of money,” Bachman said. “She is probably the nicest horse I've raised and I've been doing this a long time. Sometimes you get lucky–the Lord gives you a good one and you try not to screw it up.”

Bachman purchased North Freeway as a 5-year-old for $90,000 at the 2013 Fasig-Tipton Kentucky February sale.

“I'm a commercial breeder and I was looking to lower the average age of my mares,” Bachman said of North Freeway's appeal. “She was a mare who was just off the track who had shown that she could run. She's by a son of A.P. Indy and she's a big attractive mare–she was just what I was looking for.”

Take the One O One, the mare's second foal, sold for $47,000 at the 2016 Northern California sale. She produced a colt by Square Eddie this year and was bred back to Into Mischief and will likely return to California-based Acclamation in 2018.

“Because of the way the Cal-bred program is set up, you have to breed back to a horse back here in California,” Bachman said. “But it gets pretty thin when you take a mare who foals an Into Mischief and try to find a stallion to breed her back to here. Luckily, with her I'll go back to Acclamation, but I wish that people would step up and bring some nice stallions out here, maybe someone out east would send them out here in their fourth or fifth years, wait to see how they develop back there, and give us a shot at some of them out here. It's not easy and you have to be very aware when you are a commercial breeder here that you can't get financially too deep into a horse because you won't get out. It's good to see that people spend that kind of money out here and I think it will give people faith that they can sell a nice horse out here. Hopefully, it's a bit of a launching pad for people to sell better horses out here.”

Through Harris Farms, Bachman also sold a colt by Goldencents (hip 22) for $70,000–fifth highest at the auction. Five of the top 10 yearlings at the sale were sired by Kentucky-based sires.

“I have a really good group of babies on the ground right now and I think six or seven of them are Kentucky-sired Cal-breds,” Bachman said. “[This sale] gave me confidence that I can keep them out here and sell them here. The Cal-bred program is very attractive and if you have a Cal-bred that people perceive might make it in the open division, you're going to have people lined up to buy him.”

Blinkers on Racing Stable purchased the sale's top-priced colt (hip 67), going to $120,000 to secure a yearling from the first crop of GI Breeders' Cup Classic winner Mucho Macho Man. Consigned by McCarthy Bloodstock, agent, the yearling was bred by Richard Barton who purchased his dam Longing (City Zip) for $2,500 at the 2014 Keeneland November sale.