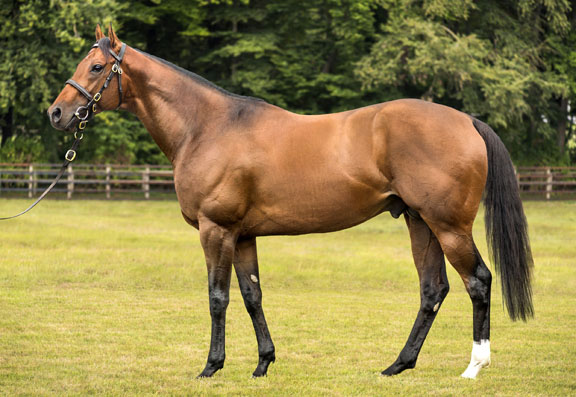 There was a time some decades ago when Britain and Ireland routinely looked to America for stallion prospects through the purchase of well-bred yearling colts. The subsequent dominance of Northern Dancer in Europe, primarily through his son Sadler's Wells, has meant that such trans-Atlantic shopping trips are no longer so in vogue.

While there's no shortage of Sadler's Wells' sons and grandsons at stud in this part of the world, an intriguing recent addition to the stallion ranks in Newmarket represents a diversification of the line which is thriving in America. The GI Breeders' Cup Turf Sprint winner Bobby's Kitten, a son of the champion turf horse and five-time US champion turf sire Kitten's Joy, arrived at Lanwades Stud earlier this autumn and has received a stream of visitors ahead of his covering debut next February. While his retirement was not announced until September, Lanwades principal Kirsten Rausing had been in negotiation with Bobby's Kitten's owner-breeders Ken and Sarah Ramsey since the spring.

His one run for Dermot Weld in Ireland since transferring from Chad Brown's stable resulted in a wide-margin victory, in heavy ground, in the Listed Cork S. over six furlongs. That win augmented his five successes in America, which include the GIII Pilgrim S. at Belmont as a juvenile and that Breeders' Cup triumph at the expense of No Nay Never (Scat Daddy) back in 2014.

“I had plenty of competition for Bobby's Kitten, particularly from Ireland,” admits Rausing. “He is the first son of Kitten's Joy to stand in Europe and it's exciting to have him here. He is certainly creating some interest.”

The 5-year-old's arrival has also been something of a fillip in a sad year for Lanwades Stud, which lost Aussie Rules (Danehill) to an internal melanoma and Leroidesanimaux (Brz) (Candy Stripes) in a paddock accident just a few months later.

“It was a real bereavement,” Rausing recalls. “I've been in the stallion business for 45 years and I had never lost a stallion unexpectedly or during the breeding season, and this year I lost two. The statistics are unfortunately catching up with me. Gosh it was tough, not just for me but for everyone here, particularly the lads. We were all walking around like zombies.”

That sadness has now given way to the renewed hope that a new name to the roster brings any stallion farm, and early indications are that Bobby's Kitten–who, like Frankel (GB), was named in honour of the late Bobby Frankel–will not lack support as he settles in to his new home just outside Newmarket alongside Sea the Moon (Ger), Sir Percy (GB) and Archipenko.

Rausing confirms that Ken and Sarah Ramsey have already placed 10 mares, all in foal to Kitten's Joy, in quarantine in America in order to travel to England to visit their homebred next year.

She adds, “One would assume that those mares will go back to America, so we will have some representation there, too. And there has been strong interest from leading European breeders in England, Ireland, France and Germany. He's a horse who will suit a lot of mares, especially the smaller, butty sprinting mares, especially from the Green Desert line and indeed Danehill.”

Bobby's Kitten's arrival in Ireland last year goes some way to completing the circle that began when his grandsire El Prado (Ire) (Sadler's Wells), a bedrock of the Adena Springs operation, was sold to Frank Stronach by his late owner Robert Sangster back in the early 1990s. Despite being a Group 1 winner and champion juvenile in Ireland, the grey's turf roots were a hard sell to American breeders in his early years at stud, but El Prado, who died in 2009, now has a significant legacy in his adopted country. That has been established chiefly through his stallion sons Medaglia d'Oro–whose G1 Golden Slipper-winning son Vancouver (Aus) joins the Coolmore roster this year–and Kitten's Joy, whose success in America was further enhanced when Hawkbill became his first Group 1 winner in Britain this year.

“I'm always looking for stallions–I never stop looking–but it becomes more and more difficult almost year by year because of the obvious dominance of a few major players,” says Rausing, who bought Lanwades Stud from Col. Nat Frieze in 1980 and set about establishing an eclectic roster. The first resident of her stallion yard was Niniski (Nijinsky), who, from a select first book which was tiny by today's standards, became the champion first-season sire of 1984.

She adds, “If I'm known for anything, I think it's for thinking outside the box, but perhaps I do it to such an extent that people don't understand it. With Leroidesanimaux and With Approval, people didn't understand them. Had 'Leroi' lived I think he would have eventually been understood here, but it would have taken until he was about 20. I'm so thrilled with the foals and yearlings he left behind. Losing him in a paddock accident was the hardest blow I've ever had in my life in the breeding industry. I think he will leave a significant heritage and I'm keeping all the fillies he gave me–I'm never going to sell a filly by him.”

Rausing, a staunch supporter of her stallions, will no doubt have admired from afar the approach of the Ramseys in their support of Kitten's Joy. Their rewards have been reaped on the track via such top-class gallopers as Big Blue Kitten, Admiral Kitten and GI Breeders' Cup Filly & Mare Turf winner Stephanie's Kitten. Kitten's Joy's record at the Breeders' Cup Thoroughbred World Championships was further enhanced this year by Amerman Racing Stables' GI Breeders' Cup Juvenile Turf winner Oscar Performance and, while Bobby's Kitten's brother, the dual Grade II winner Camelot Kitten, missed his intended appearance at Santa Anita, he remains in training for next season.

Their dam Celestial Woods (Forestry) has clicked well with Kitten's Joy, producing four multiple winners by him, and her family offers plenty of encouragement for European breeders, with her grandam North Of Eden being a Northfields half-sister to another influential turf sire and Breeders' Cup winner, Theatrical (Ire) (Nureyev).

“I try to cater to a range of mare-owners and indeed mares,” explains Rausing of her decision to secure Bobby's Kitten. “Being a relatively small operation standing four or five stallions I have to offer breeders something they can't find elsewhere. I was very fortunate to have Hernando and Selkirk, and Leroidesanoimaux is sadly missed. Nowadays when I look through the stallion register in Europe it is so permeated with Galileo and Danehill, and as great a combination as it seems to be, you can't keep going forever. Although Bobby's Kitten of course comes from the Sadler's Wells sireline it is, one would hope, sufficiently distant and it's another branch through El Prado and Kitten's Joy. I think it's rather complementary rather than just being the same thing again.”

With 13 members of Sea the Moon's first crop selling this week at Tattersalls for an average of 44,231gns and top price of 160,000gns, and with the imposing Bobby's Kitten becoming an appealing addition to the team, there's plenty of cause for joy at Lanwades.