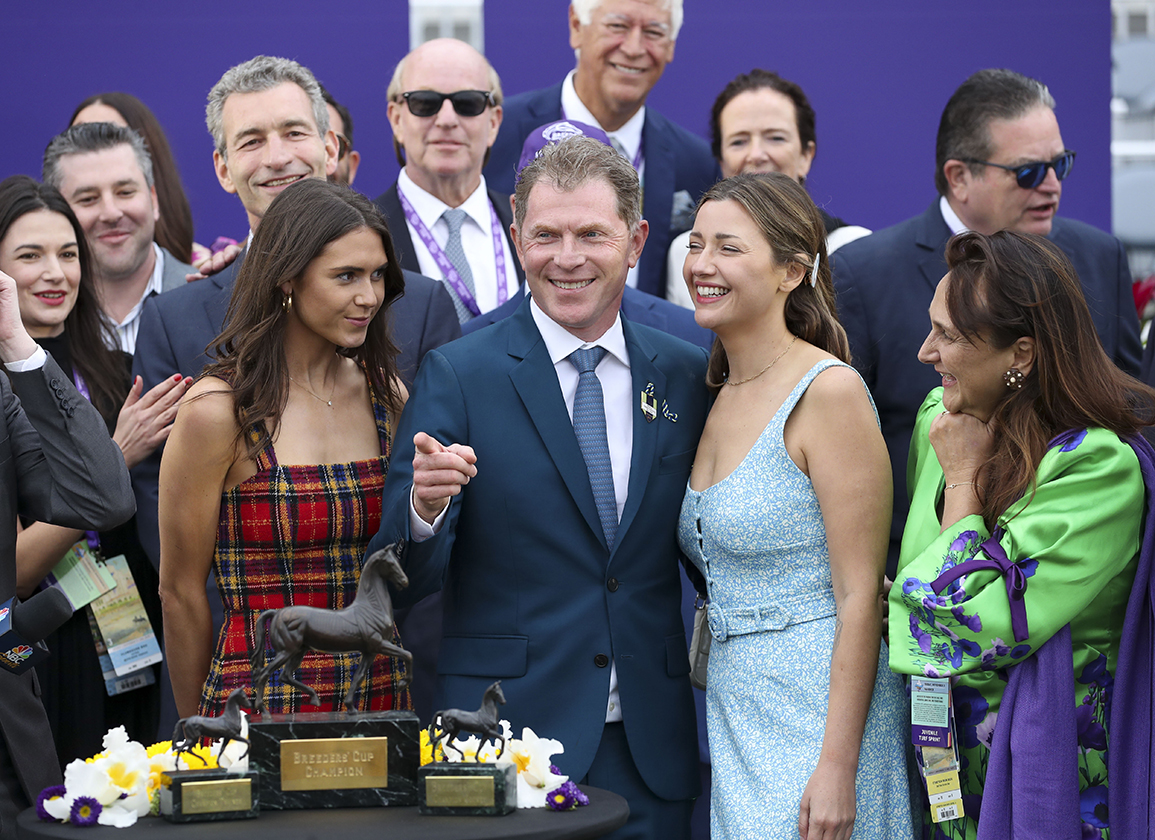 Still riding high from a scintillating victory in the GI Breeders' Cup Juvenile Fillies Turf with fast-finishing Pizza Bianca (Fastnet Rock {Aus}), celebrity chef, restaurateur and owner/breeder Bobby Flay joined the TDN Writers' Room presented by Keeneland Tuesday afternoon. Calling in via Zoom as the Green Group Guest of the Week, Flay appreciated the significance of winning on racing's biggest stage with a homebred, teased a potential Royal Ascot trip with Pizza Bianca and discussed how he would approach racing's marketing challenges and more.

Flay made a huge splash at the 2014 Tattersalls October Sale when going to 1,250,000 guineas (around $2,122,050 U.S.) to purchase a regally-bred daughter of Galileo (Ire)–the highest-priced filly sold in the Northern Hemisphere that year–he named White Hot (Ire). But the filly never made it to the races. Flay could've cut his losses and sold the mare back at auction, but instead held onto her to breed, putting trust in her pedigree, and she rewarded him with a Breeders' Cup winner as her first foal.

“She has a lights-out pedigree,” he said. “She's by Galileo, she's a half to Pour Moi (Montjeu {Ire}), who won the English Derby, and that's just the beginning of the pedigree. It goes on for pages. It's a Coolmore family. And one thing about buying into a Coolmore family, those guys are so focused on making their families better and better that they're going to spend money all over that pedigree until the end of time. So I made that bet. I took a leap of faith and it didn't work out. The horse never ran, just wasn't good enough. But I knew I was going to keep this horse for the rest of her life. My feeling was, at some point, the blood will show up. If it's that good, something has to happen, directly or indirectly, that's going to help your family. But you have to be patient. You may have to invest more money actually to continue to breed, but at some point it will work. And I obviously did not expect it to work with the first foal, but it did. It's all gravy from here on out.”

Flay has become a breakthrough celebrity and, as a result, a de facto ambassador of racing. He was asked about how receptive people in his world are to the sport and what can be done to introduce more potential owners and bettors into the game.

“There's only one way to do it. You have to expose them to it,” he said. “If you ask me for a recipe and I just hand you a piece of paper or tell you to go download something off a website and you make it, it's going to be one way. But if I actually show you how to do it, it's going to come out differently and probably better, because I'm showing you as opposed to telling you. It's the same thing for racing. If I tell people about my experience, they're like, 'Oh yeah, that's great.' I take people to the big events, because I want them to see racing at its best, see the best horses and the biggest crowds, and then they're hooked. They're like, 'I can't believe I've never done this before.' I hear that all the time. Every year, I take about 25-30 people to the Belmont Stakes. Half of them have never been to a race before. They become racing fans.”

Elsewhere on the show, which is also sponsored by Coolmore, West Point Thoroughbreds, XBTV, Lane's End and Legacy Bloodstock, the writers discussed their takeaways from last week's interview with Travis Tygart and Tessa Muir of USADA, debated whether or not Lasix-free racing is a big deal anymore and addressed potential remedies for the wagering public in situations like the Breeders' Cup Juvenile Turf mess. Click here to watch the podcast; click here for the audio-only version or find it on Apple Podcasts or Spotify.