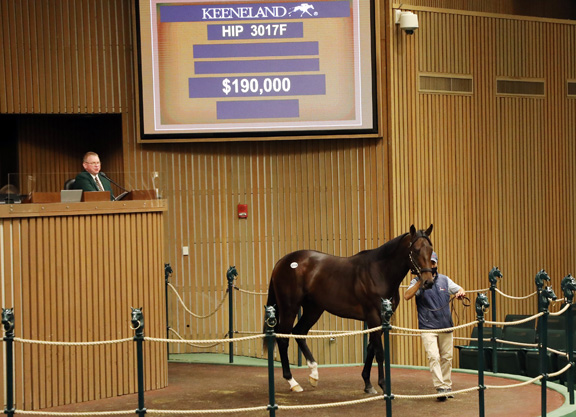 A pair of racehorse prospects offered by St. George Sales late in the day were the lone lots to bring six figures during Monday's session of the Keeneland November sale, with graded-stakes placed Bob and Jackie (Twirling Candy) (hip 3017F) bringing top price of $190,000 when selling to bloodstock agents Grey Price and Mike Recio on behalf of California owner Calvin Nguyen. Bred and raced by Zayat Stables, the 4-year-old is a three-time stakes winner and recently finished third in the Oct. 3 GII City of Hope Mile S. Bob and Jackie was supplemented to the auction and, following his quick trip to the Bluegrass, will be shipping back to the Southern California barn of trainer Richard Baltas.

“He just ran a great race in that Grade II recently and he should get better with age,” Recio said of the colt's appeal. “He's had a little bit of an interrupted campaign, but he's doing great right now. Rich really loves the horse and wanted to get him back. He thinks he has a big future and Calvin is a longtime client of his.”

Recio continued, “The horse showed a lot of class. He vanned out here and he didn't get here until seven this morning. There were a lot of hoops to jump through to get him here. He showed like a champ and did his thing. And now it's time to go home and keep on going.”

Also supplemented to the sale, Alex Joon (Flatter) (hip 3017E) sold for $120,000 to Donald Strickand. A $250,000 Keeneland September buy in 2018, the dark bay colt won once in four starts for Zayat Stables and trainer Steve Asmussen. He was most recently runner-up in a Churchill Downs allowance Oct. 29.

“I think the market has been very fair,” Recio, who sells under the South Point Sales Agency banner, said. “We are very blessed that we are having sales at all. The quality has not dropped at all in price–whatever is termed quality. I think we are in a revolving door, same old same old right now. I think some people need to lighten their load broodmare-wise. Hopefully stud fees can remain neutral for a couple of years. This is a cycle and I think the market was due a dip regardless of COVID. Owners not being able to attend races and enjoy themselves probably has a little bit of an effect. And I think a lot of people are cleaning house. It's not like any other dip we've had in the market. Until we can get travel back so we can get some more international flavor for the lower to middle market and even have some lighter restrictions in the U.S., I think we're in for a hard time. I don't think it's going to go away right away.”

Four Star Sales purchased the highest-priced mare during Monday's session of the November sale, going to $85,000 to secure the 5-year-old Convinced (Tiznow) (hip 2961). Out of an unraced sister to Tapit, the also unraced mare is in foal to Maclean's Music and was consigned by Vinery Sales. A filly by Free Drop Billy, also consigned by Vinery Sales, was the session's top-priced foal when selling for $72,000 to Spendthrift Farm, which stands her Grade I-winning first-crop sire. The weanling (hip 2656) is out of Help the Children (Stormy Atlantic).

The Keeneland November sale continues through Wednesday with sessions beginning each day at 10 a.m.