Blue Diamond Team Hoping For A Knight To Remember 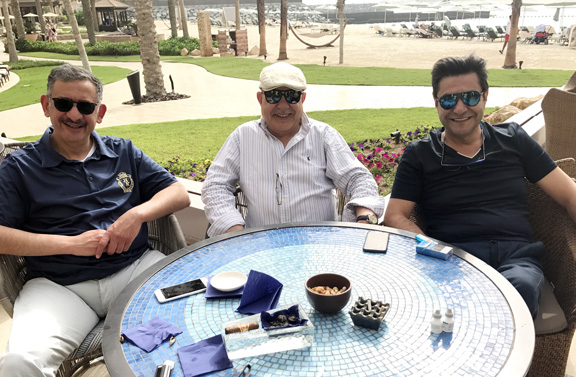 Given adequate financial backing, the pursuit of breeding the best to the best should be easy. But for every occasion that this has been a roaring success, there have been so many more examples of well-bred failures. After all, the second part of the saying requires one simply to hope for the best, and with hope, every breeder also requires luck.

Having bought Pearling (Storm Cat), a sister to Giant's Causeway and You'resothrilling, for 1.3 million guineas and sent her to Galileo (Ire), the team of Saleh Al Homaizi and Imad Al Sagar gave their fledgling breeding operation at Blue Diamond Stud the best possible chance of making its name on the world stage.

Just over five years ago, Pearling delivered her first foal, a colt, and he was followed by another colt by Dubawi (Ire), then a filly from the first crop of Frankel (GB). So far, so good. But disaster was to strike when the farm lost Pearling's 2015 Dansili (GB) colt as a yearling in a paddock accident, while the following year the mare produced a dead colt by Galileo. So, by the time her first foal, now named Decorated Knight (GB), became a Group 1 winner in the Jebel Hatta on Super Saturday, it was as much a feeling of compensation and relief as one of delight. The Roger Charlton-trained 5-year-old is now aiming to build on that top-level win with a further triumph in today's G1 Dubai Turf.

“Of course having a Group 1 winner is what every breeder dreams of and especially for the age of our breeding operation – it's not been so long that we have owned the stud,” says Saleh Al Homaizi, who began owning horses in his native Kuwait 20 years ago, always in partnership with his friend and countryman Imad Al Sagar, before spreading his wings to Britain.

The duo has been well advised on the racing and breeding front by manager Tony Nerses, who aided them to strike at the highest level early in their British ownership days, first with Irish 2,000 Guineas winner Araafa (Ire) (Mull Of Kintyre {Ire}) and then the following year, even more gratifyingly, with Derby winner Authorized (Ire) (Montjeu {Ire}). While both Classic winners were sold to stand at stud, the partners have more recently retained ownership of Group 2 winner Sayif (Ire) (Kheleyf), who stands at Llety Farms, and have this season retired homebred G2 Gimcrack S. winner Ajaya (GB) (Invincible Spirit {Ire}) to Rathbarry Stud. While not currently standing stallions themselves, they have however bought two farms on the outskirts of Newmarket at which to base their breeding operation.

Al Homaizi explains, “After the early success we had with Araafa and Authorized and many others, we felt that the best way to go forward and to be able to get the best bloodlines was to breed our own, because long term that potentially gives you a better chance of getting Group horses, and that's what happened with Ajaya––we bought his dam in foal, carrying him. The sales are very tough and getting tougher––you have to pay so much money for the better pedigrees.”

Instead of continuing to invest solely in yearlings, the pair opted instead to make a significant play for some decent broodmares.

“I remember when we bought Pearling, Tony was at the sale and he rang me to say this is the only mare we should buy. It was good advice,” says Al Homaizi with a smile. “We paid a lot of money for Pearling of course but now she's worth so much more.”

What the 11-year-old mare has given her two owners cannot be measured solely in bloodstock valuations, however.

Speaking from his hotel in Dubai two days ahead of the biggest meeting in the UAE, Al Homaizi, who has made the short trip from his home country, says, “It's a really proud moment for us to have a runner at the Dubai World Cup meeting. It's a real sense of achievement and satisfaction. Maybe it doesn't have the same history as Royal Ascot but it is still a very young meeting and it is now very important, with more than 80% of the guests who will be attending coming from outside Dubai.”

As our discussion is taking place, Imad Al Sagar arrives at the hotel and immediately admits that he is very nervous ahead of the big night.

“I don't just get nervous on race day, the nerves start for me now,” he says.

The friends have been champion owners in Kuwait but after a break in having horses in their homeland have recently reinvested in a runner in the country, where Al Homaizi has recently been put in charge of racing.

“It was Saleh who got me into racing,” recalls Al Sagar. “He has loved horses all his life and we've been friends for a long time so he pulled me along with him.”

With Decorated Knight set to return to Roger Charlton's Beckhampton stable next week ahead of a European summer campaign which could potentially include appearances in the G1 Tattersalls Gold Cup, G1 Prince Of Wales's S., or G1 Coral-Eclipse S., the team is also looking forward to seeing his 3-year-old sister Ambrosia (GB) continue her racing career under the guidance of Roger Varian.

“She is by Frankel and she ran only twice last year so we hope she will be a good filly this year,” says Al Homaizi.

Meanwhile, Pearling is set to produce a brother or sister to Decorated Knight in the coming weeks, a foal whose arrival will certainly be the most eagerly awaited among the Blue Diamond Stud newcomers. The farm's broodmare band currently numbers 57 but is likely to be reduced in the coming years.

“Saleh is keen to cut down to 35 mares and I agree with him,” explains Nerses. “We currently board some mares at other studs but it would be nice to scale down slightly. The problem is we also have stallions to support so we can't cut back too much––we're sending 18 to 20 mares to Ajaya at Rathbarry Stud.”

With Decorated Knight being very closely related to the 2,000 Guineas winner Gleneagles (Ire) (Galileo {Ire}) and a Group 1 winner himself, he has every right to be considered as the partnership's next stallion prospect, not that they have any immediate desire to stand a stallion at Blue Diamond.

“Right now I don't think we are equipped to stand our own stallion but it is a possibility for the future,” says Al Homaizi. “The studs which stand stallions are very specialised and well qualified after doing it for many years. At Rathbarry they know the industry very well and have a good client base.”

In the meantime, it is clear that the sporting owners are simply enjoying the prospect of what this year might bring for the horse who has already delivered one dream.

Al Homaizi adds, “We know Decorated Knight will have to improve again to win a very strong race but for us it is exciting to be here with a good chance in a Group 1 race at the Dubai World Cup meeting. We are just so proud of him.”