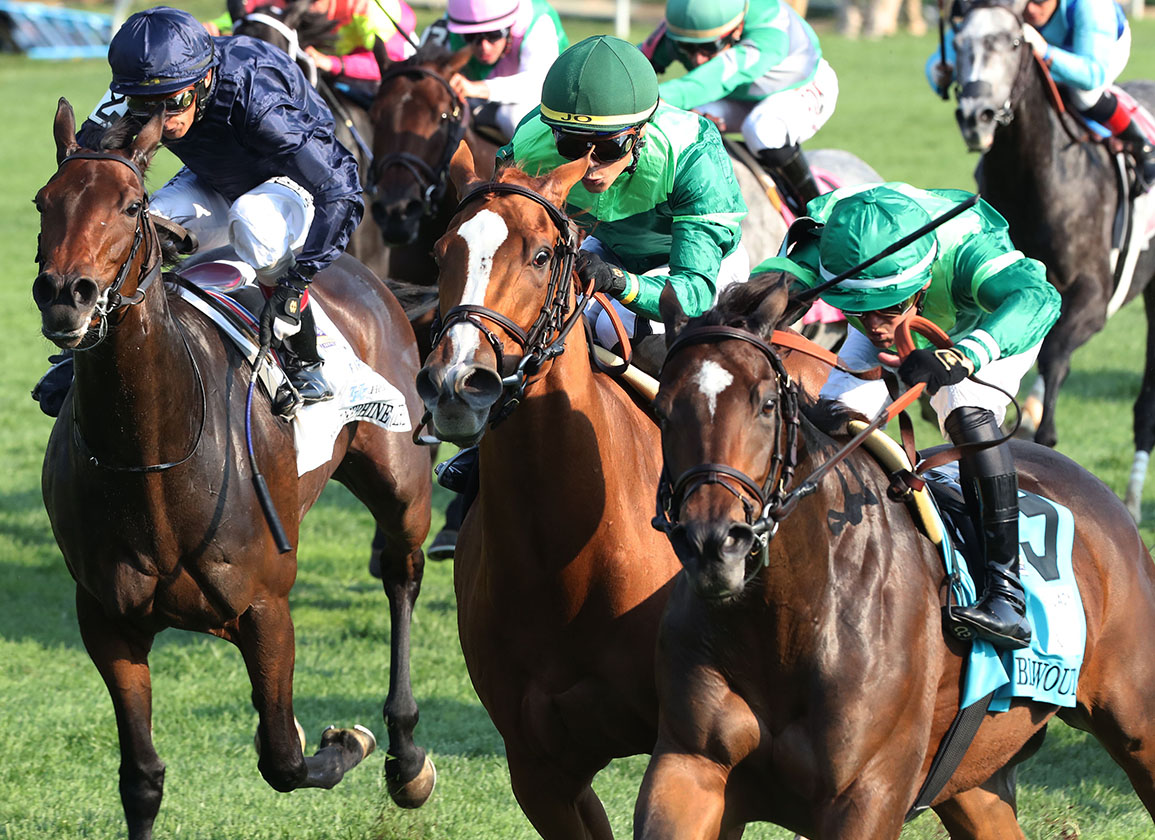 Blowout was kicked straight into the lead by Flavien Prat from an outside alley and established a clear lead through the first two panels in a manageable :23.76 and a half in :47.75, chased most closely through the opening exchanges by La Signare (Fr) (Siyouni {Fr}) and Regal Glory, who traveled three wide the trip without the benefit of cover. Traveling nicely on the bridle nearing the stretch, Blowout was confidently ridden past the eighth pole and, although Regal Glory tried her very best, she could not press past and Blowout was home narrowly in front. Empress Josephine sat a ground-saving trip better than midfield, was pulled off the inside and rallied three wide into the stretch and ran on to be a highly creditable third. Favored Althiqa (GB) (Dark Angel {Ire}), winner of the GI Just A Game S. and GI Diana S. in her two most recent starts, raced in the slipstream of Empress Josephine down the back, but endured a checkered passage through the final furlong and a half and did well to be fourth.

“As usual she showed a lot of speed out of the gate, and I was able to get myself comfortable on the lead where I didn't have too much pressure,” said Prat of the winner. “She relaxed well down the backside. She fought really hard down the lane because she lost the lead for a little bit, but she dug in and fought back and really made a great stretch run.”

Blowout was one of the more luckless horses in training in 2020, losing a third-level Saratoga allowance by a neck last August, the GIII Noble Damsel S. to stable companion Viadera (GB) (Bated Breath {GB}) by a similar margin the following month and missing by a nose to the latter in the GI Matriarch S. in November. The bay held on to win the GII Distaff Turf Mile May 1 at Churchill after opening up by as many as eight lengths and was a latest fourth to Got Stormy (Get Stormy) after cutting out a strong pace in the GI Fourstardave H. Aug. 14 at the Spa.

Blowout is the 23rd top-level scorer for her sire and is the second GISW out of a daughter of the late Deep Impact (Jpn). The other, the striking 7-year-old Kiseki (Jpn) (Rulership {Jpn}), was to run in Sunday's G2 Kyoto Daishoten at Hanshin.

In the name of Whitebirch, Brant paid €450,000 for Blowout at the 2016 Goffs November Sale. She is the second foal from her dam, who carried the Wildenstein silks to a popular victory in the 2012 G1 Poule d'Essai des Pouliches (French 1000 Guineas) ahead of a close runner-up effort in that year's G1 Prix de Diane (French Oaks). Beauty Parlour, a daughter of SW & MGSP Bastet, is a full-sister to Barocci (Jpn), a stakes winner and Group 3-placed in France and placed in the GII City of Hope Mile and GII American H. in this country for Hronis Racing and John Sadler.

Beauty Parlour is the dam of the 2-year-old filly Bouffant (Ire) (Galileo {Ire}) and a yearling filly by the late Coolmore legend.