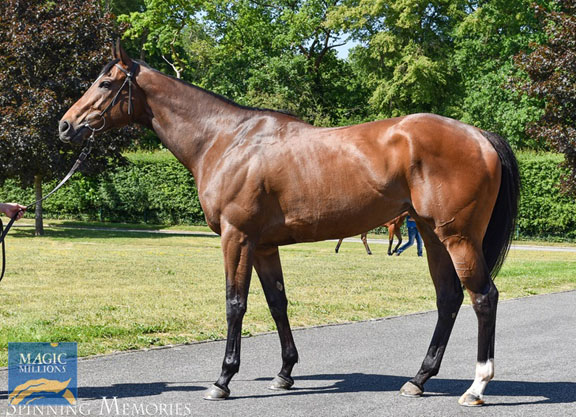 Spinning Memories will be sold online next week by Magic Millions

Borders may be closed around the world but the resourcefulness of the bloodstock industry has meant that horse sales have continued to be staged, even if not all the horses catalogued can actually be present in the ring.

When Spinning Memories (Ire) (Arcano {Ire}) lines up for the G3 Prix du Palais Royal on Thursday it will be the start of quite an international week for the mare, though she will only travel between her stable in Chantilly and the racecourse at Clairefontaine. Five days later, the 5-year-old sprinter will come under the virtual hammer as the final lot of the Magic Millions Online Sale in Australia, which is being held from June 2 to 4.

Offered by owner Pan Sutong, whose Goldin Farm is also selling 33 broodmares and weanlings during the auction, Spinning Memories will feature as lot 131. Trained by Pascal Bary, she earned her first chunk of black type when winning a listed race on only her third start at three, followed by another listed victory at ParisLongchamp on her 4-year-old debut. Since then, Spinning Memories has remained in good company and won the G3 Prix du Meautry last season as well as finishing fourth in the G1 Prix Maurice de Gheest. She emerged from lockdown on May 11 to land the listed Prix Maurice Zilber, extending her record to four wins from 10 starts.

On Tuesday, Magic Millions staged a 93-strong online sale exclusively for Rosemont Stud, which grossed more than A$2.5 million and was memorably described by the stud's principal Anthony Mithen as being “like speed dating on steroids”. Now the sales company is gearing up for the next round of action beginning on Tuesday.

“We've had two sales in the last month as we also had one for Cornerstone Stud, but this is our first public sale which anyone can enter,” said Barry Bowditch, managing director of Magic Millions.

“Goldin Farm are having a reduction sale and that includes Spinning Memories. She's a mare who has a lot of upside in her racing career. To go with that she is already very well performed and I think a lot of the European and American breeding barns would already have eyes on her. She could potentially have a big campaign later in the season.”

Spinning Memories, bred by Mubarak Al Naemi, was the first foal for her unraced dam Hanalei Memories (Hard Spun), who is herself a grand-daughter of the multiple graded stakes winner Memories Of Silver (Silver Hawk) and out of a half-sister to dual Grade 1 winner Winter Memories (El Prado).

Bowditch continued, “It's amazing how small the world is when you're sitting in Australia and all of a sudden you're offering a mare in training in France who is running in a Group 3 race. It's something that is obviously quite new to us but we are really excited by the idea of promoting her and really looking forward to watching her race. The way our world works now, with the information and the technology, you can get it all at the click of a button and it makes horses accessible to buy anywhere in the world at any time.”

He added, “We are lucky here in Australia that racing has been able to continue and participants have been able to earn money on the racetrack and keep the horses racing, so with that it has given sales companies an opportunity to continue selling horses and there is still confidence in our industry.”

A mare from a strong American family, bred in Ireland by a Qatari, trained in France for a Hong Kong-based owner, being offered at a virtual sale in Australia. Welcome to the brave new world of bloodstock auctions.