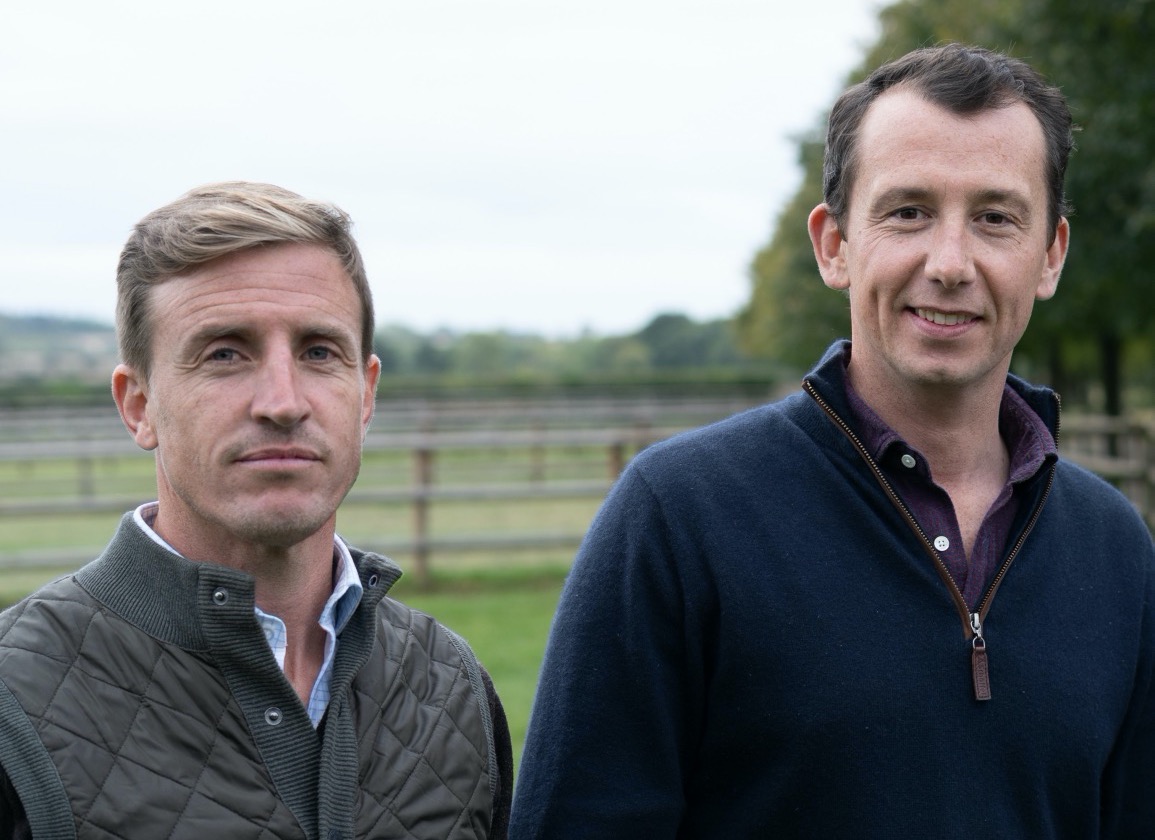 Will Kinsey and Ross Alberto, founders of ThoroughBid

ThoroughBid is the new kid on the block in the bloodstock auction world, offering Britain's first online-only platform for buying and selling everything from horses in training and broodmares to shares in syndicates and stallion nominations.

“It's evolution rather than revolution,” says the company's co-founder Ross Alberto, a racehorse owner who runs a commercial property and farming business in Gloucestershire.

Alberto launched ThoroughBid last week in partnership with Will Kinsey, the former amateur rider and trainer whose many roles in the bloodstock business include breeder, syndicator, agent and sales consignor.

Alberto and Kinsey have already combined successfully through their Future Bloodstock banner in the purchase of Stormy Ireland (Fr) (Motivator {GB}), winner of the G1 Mares' Champion Hurdle at the Punchestown Festival in May for their FB Racing Club, which offers micro shares.

They spoke with Emma Berry about their plans for involvement in the digital bloodstock sales market, which has recently seen a new world record set for an online auction when Funstar (Aus) (Adelaide {Ire}) was sold by Inglis for A$2.7 million.

TDN: The pandemic has really opened up the digital Thoroughbred sales market, and the established sales companies have either revamped or launched online bidding platforms. Is that good or bad for you as a company which had been planning this sales format since before March 2020?

Ross Alberto: Pre-pandemic, I got involved in owning racehorses alongside Will and I just remember the early days of buying the syndicate horses and going up to Goffs in Doncaster and thinking it was wonderful. I found it fascinating having loads of horses in one place but I found it equally confusing trying to pick your way through the catalogues and then see all the horses and remember them.

So I asked, “Is this really the only opportunity to transact?” Will said, “Well, look, there is [an] online [option] but no one really seems to do it over here.” I thought that had to be the way forward.

Then when Covid came along, and hearing Will's frustration as a breeder and a buyer and seller of horses, that's when we thought it would be a good idea and that if we didn't do it, someone else would. And, yes, the other two sales houses, Tattersalls and Goffs UK, have a sort of duopoly, and they've ended up doing it but actually what it has done is sort of credentialised it. Many vendors and purchasers have actually enjoyed the process of buying and selling online. So we think it is definitely here to stay. Tattersalls and Goffs sort of did it out of necessity rather than desire and then as time has gone on, they've seen that it works. So actually all they've done is given us more conviction to carry on with what we're doing. And there are things that we've designed, that are going to be our USP, that are slightly different to what they will offer.

[ThoroughBid] is not just a trading platform. Our terms and conditions are nigh on 50 pages long and we've spent a fortune with lawyers to make sure that both the vendor and the purchaser are protected in the process. We want to be seen as the next auction house, but purely online at this stage, which will allow us to control our costs and keep the costs that are incurred by vendors and purchasers to a relative minimum.

TDN: ThoroughBid has been announced as a sponsor of the Racing League, which starts next Thursday. How did you get involved in this new concept?

RA: We met the guys at the Racing League and we thought it was a disruptive young start-up, an enthusiastic business that works well on two folds. One, it fits with what we're trying to achieve. And two, we wanted to show our intent by becoming stakeholders in the industry and putting money directly into something along those lines. Ultimately our investment ends up rippling all the way through to prize-money and into people's pockets.

TDN: When can we expect the first ThoroughBid sale?

RA: We haven't defined a date yet, but it's going to be the end of summer. I would imagine it's going to be in September. It might be that it coincides with the end of the Racing League. We can hopefully speak to all the owners and trainers involved, and try to bring our first catalogue through sometime in early September.

We want to become known for being a company that trades regularly on a certain day. To start with we're hoping once a month, but there's no reason why it won't be every two weeks. Maybe even every week if the demand allows. That's one of our key USPs, flexibility for all, including ourselves and both vendors and purchasers.

Will Kinsey: There's nothing to stop us doing, say, a one-horse sale at the drop of a hat if that's what they wanted, but initially it's one step at a time. We'll hold our auctions on a Sunday. Everyone will know that and can get all their work done in advance. Sometimes the way a physical auction is run isn't the best for every horse in a sale, especially if you're first lot in a sale or last lot and people have not arrived, or they've left already. Obviously this format is much more flexible.

TDN: What's the entry fee for a ThoroughBid sale?

RA: It's £250 plus VAT to enter a horse. The vendor gets 100% of the sale price and there's a 5% charge to the purchaser. They can buy in almost any currency. One of the key things is the speed of the fiscal transaction, which is seven working days, unlike the others who pay 30 days after the end of the auction.

There's no credit. It's effectively taking private sales but making them public, but with the benefit of both effectively selling over the stable door and a public-facing auction. So purchasers are going to have to get used to coming up with the money a little bit quicker, but the point is that the liquidity is there to then hopefully help people get in and trade out of horses quicker.

TDN: What sort of feedback have you had so far?

RA: While people have been positive and optimistic about what we're going to be bringing forward, they say, “Well, how can I buy a horse if I haven't seen it?” The point is you've got the week or 10 days prior to assess them online, get down to your shortlist and then either go and see them yourselves or send your agent, trainer, or vet, because every horse will be available to you. That's part of our terms and conditions. But it's all done from the comfort of the stable. So trainers are not tying up staff too much, and hopefully there's an extra level of engagement there for trainers and studs to actually get people in through their doors and talk about not just that horse but other opportunities that may exist.

WK: Young trainers especially are really excited about it. I think this was coming, online selling was coming before Covid, but Covid has sped that process up. The two sales companies have proven that it works. And we wouldn't be here today if we didn't think it did.

Vendors are now really used to taking pictures and videos of their stock and I think that is going to become the norm. I have found that even at the physical sales it's great to see all that video footage beforehand because I can knock off the ones that I don't want to consider that perhaps before I would have gone to look at. So it really helps me streamline.

TDN: Do you feel there's space in the sales market for a new entity?

WK: There's not just a huge space for online selling, but for a third party. Not that Tattersalls and Goffs don't do a good job, but I think people want another option, and I think they're quite excited by a new company on the block that's offering different terms.

RA: For me as a relatively new entrant to the industry, having been involved in ownership for five or six years, I feel this has to be a fun, engaging process. And I think one part of the racing experience as an owner is the buying and even potentially the selling of the horse. As a company we want to look at that and try to make the user experience even more intuitive and immersive. And I think that we will hopefully connect owners, trainers, agents and vendors in a way that hasn't been done before.

WK: For me, racing has evolved so much even in the time I've been involved, let alone the last 50 years, but selling racehorses has never really evolved in the UK and Ireland. The store dates are still the same and the big sales are in May and June. Well, there's a lot of racing in May and June these days and the days of jump season finishing at Sandown at the end of the season and then National Hunt trainers basically having time off to go and do their business are gone. Time is probably more valuable than ever, so this is where it's a great fit for most trainers.

Primarily, we've come to this stage from a users' point of view and it's something that, as someone that works in the industry, I feel we need. But as a consignor, I'm still going to be selling horses through Tattersalls and Goffs. I don't want people to think, “Oh, there's absolutely no reason for that.” But for syndicate shares, stallion shares, nominations, all those type of things, there's flexibility.

It's also a showcase for the horse's owner or trainer. If you're selling a horse online it's a good advert for you to sell your stud, your yard, your facilities. Every time somebody fresh comes into the yard it's a great opportunity. They might come in to look at the horse and they might say, “Tell you what, I will buy the horse and I'm going to keep it with you.”

RA: We're a small business that's going to be effectively a start-up. And we hope to be still here in 10 years' time, hopefully dining at the top table with Goffs and Tattersalls and competing with them. If we can get the support of the industry behind us, then I think there are a lot of reasons to be optimistic. And look, we're trying to keep money in the game, not take it out. So I hope that people will see all the advantages of what we're bringing forward and they'll back us, because we can't do it without the horses.