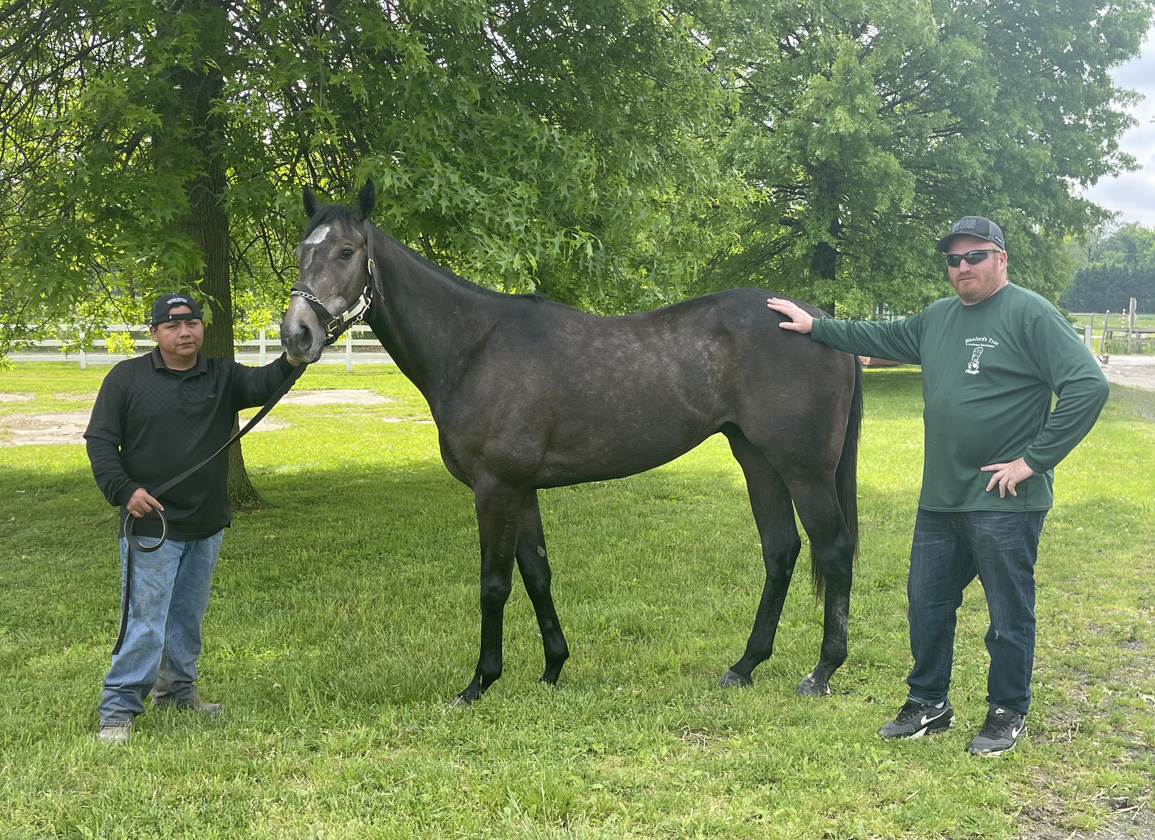 When Crabs N Beer (Blofeld) goes postward against 10 foes in the James W. Murphy S. at Pimlico, he will carry the hopes of small breeders everywhere onto the big stage of the GI Preakness S. undercard Saturday. The 3-year-old gelding is owned by native Marylander Chas Blanford, who has been in the business just six years after taking over the Riders Up Farm of longtime breeder William Fossett. Blanford maintains a broodmare band of five and is dreaming of a first stakes win.

“Bill Fossett is not my biological father, he was a neighbor and I was a kid who didn't have a steady father in my life,” Blanford recalled of his early interest in racing. “So he took me under his wing. He had lots of racehorses for over 50 years and he was thinking about selling the farm because he couldn't handle it anymore. He's 90 years old now. So I just picked it up and ran with it.”

Blanford spent his high school years working on Standardbred farms, but he admitted of having Thoroughbreds, “It was always somewhat of a dream for me to do it.”

While his professional life led him to found Blanford's Tree Service, his mentor made sure horses were still part of his protégé's life.

“Five or six years ago, Bill Fossett gave me Go Get'm Irish (Kitalpha) and I bred her to Jump Start the first time, which produced a horse called One Slick Chick,” Blanford said. “She was a 2-year-old maiden special weight winner and a 3-year-old winner. She was my first homebred.”

One Slick Chick may have been Blanford's first winner, but she was the latest in a long line of Fossett horses.

“The bloodlines that Fossett had go back to a horse named No Fat Chicks (Spring Double), which is three generations,” Blanford said. “These bloodlines have been on this farm forever.”

For all its longevity, Blanford noticed an omission in the family history and it's become his passion to rectify it.

“They are all winners,” he said of the family. “They have a stakes wis at Saratoga over steeplechase with a horse named You the Man (Lear Fan), but nothing on the flat yet. That's what I need to push for. I need to get black-type into these horses. They are capable of doing it.”

Crabs N Beer, who is out of a granddaughter of No Fat Chicks, Get'm Up Pronto, was bred by Blanford's friend Kyle Horlacher.

“Kyle bought Get'm Up Pronto when Bill Fossett was retiring,” Blanford said. “He sent some horses to the sale, so Kyle bought Get'm Up Pronto out of the sale for $1,000 and he bred her to Great Notion. The first foal had bad ankles, so he got cold feet. He had [the mare's second foal] Double Fireball (Imagining) and he had Crabs N Beer. Crabs N Beer was not a very good-looking baby. He was going every which way you could think of. I told him I would take the mare back if he would send me the two babies with her. I gave him $3,000 for the package.”

The transaction was part of Blanford's dream of improving the families he had been entrusted with.

“In the back of my mind, I was thinking I was trying to get these bloodlines proven,” he said. “And that's what I did. I got Double Fireball to the races. She won at Delaware Park on the turf second time. I put her in a claiming race and she was claimed, but she is doing really well, which I am happy about. It's helping me.”

A two-time allowance winner since being claimed in 2021, Double Fireball was sixth in the Apr. 23 Dahlia S. at Laurel Park for Little Man Farm and trainer Anthony Aguirre, Jr.

Crabs N Beer, meanwhile, grew out of his awkward stage and became Blofeld's first winner when he romped home a front-running 9 3/4-length victor while facing maiden-claimer company at Delaware Park last October in his fourth career start. But the win almost didn't happen in Blanford's colors.

“I was getting a little discouraged last year,” Blanford admitted. “Crabs N Beer wasn't doing any good at Delaware. I told [trainer] Jamie [Ness] to drop him in at Timonium for $10,000. And he told me no. It's a lot of money–I don't have deep pockets–but we waited five weeks and he went out and put up what I was told was the fastest maiden race last year at Delaware Park. He put up the fastest time and won it by nine lengths.”

Crabs N Beer has hit the board in six starts since breaking his maiden, including a late-running win against state-bred optional claimers at Laurel while making his turf debut Apr. 16. His lone off-the-board finish came when seventh in the Maryland Juvenile Championship last December.

The gelding, who is 12-1 on the morning line, faces a tough task against an accomplished field in the turfy one-mile James Murphy S. Should he happen to win, he wouldn't be just Blanford's first stakes winner.

“I have not had a stakes winner,” he confirmed. “I've not even had an open allowance or state-bred allowance winner. But I know someone who bred 20 horses and they only had one winner. Everything I've put into the races has won so far. I've bred five or six–One Slick Chick, One Slick Start, Double Fireball, Crabs n Beer, they have all won. They are all our bloodlines.”

The family already has a winner on Preakness weekend after Uncle Irish (Uncle Lino), a son of Go Get'm Irish, romped home a 6 1/4-length allowance winner at Pimlico Friday.

What would a stakes win on Maryland's biggest racing day mean to the 41-year-old native of Cecil County?

His voice filled with emotion, Blanford said, “Everybody is going to hear me.”