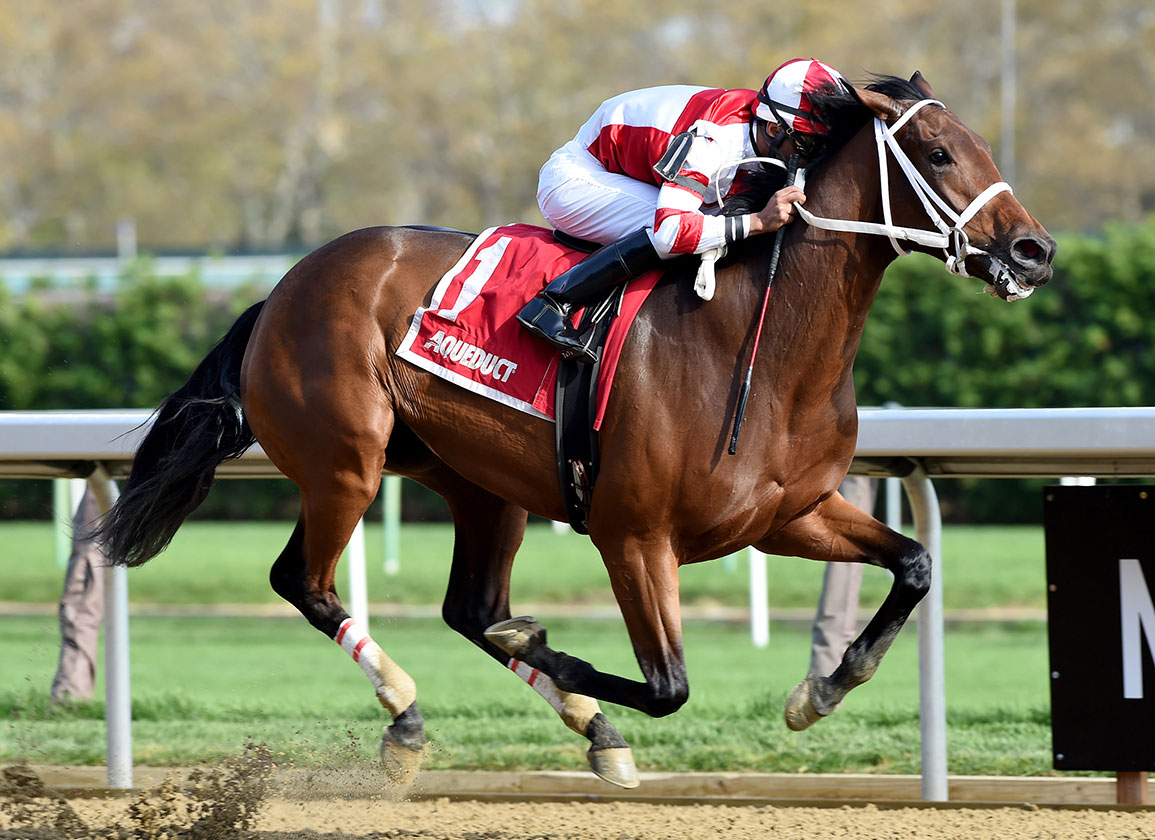 Stretching out to the one-turn mile off a smashing eight-length debut success over a sloppy main track at Parx Oct. 9, Fox Hill Farms’ Daisy (Blame) showed some intestinal fortitude to beat back pace-pressing Oldfashioned Style (Old Fashioned) at the eighth pole and strode home to remain perfect in Friday’s GIII Tempted S. at Aqueduct.

Fast into stride, the $80,000 Fasig-Tipton Saratoga graduate headed off her five rivals linking up with the main track while racing well away from the rail and she and Oldfashioned Style had the race to themselves for all intents and purposes. Never allowed a breather through fractions that were comfortable, but pressured, Daisy, the 5-2 second choice may even have surrendered the lead approaching the final furlong, but battled back gamely inside and kicked away to score by about four lengths. Sweet Candy Dance (Twirling Candy) was an even third ahead of a 2-5 Navajo (Union Rags), who never reached serious contention and finished a lackluster fourth.

“[Trainer] John [Servis] just told me to ride her right out of the gate,” winning jockey Kendrick Carmouche said. “She broke real sharp. With the inside being a little deep, I just wanted to get outside a little. At the quarter-pole, I hit her and she reacted right away and just leveled off. She responded real good when I asked her at the top of the lane. Thanks to John Servis [the trainer] and Mr. [Rick] Porter [the owner], it looks like they have a good one.”

Servis sent out countless graded stakes winners for Fox Hill in the early 2000s, including Zonk, Rockport Harbor, Jostle and future GI Breeders’ Cup Distaff winner Round Pond (who was trained to her victory in 2006 by Michael Matz).

Pedigree Notes:
Daisy was bred in Pennsylvania by Jonathan Sheppard, who has a four-decade relationship with the winner’s female family. The Hall of Fame conditioner trained Daisy’s third dam-a foal of 1976-and while she didn’t amount to much as a racehorse, she became a reliable broodmare, producing Sws Ratings (Caveat), She Can Add (Robellino) and Tada (Tasso) for George Strawbridge. A two-time graded winner, Ratings carried on the family tradition and became the dam of SW Smart Growth (Gone West) and GSW Recording (Danzig) and the granddam of three stakes winners. Lovely Stay was a winner at the races in 2012 and was given to Sheppard, for whom she foaled a full-sister to Daisy in 2016. Lovely Stay was most recently bred to Shanghai Bobby.