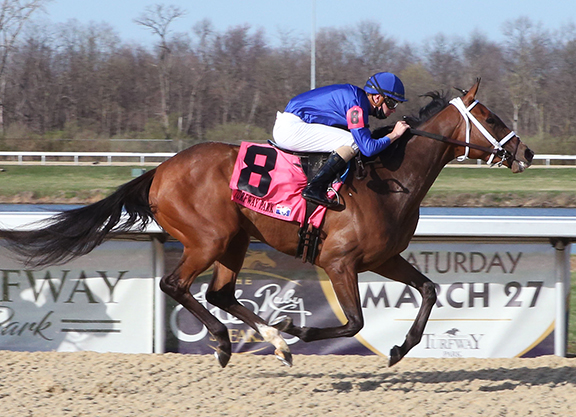 Godolphin's Adventuring (Pioneerof the Nile) rides a two-race win skein as she tries to add her first graded victory in Friday's GII George E. Mitchell Black-Eyed Susan S. at Pimlico. Second choice on the morning line at 4-1, the homebred hit the board in her first two starts–both off-turf tests–at the Fair Grounds late last season. Well supported in her Feb. 16 reappearance at the New Orleans oval, the daughter of dual Grade I winning Questing (Hard Spun) came from just off the pace to romp by 6 1/2 lengths before adding another to the win column in Turfway's Bourbonette S. going a mile over the synthetic Mar. 27.

“Obviously, she's very well bred,” said trainer Brad Cox. “We're hopeful that she'll be able to handle the  mile and an eighth. She certainly appears that she can.

“She broke her maiden in an off-the-turf race on the dirt and performed extremely well. She was able to get the job done on the synthetic and she works well enough on the dirt to give us the confidence to try a graded stake on the dirt. We're looking forward getting her up there.”

Explaining the decision to bypass the Apr. 30 GI Kentucky Oaks, Cox added, “She had enough points to go in the Kentucky Oaks, but we thought the Black-Eyed Susan made more sense. Plus, she wasn't nominated to we'd have had an extra large fee to run.”

“I really like her…She's already a stakes winner, but we need to, hopefully, get some graded wins.”

Boama Corporation's Beautiful Gift (Medaglia d'Oro) broke her maiden second out stretching to a mile at Santa Anita last October. In a pair of starts facing short fields at that venue this term, the half to GSW and GISP Chitu (Henny Hughes) posted a head victory in the GIII Santa Ysabel S. Mar. 7 before succumbing by a half-length to Soothsay (Distorted Humor) in the GII Santa Anita Oaks Apr. 3. Both races were contested at 1 1/16 miles.

Hall of Famer John Velazquez will re-join the 9-5 program favorite who breaks from the 10 hole.

“She's run well,” trainer Bob Baffert said. “I was going to run her in the Kentucky Oaks, but it came up way too tough. That's one of the toughest Kentucky Oaks I've seen. I didn't want to put her through that. I said, 'We'll wait for the Black-Eyed Susan. You try to spot your horses, give them a chance where they have a chance to win.”

Three Diamonds Farm's Army Wife (Declaration of War) went winless in her first three starts last year–all on turf–before graduating in her first try on dirt at Churchill in October. Runner up going a mile in a Churchill optional claimer Nov. 28, she was a nose winner in a Gulfstream optional claimer Mar. 13 before running third behind winner Search Results (Flatter)–who subsequently finished a close-up second in the Kentucky Oaks–in a nine-furlong GIII Gazelle S. at Aqueduct Apr. 3.

“She's a filly we've always been high on. She makes a fabulous impression,” said trainer Mike Maker. “She had a couple of months off and got a little behind, but she's doing well and we're looking forward to it.”

Joel Rosario gets the call on Army Wife, who breaks from Post 1.

Alex and JoAnn Leiblong's Willful Woman (Nyquist) come into this off an optional claiming victory in the slop at Oaklawn Apr. 9. Prior to that, she finished seventh in the Mar. 6 GIII Honeybee S.

“She lost it at the break,” Alex Lieblong said of the Honeybee. “She was looking at something in the infield when they popped the gate and then got flustered when she missed it. It was just one of those deals where we were like, 'Ok. Let's start over.' That's what we did with the allowance. I hated that we missed the series there, but it might wind up being one of those deals where it worked out for the best, if you just give them time.”