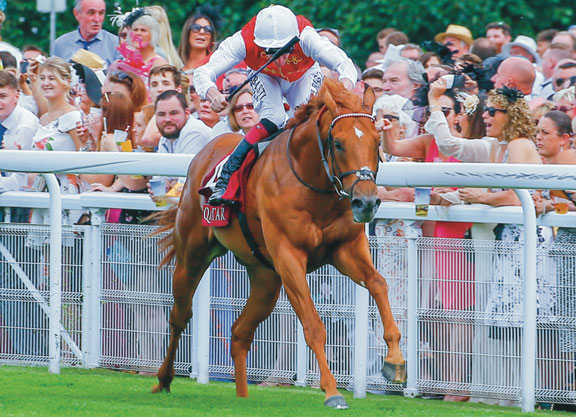 Nurlan Bizakov will unite his British and French studs, Hesmonds Stud and Montfort et Preaux, under the same name: Sumbe, for his birthplace in Kazakhstan.

Bizakov said, “To understand this decision, you have to go back in time. I was born in Kazakhstan in the city of Sumbe. Nestling at the foot of the country's highest mountain, it's a region famed for its agricultural produce and the quality of its horse breeding. I think that these 'country' roots–embedded in an environment where the horse was very present–naturally influenced my decision to breed racehorses.

“At Hesmonds Stud, I was initially able to rely on a very high-class team. Over a period of around ten years, and under the stewardship of stud manager Tony Fry, it became one of the most modern studs in Britain. Further down the line, but in Normandy, I had the opportunity to acquire Montfort et Preaux: a stud farm run by another man of repute, Mathieu Alex. There is a very good rapport between my British and French teams and they work together. After this, I wanted to go one step further by grouping together all my racing interests under one name: Sumbe. I think it's important to ensure a coherent approach to my racing project, in the form of a single entity that unites two teams working in unison. It's also, of course, a reference to my birthplace. There's also no escaping that it's a catchy name which is easy to remember. Finally, it has always brought me luck. We are in it for the long haul: I think that sums up Sumbe's underlying philosophy.”

Bizakov will introduce G1 Commonwealth Cup winner Golden Horde (GB) (Lethal Force {Ire}) to breeders in France in 2021 alongside Le Havre (Ire) and Recorder (GB), and Bizakov said of Golden Horde, who also won the G2 Richmond S. at two before being twice Group 1-placed, “He was a very smart juvenile, before confirming that he had trained on as a 3-year-old when exposed to very high class opposition, and that is what I think the French and European breeders are looking for. He was a very good sprinter and precocious at that. Bred in the purple, he's a magnificent horse and a very good mover.

“In the context of the French stallions' division, a horse with the Golden Horde's profile can find his niche. Bearing the strong imprint of Pivotal (Polar Falcon)–his dam's sire–he's a Group 1 winner who instantly proved a big hit with Tony, Mathieu and myself. We're very sold on the idea of making the Commonwealth Cup winner available to breeders, in addition to supporting him with some very good mares. I would encourage everyone to either replay the videos of his races, or to see him in the flesh at stud, as he's a very impressive individual.”