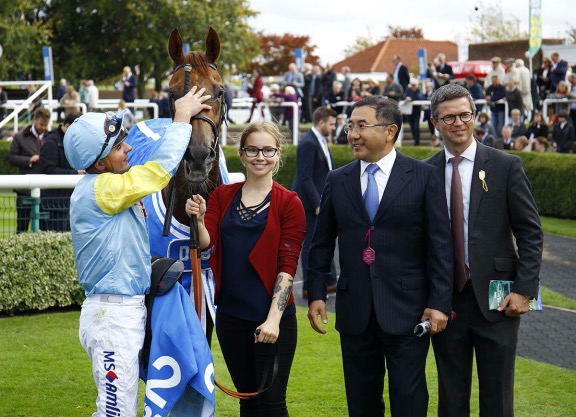 Nurlan Bizakov's breeding operation Sumbe has been expanded further with the purchase of Haras du Mézeray from the de Moussac family.

The acquisition of the 440-acre farm in Normandy follows the 2019 purchase of Haras de Montfort & Préaux, which is just 10 kms from Mézeray and is home to the Sumbe stallions Le Havre (Ire), Recorder (GB) and Golden Horde (Ire). The latter, who has just embarked on his first covering season, had his first mare scanned in foal on Thursday.

Bizakov founded his breeding empire at Hesmonds Stud in the UK. He has retained that 700-acre Sussex farm, which is used for boarding clients' mares or for his own mares visiting British-based stallions, but his entire broodmare band was moved to France last year. Tony Fry, the long-term manager of Hesmonds Stud, has moved to Haras du Mézeray, and Mathieu Alex remains in charge of Haras de Montfort & Préaux.

The Kazakhstan-born Bizakov said of his most recent purchase, “When I bought Montfort & Préaux I realised that the existing land was not big enough to accommodate my own mares as well as those of Montfort & Preaux's clients. When we moved our 30-plus mares from England it put it under pressure, and from day one, Mathieu, Tony and I have been looking for some options around Montfort & Préaux. Then we decided to look at Mézeray, which was on the market and is just 10 minutes from Montfort & Préaux. It has been a long journey but finally we've done it and I am very happy because Mézeray is a very big name in French breeding. It has a long history, having been founded by Paul de Moussac in 1962. So it is coming up for its 60th anniversary next year.”

Montfort & Préaux has also produced a number of top-class performers in recent seasons, including the dual Classic heroines Avenir Certain (Fr) and La Cressonniere (Fr), both by Le Havre, who is also the sire of the David Menuisier-trained dual Group 1 winner Wonderful Tonight (Fr). She was bred at the farm, along with Suedois (Fr) and Mont Ormel (Fr) (Air Chief Marshal {Ire}).

Bizakov continued, “We will consider Mézeray and Montfort & Préaux as one farm. Obviously some staff will be focused on one farm and some on the other but I am sure there is plenty of room for synergy between the two. I hope that clients from both farms will benefit from this merger as well because it will give us more room, more facilities and more infrastructure.”

The owner/breeder indicated that he is keen to expand his stallion operation in France. Along with the three stallions at Montfort & Préaux, Mézeray is currently home to De Treville (GB), an Oasis Dream (GB) half-brother to Too Darn Hot (GB) who will be represented by his first runners this season.

“We will discuss with his owner Rashit Shaykhutdinov what he would like to do with De Treville,” he said. “We would definitely like to stand more stallions in the future. That was the main reason that I decided to buy Montfort & Préaux in the first place, because they had Le Havre and Recorder, who I hope will have a big year this year. Now with Golden Horde we have a new stallion at the farm and this year we will look for some options to buy. I would like to stand a Group 1-winning miler and we might look at a mile-and-a-quarter horse as well.”

“Golden Horde has settled in very nicely,” said Mathieu Alex. “He's a horse with a great mind. He has already covered 16 mares and the first one has been scanned in foal. He's a very exciting horse to have in France as he is a Royal Ascot Group 1 winner, so that is very exciting for French people. He had great form at two, which is always a plus, and he's a good-looking horse, so he's been popular.”

Of the inclusion of Mézeray in the operation's portfolio of studs, he added, “It is a great opportunity to be able to purchase such a prestigious farm where 27 Group 1 winners, including two Prix de l'Arc de Triomphe winners, were bred. Good land is so important and definitely one of the keys for racing success. Nurlan Bizakov loves the breeding side of this industry and it made sense to go ahead with this farm located 10 kms away from Haras de Montfort & Préaux. It is a very exciting project and all the team involved feel very privileged to be part of it. It is also great news for France where the racing system is one of the best in the world. It's great to see major players want to be here.”

Despite moving his breeding stock to France, Bizakov still has horses in training in Britain and he singles out the 96-rated treble winner Shandoz (GB) (Golden Horn {GB}), trained by Roger Varian, as one he is particularly looking forward to seeing return to the track this season.

He said, “We have a good bunch of horses to go to war with. We bought two by Recorder last year to support our stallion and we sent one of those to England to Clive Cox, who trained Golden Horde. In England, we have horses with Roger Varian, John Gosden and Clive Cox, and in France we have a good bunch of trainers as well. With French premiums we will probably have more horses in training in France.”