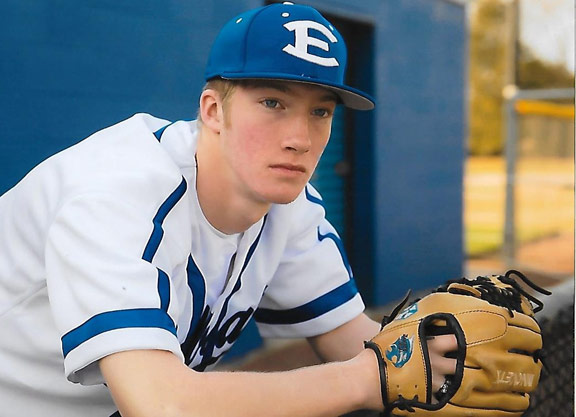 When lifelong owner and breeder Nathan Granger picked up a filly by his late stallion Bind, bred by his partner Jay Adcock, for just $13,000 at the ESLA September Sale, he knew right away that she was something special. So special in fact, that he gave her a name of the highest honor in the Granger family, WUPKAR, which stands for Wake Up, Pray, Kick Ass, Repeat. This was the slogan of Granger's son Ross, who was diagnosed with an astrocytoma in his brain stem shortly after his high school graduation and passed away 16 months later.

“We went through a horrible time five years ago,” Granger said. “My oldest son, Ross, the oldest of five, was diagnosed with a brain tumor right after high school graduation. He was going to go pitch in college. His mantra during the time he was ill was WUPKAR, Wake Up, Pray, Kick Ass, Repeat. He really lived by that until he passed. He spoke with youth groups, baseball teams, etc. about his faith and living every day in the fullest. He was phenomenal. He was my hero.”

Granger, who owns about 15 mares in partnership and has three horses in training, originally purchased WUPKAR with the intention of adding her to his racing stable.

“I bought her at the yearling sale very cheap because of a small issue on an x-ray,” Granger said. “It was a youth issue, nothing that would stop her from performing. She was a picture and everything you'd want in a racehorse. She was just that good. Initially the plan was to run her, but I have a lot of horses, so sometimes I have to sell a good one to pay for all the others.”

Granger entered the filly in the Texas 2-year-old Sale Wednesday, where she summoned $150,000 from Wayne Sanders and Larry Hirsch after breezing in :10 flat. After hearing the meaning behind her unusual name, WUPKAR's new owners decided to keep it.

“Al Pike told them the story and they said they would keep the name,” Granger said. “I was thrilled. I actually cried. I did intend to race her, but she was just so good. Hopefully she will win a lot of races down the line and people will ask what the name means and we can tell them about it.”

In keeping with their son's wishes, the Grangers started the Ross Granger Memorial Fund in his honor.

“Ross' illness was 16 months, so he really told us everything he wanted,” Granger said. “One of the things he wanted to do was set up a memorial fund. We had taken out a general cancer policy out on all of our kids because a buddy was selling them, so the first $20,000 of the fund was Ross' own money that he put up. We give five $2,000 scholarships every year to kids in our area and we also help other families whose children have brain tumors like Ross.”