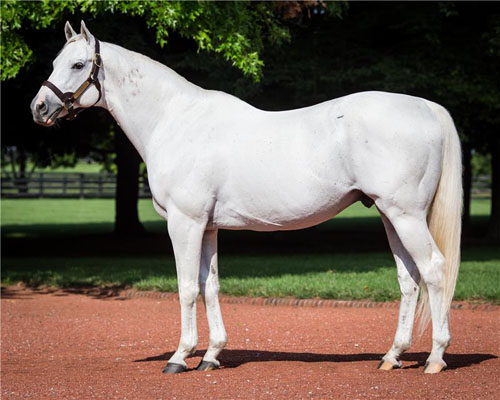 Through racing of July 5, when we ran the Midyear APEX data, a North American racehorse needed to have earned just over $40,000 thus far in 2015 to qualify as a Midyear 'C Runner', and just over $83,000 to qualify as a Midyear 'A Runner'; you can see the amounts (converted to US$) for the other jurisdictions in the accompanying table. These are the top 8% of runners in 2015 after the July 4 weekend; if you take the view that $40,000 in earnings is maybe a little better than break-even just on training costs, it's easy to understand why we need for sires to aspire to produce ABC Runners. Then, of course, you hope to go up from there.

Just looking now at 2015, there were 39 North American or European sires which sired 18 or more 2015 ABC Runners through July 5, of which 17 sired 25 or more. Gainesway's Tapit (50) and Darley's Medaglia d'Oro (48) have streaked clear of the field in this category and are one-two on the 2015 year-to-date TDN General Sire List (click here), where Tapit's margin is nearly $3-million, partially by virtue of having sired four Grade I winners (second in that category to Dubawi's seven). Darley claims three of the top five spots in this department (Sires of Midyear 2015 ABC Runners), as their Shamardal ranks third, with 'Midyear' 35 ABC Runners this year, and Dubawi is tied for fourth with Coolmore's Galileo, with 34 each. Darley's Street Sense (30) also ranks among the top 10 sires by 2015 ABC Runners; we should point out again that a horse may qualify as a 'Midyear ABC Runner' on the basis of earnings through July 5, but there are horses who will not end up qualifying at all, or qualifying in a lower group, when the year-end earnings thresholds are calculated. But we sure get a pretty good idea from the Midyear numbers.

Tapit (18) edges Medaglia d'Oro and Galileo (17 each) by number of Midyear A Runners, with Dubawi (16) close up. There is significance in the high rankings of both Coolmore Ashford's Giant's Causeway (14 Midyear A Runners 2015) and Darley's Street Sense (13). Giant's Causeway, 18 this year, has an absolutely classic profile of a sire whose runners improve with age, with these ABC Age Ratings: 2yo – 1.49; 3yo – 1.82; 4yo – 1.76; 5yo+ – 2.50). For his part, Street Sense is having a really big year: his 13 A Runners include Wedding Toast, who trounced champion Untapable by five lengths last time out in the GI Ogden Phipps S. on Belmont Stakes day. Shamardal, who ranks third by ABC Runners, has 11 Midyear A Runners; Lane's End's Candy Ride and Curlin; the Irish National Stud's Invincible Spirit; and deceased Indian Charlie, a former Airdrie stallion, have 10 each. Candy Ride also ranks fifth by ABC Runners (31), while Giant's Causeway, Street Sense, and Invincible Spirit each have 30, and Curlin is one of three sires with 29. Curlin has an impressive 16 ABC Runners this year from his current 3-year-old crop, his third crop. Indian Charlie, for his part, has five A Runners this year from his final crop of 3-year-olds.

Among third-crop sires with their first 4-year-olds racing this year, 11 F2011 sires have seven or more Midyear 2015 ABC Runners, headed by Coolmore's Mastercraftsman, with 17. Gilltown Stud's Sea The Stars and WinStar's Colonel John have 12 each, while three are tied with 11: Coolmore's Fastnet Rock, who leads this group with seven Midyear 2015 A Runners, including 3-year-old Group 1 fillies Qualify and Diamondsandrubies; WinStar's Pioneerof The Nile; and California's Vessels Farm's Square Eddie, who is proving a very effective sire for Paul Reddam and is nearly top of the 2015 North American 2-Year-Old Sire List. One of Pioneerof The Nile's 2015 ABC Runners is of course Triple Crown winner American Pharoah; interestingly, eight of his 11 are 4-year-olds, indicating they are training on just fine; only Mastercraftsman (12) has more 4-year-old Midyear 2015 ABC Runners among F2011 sires. Banstead Manor's Champs Elysees is sire of G1 Ascot Gold Cup winner Trip To Paris among seven 4-year-old ABC Runners. Also with seven 4-year-old Midyear 2015 ABC's is Adena Springs North's Giant Gizmo. This seems particularly relevant as he's a son of Giant's Causeway, who as we've already seen has a very distinct 'improvement with age' profile. On the general question of whether Giant's Causeway will break off from Storm Cat into his own line–he's already the sire, as you know, of Shamardal (sire of Lope de Vega), First Samurai {sire of Lea}, and Footstepsinthesand–Giant Gizmo is the leading third-crop sire in Ontario, and the F2012 sire Eskendereya, as we'll see below, also displays definite indicators of fitting into the Giant's Causeway better-with-age pattern.

Whereas there are only eleven sires with first foals 2011 and seven or more Midyear 2015 ABC Runners, there are as many as 22 (F2012) sires with their first 3-year-olds racing which have five or more Midyear ABC Runners this year. Ashford's Munnings and Taylor Made's Eskendereya lead this group with 13 each, followed by Ashford's Lookin At Lucky (impressive leader among F2012 sires with his 3.61 A Runner Index) and Lane's End's Quality Road, last year's Leading Freshman Sire, with 11 each. Darley's Midshipman has 10, followed by Ballylinch's Lope de Vega, last year's leading European Freshman Sire, with nine. Five different F2012 sires have four Midyear A Runners each this year: Munnings, Lookin At Lucky, Midshipman, Lookin at Lucky, and Spendthrift's surprise package, Temple City. He, in fact, has seven Midyear 2015 ABC Runners–three A's and four B's. He's looking very much for real.

This story was posted in Apex Up Close, Shared News.