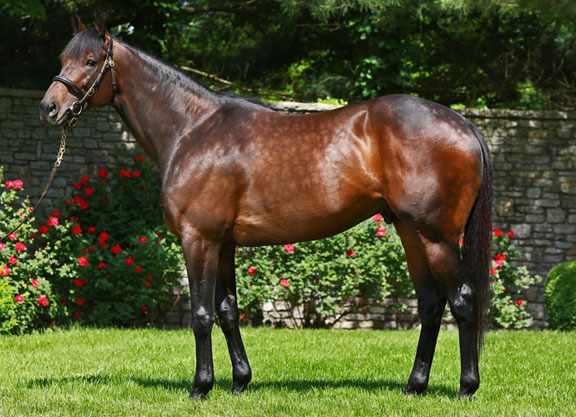 One of the main objectives of APEX ratings is to describe 'the frequency with which' sires get runners which rank in certain percentile groups of earners in a calendar year or racing season: 'A Runners' rank in the top 2%; 'B Runners' in the next 2%; 'C Runners' in the next 4%; and therefore 'ABC Runners' comprise the top 8% of earners, in a given racing jurisdiction (for example, 'North America'), in a racing year (click here for a detailed explanation of APEX ratings). For 'A Runners', the index scale is that 2.00% A Runners/Runners in a Year (or 'Year-Starters') equals an A Runner Index of 1.00; if a sire has 5.00% A Runners/starters in a given year, his A Runner Index for that year is 5.00%/2.00%, or 2.50.

Besides tallying the top sires by A Runner Index, as we did for North American/European sires in last week's column (click here), it's of course of vital importance and interest to track the progress of young sires, in this (APEX) and many other respects (progeny earnings, for example) as well. For that reason we routinely organize them by what we might call 'sire class,' meaning Class of 2012, all sires which meet other APEX parameters whose first foals arrived in 2012; Sire Class of 2013, etc. Keeping in mind sires are not eligible to be assigned APEX ratings until the year their first 3-year-olds run (so never any APEX ratings for 'freshman sires', with their first 2-year-olds), today we want to look at the two youngest APEX North American/European sire classes, precisely being F2012 sires, with their first 4-year-olds 2016; and F2013 sires, with their first 3-year-olds, now only halfway through their 3-year-old years.

Of the top 15 NA/EU sires with first foals 2012 by A Runner Index, just three stand in Europe, but they are also the top three European third-crop sires by cumulative worldwide progeny earnings on the TDN third-crop sire list (click here). Haras de Bonneval's Siyouni (2.28) is the top F2012 Euro sire by A Runner Index, ahead of Whitsbury Manor's Showcasing (1.79) and Ballylinch Stud's Lope De Vega (1.75). Siyouni also has an edge by number of A Runners (this could include horses which count as one A Runner in three separate seasons, as 2-year-olds of 2014; 3-year-olds of 2015; and/or 4-year-olds of 2016), with 10; both Showcasing and Lope De Vega have nine. On the cumulative TDN European third-crop list, Lope De Vega is the leader by worldwide progeny earnings ($6.6-million), ahead of Siyouni ($5.0-million) and Showcasing ($4.8-million); Lope De Vega also leads in all six black-type categories, including 15 Black-Type Winners (BTW), eight Group winners (GSW), of which two are Group 1 winners, to date.

Among North American third-crop sires, the three leaders by cumulative worldwide progeny earnings (click here) are: Coolmore Ashford's Munnings ($9.2-million); Lane's End's Quality Road ($8.3-million); and WinStar's Super Saver ($7.8-million). Munnings is the leader by number of Black-Type Winners (15) and Black-Type Horses (22); Super Saver is the leader by number of Graded Stakes Winners (6), second to Claiborne's Blame (10) by Graded Stakes Horses (9), as well as leading this group by Grade I Winners (3) and Grade I Horses (4). Interestingly, though, Munnings ranks only #6, and Quality Road #8, among eight North American F2012 sires with A Runner Indexes >2.00. Two of the eight, Silver City (was in Texas, reportedly exported to the Philippines) and Bullsbay (in Pennsylvania), each has two A Runners from under 50 year-starters, but there are four others with A Runner Indexes over 2.00.

The leading North American F2012 sire by both A Runner Index and number of A Runners is another Coolmore Ashford sire, Smart Strike's son Lookin At Lucky, who has a 2.78 A Runner Index, with 13 A Runners to date. Two sires which stood for under $10,000 in 2016 come next: Darley's Midshipman (2.65) and Ocala Stud's Kantharos (2.63), who stepped up again with his first Grade II winner, the unbeaten 3-year-old filly Ancient Secret, in the GII Lake George S. at Saratoga last Friday. Spendthrift's Temple City (2.20), sire of Grade I winner Miss Temple City and Grade II winner Bolo in his first crop, is thus one of six North American F2012 sires with 100+ year-starters and A Runner Indexes over 2.00 through July 11. Lookin At Lucky is also leading sire of A Runners, with 13, followed by Munnings and Quality Road, with 11 each; and Midshipman, Temple City, and Siyouni, with 10 each. Most of Lookin At Lucky's A Runners thus far have been of Listed/Grade III standard rather than higher, whereas by contrast Super Saver has just seven A Runners (1.18), but five of them are Grade I or Grade II winners. Sires with their first 4-year-olds are still a work in progress, and this group of North American third-crop sires is definitely still evolving; a half-dozen or more are still knocking on the door.

Uncle Mo is probably the first sire ever to make as big a start as he has with as big a crop (152 named foals of racing age), so it's hard to know how to compare him to sires who have made great starts with far smaller crops in the past. But, barely halfway through the year he has his first 3-year-olds, Uncle Mo has sired 16 Black-Type Winners (10.5%), nine Graded Stakes Winners (6%), and three Grade I winners (2%). If we allow for a normal increase in Black-Type winners as the first crop gets a bit older, combined with an extrapolation based on the principle '6% is the new 10%', Uncle Mo would compare, in the old days, to a sire who was getting 17% BTW and 10% Graded SW, that sort of neighborhood. In other words, we're saying the sort of start Uncle Mo has made, it equates so far to how that sort of sire–Danzig, Storm Cat, A.P. Indy–started at stud.

In APEX terms, Uncle Mo so far has a 5.75 A Runner Index, with 20 A Runners (a few, like Nyquist, both as 2- and 3-year-olds) from 174 year-starters. In APEX terms, as in black-type terms, it's the sort of figure we haven't seen in at least 20 years, since A. P. Indy's first crop–which was 45 foals– hit the racetrack in 1996/97. Even with a huge crop compared to past superstar sires, the middle of their first foals' 3-year-old years is still early to be able to be sure of much in the way of trends, but it is striking that Uncle Mo's 3-year-old ABC Index (2.70) is even higher than his 2-year-old Index (2.41), suggesting that they are training on, no problem.

Among a relatively small group of 62 North American and European sires with first foals 2013 which qualified for APEX ratings (one criterion: 10+ foals of 2013), the two tables listing the top F2013 sires by number of A Runners and ABC Runners probably tell us most of what we can actually know about this group so far. Number of A Runners: Uncle Mo 20, Zoffany 8, Twirling Candy 6, then a group of six sires with three each–in other words, a group that is only just starting to take shape. Number of ABC Runners: Uncle Mo 35, Twirling Candy 23, Zoffany 17, then back to Archarcharch in fourth, with 12. Yes, they were among a small group which had a big shot with 100+ year-starters, but at first glance–the first time these sires have been assigned APEX ratings–Coolmore's Uncle Mo (Ashford) and Zoffany (Ireland), and Lane's End's Twirling Candy are the three which are siring quality in quantity so far. Plenty of others are hinting at quality, but these three are the household names so far, and Uncle Mo has started like he might be a new name even non-racing households come to hear of.

Fasig-Tipton bumped the Saratoga catalogue by 26% last year, from 165 yearlings catalogued in 2014 to 208 last year. It paid off, too, as the gross increased by $13.5-million, or 40%, even as the average increased 10%, to $322,448. They have taken the bold step of increasing the catalogue again this year; there are 252 numbered, but TDN's Heather Anderson tells me there are really only 250 pages, which is a 21% rise on 2015. Mind you, Fasig's Boyd Browning is at pains to point out there was not a plan to increase the numbers; rather, the sales company recruits like mad and every year takes whatever number turn out to look like 'Saratoga yearlings.' But in light of the bumpy ride at Fasig July in Lexington two weeks ago, it will probably be a big win if Saratoga's gross can break the $50-million mark, which would be a 7% increase from last year.

Eleven sires have between 7-13 yearlings catalogued in Saratoga's main sale, scheduled for August 8-9, and possibly not entirely by coincidence, the highest representation is by Gainesway's Tapit and Coolmore Ashford's Uncle Mo, with 13 each. Hill 'n' Dale's Curlin (whose fee has increased from $25,000 when these yearlings were bred, at Lane's End, to $100,000 this year), Spendthrift's Into Mischief, and Coolmore Ashford's late Scat Daddy have 12 catalogued each. Into Mischief has as many 2014 2-year-olds–over 140–as he had foals in his first four crops combined; so far he has had 33 2-year-old starters, just five winners, but three of those have come in the last week, and plenty of others are knocking on the door. They're just very fast. Songbird's sire, Darley's Medaglia d'Oro, has 10 catalogued, while two sons of A.P. Indy, Spendthrift's Malibu Moon and Darley's Bernardini, have nine catalogued each. Claiborne's GI 2013 Kentucky Derby winner Orb is the top first-year sire, with eight catalogued, while Coolmore Ashford's 2012 Eclipse 2-year-old colt champion Shanghai Bobby, by Into Mischief's sire, Harlan's Holiday, has seven catalogued. WinStar's now-veteran sire Speightstown also has seven catalogued. There are also four yearlings by Claiborne's War Front, three by Coolmore's Galileo, and two by Juddmonte's Frankel in the catalogue.

Uncle Mo has nine more catalogued for the NY-bred sale, which is August 13-14, which makes his 22 the highest catalogued during the week for any sire. Two Sequel NY stallions, the veteran Freud (19) and the freshman sire Mission Impassible (18), a son of Unbridled's Song who is currently North America's leading freshman sire, with two winners but three Black-Type Horses, have the highest representation in the NY-bred catalogue. Take Charge Indy, a half-brother to Will Take Charge who won the 2012 GI Florida Derby in his own right and stands at WinStar in Kentucky, has 10 in the NY-bred sale, as well as two in the main sale. He's the only other sire with double-digit representation in the NY-bred sale.