Big Names To Train Up to Breeders' Cup 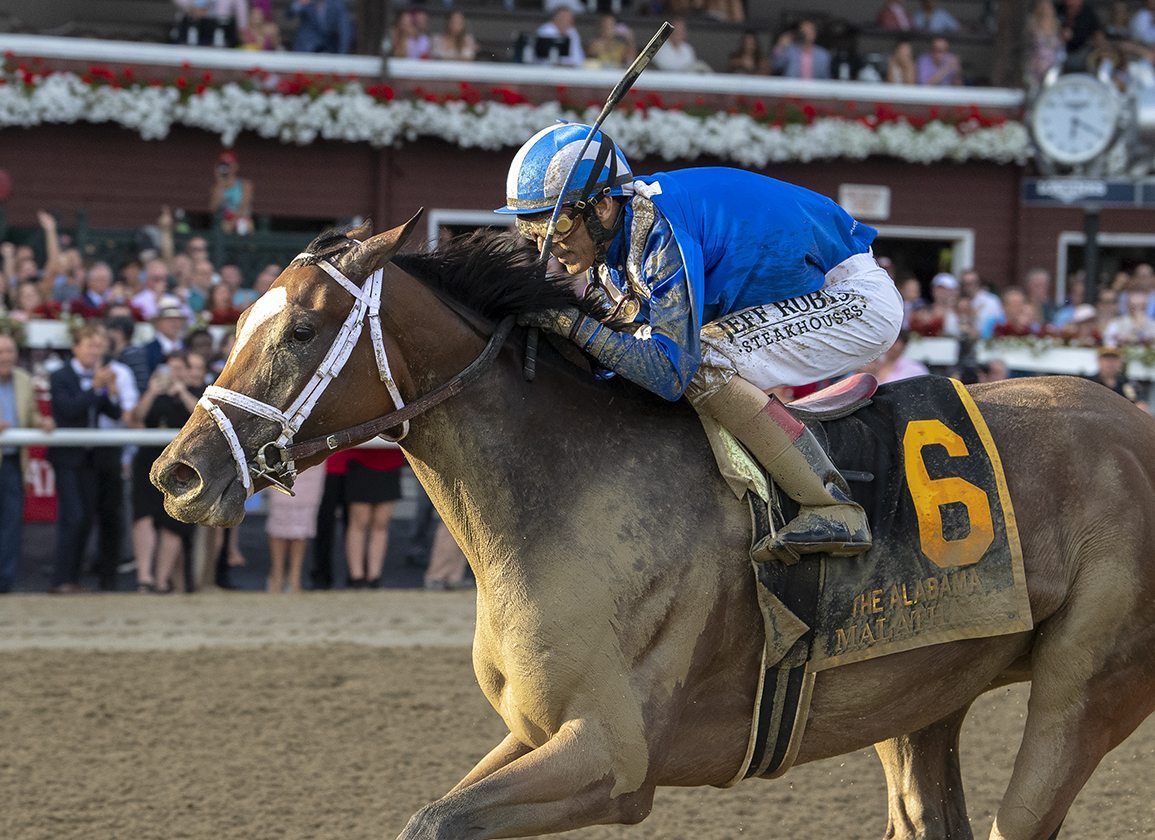 A pair of Belmont-based Grade I winners turned in works over the last few days and will be trained up to the Breeders' Cup at Del Mar Nov. 5 and 6, their trainers confirmed Sept. 19.

Shadwell Stables' 'TDN Rising Star' Malathaat (Curlin) breezed an easy four furlongs over the Belmont training track Sept. 18 in :49.49, her first breeze since winning the GI Alabama S. at Saratoga Aug. 19. She will not have another start prior to the GI Longines Breeders' Cup Distaff at Del Mar Nov. 6.

“It was her first work back and she did it well,” Todd Pletcher said. “Her energy level is really good at the moment. We plan on training up to the Breeders' Cup.”

Winner of the GI Ashland S. on seasonal debut, the $1.05-million Keeneland September yearling outgamed Search Results (Flatter) in the GI Longines Kentucky Oaks before suffering her lone defeat to date at the hooves of Maracuja (Honor Code) in the GI CCA Oaks July 24. She led home a 1-2 finish for her sire in the Alabama, besting Clairiere by a convincing 1 1/2 lengths.

Klaravich Stables' Domestic Spending (GB) (Kingman {GB}), a two-time Grade I winner this season, worked five furlongs over the Belmont inner turf course in 1:00.80 Sunday morning in the company of stablemate and French Group 3 winner Flop Shot (Ire) (New Approach {Ire}) and will stretch out to 12 furlongs for the first time in his next start, the GI Longines Breeders' Cup Turf Nov. 6.

“They went fine, it was a good work for both of them,” trainer Chad Brown told the NYRA press office.

Dead-heat winner of the GI Old Forester Turf Classic in May and the GI Resorts World Manhattan S. the following month, Domestic Spending came with a late run in a paceless renewal of the GI Arlington Million Aug. 14 and just missed.

Klaravich's Bricks and Mortar (Giant's Causeway) won the 2019 Million and successfully handled the stretch out to the mile and a half in the Turf to secure Horse of the Year honors.

'TDN Rising Star' Life Is Good (Into Mischief), runner-up in the GI H. Allen Jerkens S. in his return to the races Aug. 28, tuned up for Saturday's one-mile GII Kelso S. with a half-mile work over the Belmont training track Sept. 18. The bay colt, campaigned by CHC Inc. and WinStar Farm, covered the distance in :48.46 (17/132).

“I thought he worked super,” Pletcher said. “I was really pleased with the way he went and it looked like he was moving along there really well.”

Pletcher gave no indication as to a potential Breeders' Cup destination for Life Is Good.

Also on the worktab for the Pletcher barn was 'TDN Rising Star' Wit (Practical Joke), who went a half-mile in :49.93 (70/132) while prepping for the GI Champagne S. at Belmont Oct. 2. Winner of his first two trips to the post, including an eight-length romp in the GIII Sanford S. July 17, the $575,000 KEESEP yearling was off to a sluggish start in the GI Hopeful S. Sept. 6 and came home second to Gunite (Gun Runner).

“He worked well,” Pletcher said. “Hopefully, we get a little cleaner break this time. It certainly hurt his chances, he fell on his head leaving there, but I thought he ran on courageously after that.”

Pletcher added that Annapolis (War Front), accorded 'Rising Star' status for a highly impressive debut over the Saratoga turf course Sept. 4, would make his next appearance in the GII Pilgrim S. at Belmont Oct. 3.

Gufo (Declaration of War), last-out winner of the GI Sword Dancer S. at Saratoga Aug. 28, will make his next start in the Oct. 9 GI Joe Hirsch Turf Classic Invitational S. He breezed an easy half-mile in :52 over the Belmont inner turf course Sunday morning.