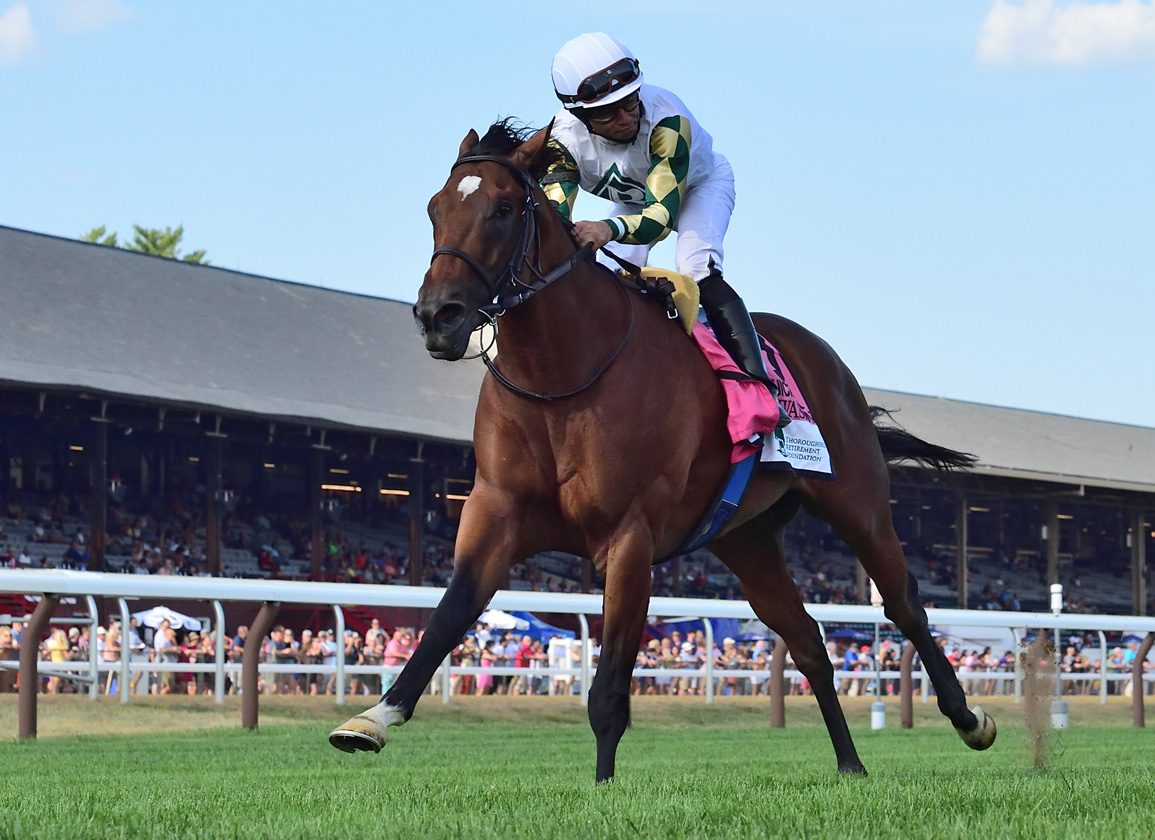 Big Invasion (Declaration of War)'s enormous kick carried him home to a sixth victory in a row in Saratoga's Mahony S. by three effortless lengths.

Coming into the race with four straight stakes victories, the GIII Quick Call July 17 at this venue among them, he was hammered down to 1-5 favoritism in his quest to continue the streak and he made it look a gift. He was equally dominant in the May 29 Paradise Creek at Belmont, William Walker at Churchill Downs May 4, and in the Texas Glitter S. in Hallendale Mar. 26. His only blemish was on debut Jan. 7 behind stakes-placed filly American Starlet (Twirling Candy) who went gate to wire after Big Invasion slammed into the gate on the break.

Rating well off a quick early pace set by That's Right (Goldencents) and a pursuing European invader Cadamosto (Ire), he tracked from fifth on the fence through the early part of the bend. Gradually shifting out to the four path, Joel Rosario set his mount loose in upper stretch and the race was over by the final furlong. Big Invasion inhaled his competition and won geared down by three lengths in a quick 1:01.42.

“I've always thought he was the best 3-year-old in the country on the grass sprinting. We just don't have a program with Grade 1, Grade 2, that's the way the program is made,” said Clement post-race in regards to a start in Grade I company. “But, I don't know, I'd have to talk to [owner] Mr. [Dean] Reeves. I need to give him some time at some stage and maybe we can think about a race like the Breeders Cup even if it's very ambitious. Why not?”

Big Invasion is the third black-type earner in a row for his dam, who claims several multiple winners as half-relations. Curls in Place is out of a stakes-winning half-sister to GSP Going Wild (Golden Missle). In addition to We Miss Susie, the winner is also half to SP Unitedandresolute (Violence). They have a 2-year-old half-sister by Empire Maker, a yearling half-brother by Air Force Blue, and a 2022 half-brother by War of Will. The dam went to Maclean's Music for 2023. Click for the Equibase.com chart or VIDEO, sponsored by TVG.