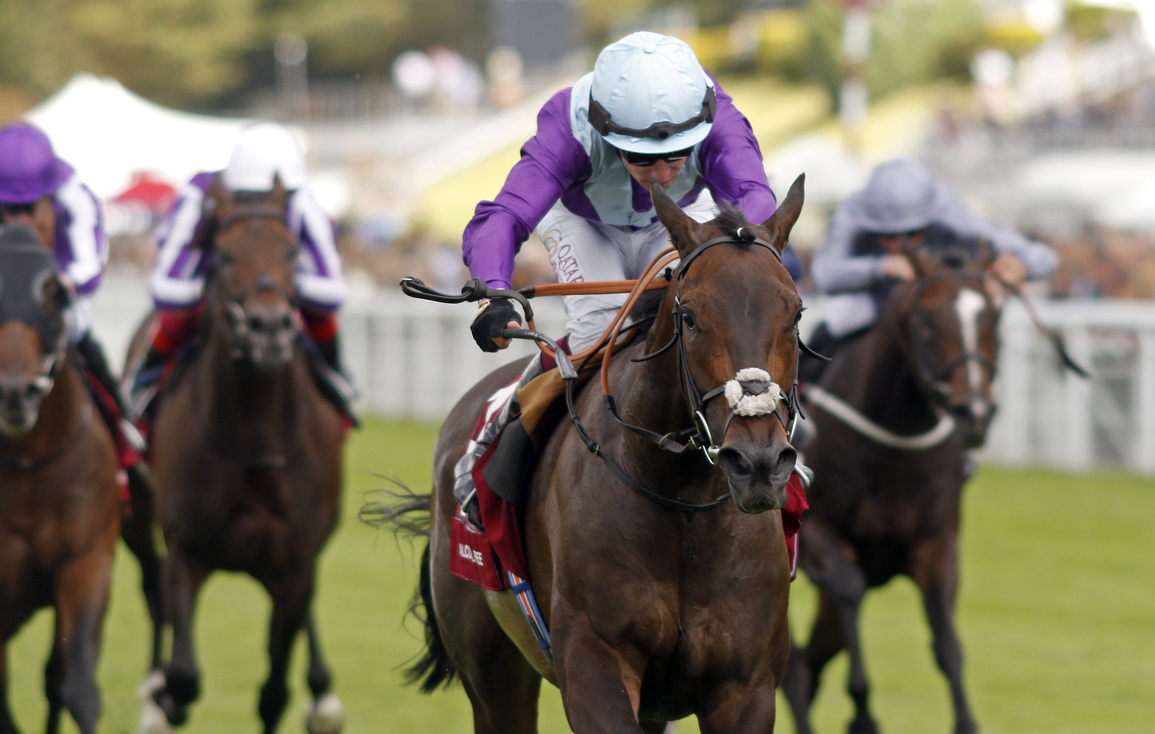 In the battle between the 3-year-old colts and fillies, it was Jeff Smith's Alcohol Free (Ire) (No Nay Never) who prevailed over Poetic Flare (Ire) (Dawn Approach {Ire}) with an impressive success in Wednesday's G1 Qatar Sussex S. at Goodwood. Trapped wide throughout the early stages from her wide draw and forced to take back and race towards the rear, the 7-2 second favourite who had annexed the G1 Coronation S. at Royal Ascot June 18 was delivered by Oisin Murphy to cut down Jim Bolger's G1 2000 Guineas and G1 St James's Palace S. hero approaching the furlong pole. Brushing that 11-8 favourite aside, she stayed on strongly to score by 1 3/4 lengths, with the same margin back to Alcohol Free's G1 Falmouth S. conqueress Snow Lantern (GB) (Frankel {GB}) in third as the Classic generation dominated. “Alcohol Free is so, so talented and what a thrill I got from that,” Murphy said. “The race really ran from when we turned into the straight and then it was a grind to the line.”

Showing talent from the outset, Alcohol Free raced solely over six furlongs with success in the G1 Cheveley Park S. at Newmarket and a second in Salisbury's G3 Dick Poole Fillies' S. in September to show from a light campaign. Back with a win in the seven-furlong G3 Fred Darling S. at Newbury Apr. 18, she was an uncertain stayer heading to the May 2 1000 Guineas at Newmarket and that was still a question mark after she finished fifth there but in the Coronation she emphatically proved her staying power. Forced to make the running when third in the Falmouth at Newmarket July 9, she may have been compromised as much by quicker ground as the tactics and so when the rain came the Kingsclere confidence rose.

Forced out on the track soon after the start as Tilsit (First Defence) made his move forward, Alcohol Free was going to have to do it the hard way as had so often been the case throughout her career. Reined back to race alongside Snow Lantern as the GI Breeders' Cup Mile hero Order of Australia (Ire) (Australia {GB}) put the pace to the race kept company by Century Dream (Ire) (Cape Cross {Ire}), she had to surrender first run to Poetic Flare who had been ideally placed tracking that duo. No sooner had Keving Manning forged a narrow lead on the favourite from Century Dream heading to the furlong pole, Alcohol Free was upon him and the result was quickly settled as she swamped him to become the first of her sex to win this since Soviet Song (Ire) (Marju {Ire}) in 2004.

“I knew James Doyle would go forward on Century Dream, but on his own terms and in his own rhythm,” Murphy reflected afterwards. “I knew Tilsit under Kieran Shoemark and Alcohol Free would fight for the same position. Unfortunately, she is 440kgs and Tilsit is probably 500kgs plus. I was never going to win that battle and was happy to come back and trust that Kieran would move at the right time and that I would be able to get out and slip into the race. I can't thank everyone at Park House enough. Alcohol Free really can be a handful in the mornings. Cassia has to deal with her every day and deserves a medal because she can be really tough work.”

Trainer Andrew Balding added, “Oisin was at pains to try and tuck in and get some cover, because she's so much better when you are able to do that and she has got something to aim at. Poetic Flare is a very good horse, but she really did it well in the end. I am sure there were hard-luck stories, but I am sure she was the best horse on the day. It was lovely to see her do that because we have always believed in her. It is no easy task taking on the colts and older horses and to do it in that style was just fantastic.”

“Watching her work is demoralising for the other horses; we have to keep swapping the lead horse because she is just so, so good,” her handler continued. “You see her afterwards and she is hardly blowing–it is effortless really. She has been the victim of bad draws whenever she has run, to be honest. She probably would have won the Dick Poole, and, with a good draw, I think in the Guineas she would have gone close had she been drawn in the middle or to the far side. It was Jeff Smith's idea in the first place, and I don't think it's a bad idea, to put her in the [Aug. 18 G1 Juddmonte] International at York and we decided to keep her in at yesterday's forfeit stage. It might be asking a bit much, going a mile and a quarter, but she's a filly that has won three Group 1 races, so we have very little to lose. If it doesn't work, we'll regroup and go back to the mile race on Champions Day.”

Una Manning said of the runner-up, “Kevin [Manning] said for Poetic Flare that it was the same as France again. The ground just blunted his speed and I would say the wind drying it out has just made the ground tacky. We were always going to turn up here, it was just unfortunate that the rain came. We were game to go and had to give it our best go. Poetic Flare has lost nothing in defeat. He loves his racing, loves his work. He's an easy horse to deal with and to travel. Bringing him over here wasn't going to be any sort of disadvantage to him, even if the ground didn't turn out like he wanted.”

Kevin Manning added “It was the same as in Paris. I was riding Poetic Flare a little bit behind the bridle from a long way down, whereas on good ground he is travelling into his races. I think the ground has just blunted him for speed. It is tacky, holding ground and there is no bounce in it. Poetic Flare has dug very deep and I thought for a few strides when Alcohol Free came by that he would shunt her back. He's won a 2000 Guineas and St James's Palace on good to quick ground. The runs that he hasn't lived up to have both come on soft ground.”

Snow Lantern stayed on from behind once again and jockey Jamie Spencer suggested that a step up in trip could suit. “The pace was only just okay,” he said. “When they quickened at the three, I was caught a little flat-footed, but I hit the line very strong. Further won't be a problem.”

Alcohol Free, who was completing an afternoon group double for her sire after Armor (GB) had taken the Molecomb, is a daughter of Plying (Hard Spun) who also produced the Listed Prix le Fabuleux scorer Alexander James (Ire) (Camelot {GB}). The second dam is the Listed National S.-placed Nasaieb (Ire) (Fairy King), who is also responsible for the G2 Flying Childers S. and G3 Princess Margaret S. third Kissing Lights (Ire) Machiavellian) and is a half-sister to the G3 Solario S. scorer Raise a Grand (Ire) (Grand Lodge). From the family of the champion juvenile Numbered Account (Buckpasser), Plying's unraced 2-year-old filly Hooked On You (Ire) (Starspangledbanner {Aus}) was a 130,000gns purchase by Creighton Schwartz Bloodstock at the Tattersalls December Yearling Sale and is owned by John and Jess Dance in training with Karl Burke. Her yearling colt by Dandy Man (Ire) was bought by Ballyhane for €80,000 at the Goffs November Foal Sale.