Big Day at the Office for Hamm Friday 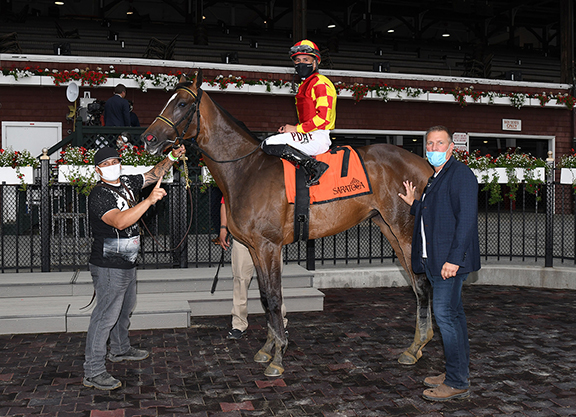 With more than 1300 wins and $30 million in career earnings, a training center in Florida and a breeding operation in Ohio, Tim Hamm has already done plenty to prove his skills as a horseman and businessman. But on Friday, he'll get a chance to showcase his program on the biggest stage when he sends out unbeaten and more or less untested Dayoutoftheoffice (Into Mischief) to take on the household barns in the GI Juvenile Fillies. It will be his first runner, as a trainer at least, in the World Championships.

Like many conditioners, the Ohio native grew up around horses–he had experience with Saddlebreds and Standardbreds, and his parents owned an Arabian farm. His father, who worked for General Motors, trained horses off the family's farm and shipped them in to race at Mountaineer.

Hamm attended Youngstown State and earned a bachelor's degree in business before immediately starting his own construction company upon graduation. Business must have been pretty good, as a few years into his construction career, Hamm ventured down to Ocala to shop the 1994 OBS April sale.

He purchased a Pennsylvania-bred filly by Proof for $13,500 and, after someone explained to him what her state-bred status meant, Hamm pointed his purchase towards a debut at Philadelphia Park that July. Named Willowy Proof, Hamm's filly romped by 9 1/4 lengths in that initial outing.

“I was coming off the track, and the breeder approached me and asked if she was for sale. I said 'No, I'm just kind of fiddling around here,'” Hamm recalled. “But they offered me $100,000. At that time, I didn't realize that when they ran big you could make some money selling them. So, that spurred the thought that maybe I could make a business out of this. It was either beginner's luck or not that hard–now I know it was beginner's luck.”

Hamm went back to Ocala the following year and purchased four more horses, who he says all became stakes winners. He also bought a farm in nearby Williston around that time, and while he's added and subtracted to that property over the years, the majority of Hamm's runners since 1995 have gotten their start at that facility.

He's been to the Breeders' Cup before as an owner with flashy Ohio-bred Too Much Bling, who he sent out to a 19 1/2-length maiden-breaking score at Thistledown in 2005. Stonerside Stable subsequently purchased a majority interest in the colt and turned him over to Bob Baffert, for whom he took a trio of graded stakes before finishing sixth in the 2006 GI Breeders' Cup Sprint.

A significant part of his business comes from partnering with large commercial breeders. He has a close relationship with WinStar Farm, co-breeding and campaigning Ohio-breds together and standing the stallion National Flag at Blazing Meadows Ohio as WinBlaze. Hamm has also teamed up in recent years with the likes of Three Chimneys Farm, for whom his brother Tom is Director of Stallion Seasons, and Breeders' Cup chairman Fred Hertrich III and John Fielding. Three Chimneys and Blazing Meadows race last year's two-time Woodbine stakes winner Fast Scene (Fast Anna) together.

“They're on an individual basis–some of them are on deals, some we partner on and some are from conception,” Hamm said when asked about the structure of his partnerships. “Most of the WinStar horses are ones we're breeding together. Each horse is different, how it's structured. Historically, what we started doing years ago, if they had one they really liked but maybe the sire wasn't that hot or maybe there was a blip on the X-rays that might not hurt them to race but would hurt them at a yearling sale; or maybe their conformation wasn't up to what would pass at a yearling sale to really get much, we took a lot of those [on deals] and we still do some of those.”

“In our first experience with Siena, they gave me a Lonhro filly who was really crooked, not real big, but I took her and they called me a week later and said, 'You know, we feel like we're not giving you much of a shot with that filly. If you're going to invest this time and money, we're going to throw in this Ghostzapper colt–a more attractive horse,'” Hamm said. “It ended up that the Lonhro filly won her first three, including a stake at Woodbine and we sold her for pretty good money. The colt turned out to be a dud, but that's how we get started with Siena.”

Hamm said he took an equity position in Dayoutoftheoffice in exchange for training her, and it didn't take him long to figure out he had gotten a good one.

“It was probably late January or February,” Hamm said when asked when he first knew Dayoutoftheoffice was a runner. “There were three fillies who really stood out in our crop, and sure enough all three ended up really being runners. We always thought she was the best of the three based on the fact that she had a lot of size and scope along with being very athletic. The other two were [eventual Ohio-bred multiple stakes winners] Alexandria (Constitution) and Esplanande (Daredevil). Esplanade was second in the GI Spinaway S. to the filly who was second in the Frizette, and Alexandria was third in the GIII Pocahontas S. You can identify them pretty early, but what you can't control is injury and sickness and all that.”

Dayoutoftheoffice got an early start to her career when she scored by 4 3/4 lengths at Gulfstream May 14. She was dismissed at almost 20-1 in Saratoga's GIII Schuylerville S. two months later, but took another leap forward to air by six lengths.

“I was fairly confident that she would run very well [in the Schylerville]–whether she would win it or not, I think all those fillies that have just broken their maiden and are going into graded stakes at Saratoga for the first time, you really don't know how they're going to react when they meet the next level of horse,” Hamm said. “I was very skeptical about running her

4 1/2 furlongs at Gulfstream, but she was ready, and I didn't want to keep training on her and waiting so we figured we'd get a race in her and see how she did. I knew she had a lot of ability early, and I guess she answered the question as to whether she could up her level.”

With the Breeders' Cup circled on the calendar for quite some time now, Hamm has kept Dayoutoftheoffice's races well spaced out. She didn't make a start between the July 16 Schuylerville and Oct. 10 GI Frizette S. at Belmont, while posting seven drills back and forth between Thistledown and Belterra Park in the interim.

“When you start these horses in May, and she'd been in training since at least Oct. 1 [of 2019], we'd done a lot of 2-year-olds over the years and if you just drill them and drill them and don't give them a little break, I just don't see them lasting,” Hamm said. “We knew we had a horse who could possibly make the Breeders' Cup, so we tried to space it so that would be a viable option if she proved to have the ability. We were slightly worried she would be short for the Frizette–she hadn't run in 80-something days–but her last two works heading into the Frizette were pretty good. We thought she had a heck of a chance to be tight enough, and if we came out of there, we'd have a really fresh and good horse going into the Breeders' Cup.”

Dayoutoftheoffice proved plenty fit for the next step, and bested GI Spinaway S. romper Vequist (Nyquist) by two lengths at Belmont with a chasm of 10 1/4 lengths back to third.

“I thought it was outstanding,” said Hamm. “Watching the race, it looked like she was in control of it the whole time. She never made me question if she was going to get it done. She just looked in command from the start.”

Dayoutoftheoffice is one of four unbeaten fillies set to square off in the Juvenile, along with pricey three-for-three Baffert trainee and 'TDN Rising Star' Princess Noor (Not This Time) expected to go favored; Ken McPeek-conditioned Simply Ravishing (Laoban) coming off a 6 1/4-length score in the GI Darley Alcibiades S. that was so impressive it played a major role in bringing her freshman sire from New York to Kentucky for 2021; and $500,000 yearling and 'Rising Star' Girl Daddy (Uncle Mo), last seen taking the Sept. 3 GIII Pocahontas S. by daylight for Dale Romans and the Albaugh Family Stable.

“Probably because I'm not Baffert or McPeek and I haven't been to the Breeders' Cup before,” Hamm said matter-of-factly when asked about the seemingly underdog status of a filly with as impressive a set of past performances as Dayoutoftheoffice's and who also happens to be by the world's hottest stallion. “There's no other reason.”

Hamm said he has been excited to see his charge race around two turns all summer, and he called her 1:00.40 breeze in the Keeneland mud last Friday “her best work.” Now it's time to see what she, and he, can do against the big guns.

“It's big for our whole operation–we've got the training center in Ocala, the breeding farm in Ohio. The thing that means the most to us is that it lets you know that you can get there,” Hamm said. “We hope that gets contagious. Sometimes the hardest thing is getting there, and sometimes you never get back there. We're hoping that this won't be the last time, and you realize it's not an impossible dream you're chasing–that it's attainable. We're hoping that our people kind of all buy in a little harder and stay on board, and it's the same with our clients. It shows our clients that if we've got the right horse, we can get there. And hopefully it'll allow us to keep building stronger relationships with them.”