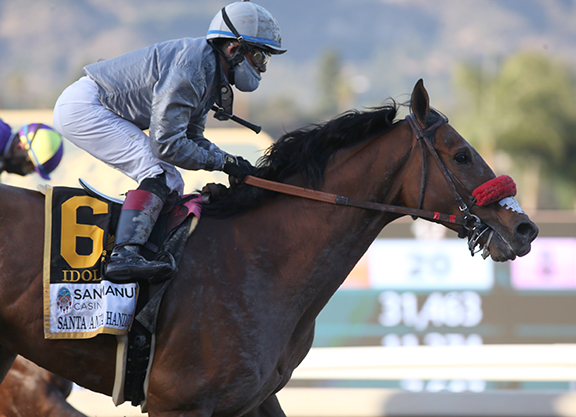 In the fall of 2018, Torie and Jimbo Gladwell, owners of the Ocala-based Top Line Sales, welcomed into their training program a colt by Curlin out of the stakes-winning Marion Ravenwood (A.P. Indy). Some 2 1/2 years later, the bay colt–now named Idol–is a Grade I winner, having flown home down the center of the track to take out the prestigious Santa Anita H. Mar. 6. The victory was the second leg of a unique triple for Top Line graduates over the last few weeks.

Idol was bred by Len Riggio's My Meadowview Farm and is out of a daughter of GSW & MGISP Andujar (Quiet American), who was acquired by My Meadowview for $2.5 million at the Fasig-Tipton November Sale in 2006. Denali Stud sold Idol for $375,000 at the 2018 Keeneland September Sale.

“He was very babyish when we got him,” said Torie Gladwell. “He was definitely going to need some time to mature and to fill out. Other than that, he was super smart and took everything in stride. He trained really, really well–the couple of breezes that we got into him, we were pretty high on the colt, and we were actually hoping we would be able to sell him as a 2-year-old at one of the later sales just to give him some time.

She continued, “While we had him, he was really laid back, just more of a two-turn type horse. Pretty good size, but didn't have that big muscle just hanging off of him like some of these horses that we buy for the 2-year-old sales. You could tell he was an immature, leaner-made type of horse than what we would normally go buy for ourselves. Curlin was going so well, so we knew when this guy came in that he'd be one to watch.”

Acquired privately by David Meah for his client Calvin Nguyen, Idol was something of a work in progress. Debuting with a runner-up effort on the GI Kentucky Derby undercard Sept. 5, he graduated smartly over seven furlongs three weeks later, then added a 9 1/2-furlong allowance by 5 3/4 lengths in new track-record time of 1:55.97. Second and running on in the Dec. 26 GII San Antonio S., Idol was third to Express Train (Union Rags) in the GII San Pasqual S. Jan. 30 and benefitted from a jockey change to Joel Rosario to reverse form in the Big 'Cap (see below).

“They did right by the horse and the horse has done right by them,” Gladwell said. “They gave him a little time, which is what he needed, and he's shown up ever since. He's turned into a really nice horse. We're happy for all the connections.”

“He breezed really well for us at Gulfstream and we tried to get so many different people to buy him, but he ended up having a couple of issues that kept him from staying here,” she said. “They have done a fantastic job training the horse. The Japanese know Top Line because of Copano and it's great.”

A three-time winner at group level on the dirt in Japan, Copano Kicking was snapping a five-race losing streak in the $1.5-million Riyadh Dirt Sprint.

“I am just glad the connections decided to take him out there,” Gladwell said. “I really didn't think he had a shot of winning that race, because I wasn't sure his form was back to what it was when he was winning all those races in Japan. I was very proud of him that he ran as big as he ran.”

Copano Kicking makes his next start in the G1 Dubai Golden Shaheen at Meydan Mar. 27.

About seven hours after Idol gave Top Line its second Grade I-winning graduate (No Parole was their first), the Torie Gladwell-bred Chancheng Prince (Carpe Diem) proved victorious at Sha Tin Racecourse in Hong Kong (video). The Class 3 handicap paled in importance, but was no less thrilling for Gladwell.

“I bred that horse with my mom [in the name of Mystic Bloodstock] and when I bring my homebreds over to the 2-year-old sales, I get pretty attached to them,” she said. “When he in particular sold, I was devastated that he sold to Hong Kong. I didn't know anything about Hong Kong racing at the time. The underbidder was Dennis O'Neill and I was really excited that he might be going out to California and that Doug O'Neill was going to get him.

She added, “I was in the back ring and I saw Dennis bidding on the horse and the hammer dropped inside the ring. I go running around there to see who bought him and it was a gentleman I didn't recognize. My husband went up to him to say 'thank you,' came back and said he was going to Hong Kong and I just broke down in tears. I was so upset. I left the sale, but I am just so glad that it's worked out and that he's done so well over there.”

Chancheng Prince, a $150,000 purchase out of the 2019 OBS April Sale, now has a record of 3-2-2 from 10 starts and earnings of $338,571. Gladwell said the yearling half-sister to Chancheng Prince by Mastery “looks really fast” and is likely to be pointed to next year's breeze-up sales.

The Gladwells are looking forward to the beginning of this year's under-tack sales next week at OBS.

“I think it's going to be a good market,” Gladwell said. “[Wednesday], the day before the first breeze show, I am seeing a lot of new faces and the people are there doing their homework pre-breeze day. I don't know what kind of budget the agents are going to be on, whether they have big orders or small orders or if owners are cutting back, I really haven't heard that yet. The only thing that is going to affect the sales this year is the lack of the Korean buyers, but they don't buy too many out of March, so you won't see that impact until the April and Maryland sales.”

Top Line consigns 16 to OBS March, a half-dozen to Fasig-Tipton Florida Mar. 31 and about 50 head for OBS April.