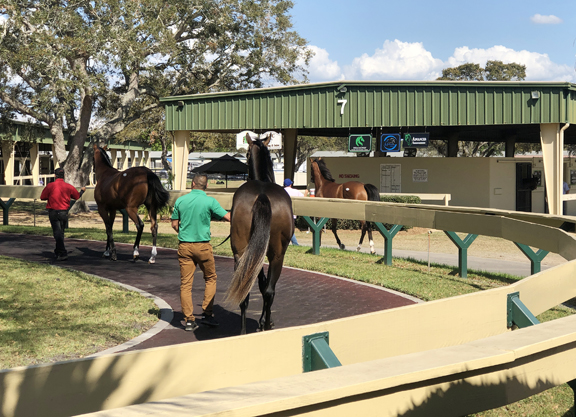 The juvenile sales season, which has suffered cancellations, delays and reshuffling due to the coronavirus pandemic, will look to get back on track with the Ocala Breeders' Sales Company's Spring Sale of 2-Year-Olds in Training which begins its four-day run in Central Florida Tuesday morning.

“I would say we are cautiously optimistic about the sale in light of what we've all had to deal with in the last few months,” said OBS Director of Sales Tod Wojciechowski. “I think the most important thing is that people are happy just to be able to have a sale.”

OBS staged the only 2-year-old sale of the season so far with its two-day March sale held just as the world was heading into lockdown and with the stock market in a free fall. All the uncertainties led to a steep downturn in business at the auction, with the average falling 34%, the median down 38%, and the buy-back rate at the close of the sale's second session standing at 40%.

The OBS Spring sale has set records for gross, average and median during its last three renewals and, while those lofty results may be out of reach this year, consignors have some reason for hope with a tentative return to a level normalcy and racing resuming, albeit without spectators, at most racetracks across the globe.

“I'm not quite sure what to expect,” admitted consignor Tom McCrocklin. “My general impression is that it's going to be top heavy. We are showing the same horses over and over and then we have horses who are getting no attention at all. The market was kind of going that way, but I think it's an exaggerated version of what we already had. I think anybody that was kind of a marginal owner/buyer before is probably out. And the guys that are in game are in the game to stay. I think everybody has this idea that sellers are desperate and there is a 'we are going to steal your horse mentality,' but I don't think that's the case here and I don't think that's the case in a lot of places. We always want to sell horses, but we're not looking to get beat over the head.”

The Spring sale's under-tack show which tiptoed through heavy rainstorms throughout the last week, concluded Saturday and Sunday's first full day of showing was hampered by yet more rainfall, but activity has been steadily building at the sales barns.

“To this point we've seen mostly agents-the game has kind of been gravitating that way anyway, but we are seeing some end users show up this morning,” McCrocklin said. “The more the better. It's also rained a lot, so we are dealing with that too. We are seeing more and more people and particularly today we've seen some new faces, so hopefully it will be a snowball effect here.”

A deep buying bench of international players has been a staple of the Spring sale in recent years, but that global participation may be tempered this year.

To facilitate bidding for people unable to attend the auction, OBS has introduced the option to bid online.

“The online bidding is going to be kind of a whole new world for the industry with the live bidding component,” Wojciechowski said. “We have been pleased with the response that we've received for registration for online bidding. We think that this can be a very helpful tool, not only for this sale, but for our future sales as well.”

The Spring sale originally featured a catalogue of 1231 juveniles, but a further 79-many of whom had been targeted for Fasig-Tipton's canceled boutique Gulfstream sale-have been added to a supplemental catalogue. The end result is one of the deepest catalogues in the auction's history.

“It's a very good group of horses,” Wojciechowski said. “There are loads of really good horses all over the grounds.”

During the seven-session under tack show, a filly by Into Mischief (hip 429) turned in the fastest furlong work of :9 3/5 and 15 juveniles shared the second fastest time of :9 4/5. A filly by freshman sire Not This Time (hip 1254) turned in the fastest quarter-mile work of :20 1/5. Two colts shared the show's second fastest quarter-mile time of :20 2/5.

“The breeze show went great,” Wojciechowski said. “We were very fortunate. We hit some weather windows that we, quite frankly, didn't know that we would be able to hit. The last day, unfortunately, some of the horses had to contend with a little more rain than other days. But all in all, we were really fortunate to get all seven days off without some sort of delay.”