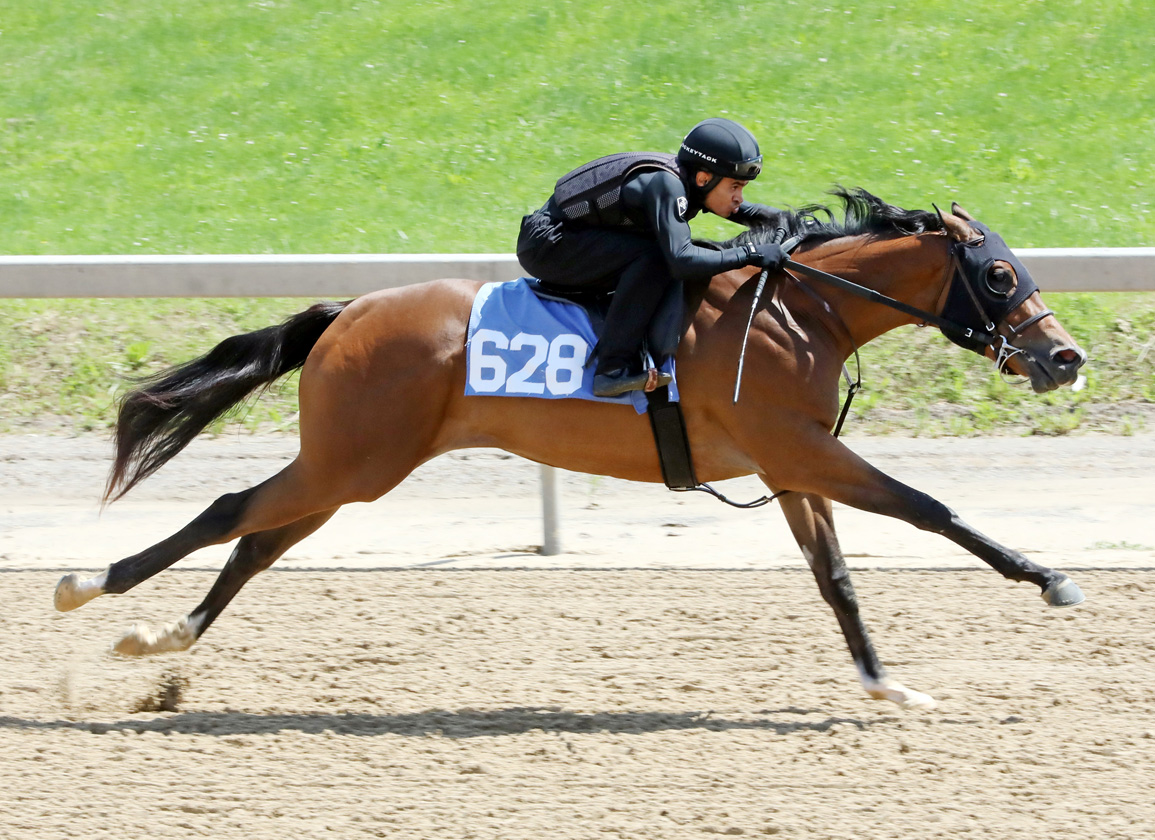 TIMONIUM, MD – The final session of the Fasig-Tipton Midlantic 2-Year-Olds in Training Sale under-tack show, delayed an hour by overnight rains, concluded with 11 juveniles sharing the fastest furlong time of :10 flat, while a filly by Violence turned in the day's fastest quarter-mile work of :21 1/5 Thursday in Timonium.

The Top Line Sales consignment was responsible for three of the furlong bullet workers Thursday, including a pair of fillies by freshman sire Sharp Azteca. A filly by Speightster (hip 484) was first to hit the :10 flat mark for the Gladwells' consignment when working in the day's second set. Out of Little Miss Brown (Big Brown), the chestnut filly was acquired for $35,000 at last year's Fasig-Tipton Midlantic Fall Yearlings Sale.

“My sister [Nelly Breeden] and Omar [Ramirez] came up here and bought her together out of the Fasig-Tipton sale as a yearling,” Jimbo Gladwell said of hip 484. “She has been phenomenal all year. She is really fast. We knew she was going to work good, it was just a matter of getting her up there and getting her through it.”

Both Sharp Azteca fillies were representing long-time members of the Top Line team. Larry Mejias purchased hip 628 for $20,000 at last year's Fasig-Tipton Midlantic Fall sale and the rider, who also counts Kevin McKathan and Dave Scanlon among his clients at the breeze show, was aboard the filly when she turned in her :10 flat work Thursday.

“There were a lot of nerves going up there,” Gladwell admitted. “Me on the pony, him on the horse. We had three or four plans and we just tried to keep it simple. Don't overrride, let the horse do the work.”

The filly is out of Roxie Dancer (Successful Appeal), a half-sister to graded winner Declan's Warrior (Majestic Warrior).

“Both of the Sharp Aztecas are owned by guys that work for me,” Gladwell said. “I'm proud of them and happy to come up here and they have some success and their horses are working well for them.”

Of the first crop juveniles by GI Cigar Mile H. winner Sharp Azteca that he has worked with, Gladwell said, “They are very pretty horses and they seem willing. I think he's going to be ok.”

As the breeze show was winding down Thursday, Gladwell said, “We had a great day. Horses are breezing to their preps just like they are supposed to. We had high expectations for today, we had a lot of fast horses, it just worked out, on the last day.”

Asked if the overnight rains had effected the track, Gladwell said, “I don't think so. It was a little sloppy earlier, but Fasig did a good job of putting the brakes on and giving the track an extra hour for the crew to work on it and get it right. And it was on the faster side, but I don't think it changed from the other two days, just from the horses' prep times from last week and how they are moving forward. It's pretty much the same as my other horses that breezed on the other days.”

Kevin McKathan is doing double duty this week in Maryland. In addition to overseeing his McKathan Bros. Sales consignment, he has also been busy across town preparing Fenwick (Curlin) for Saturday's GI Preakness S. The Ocala horseman sent out a pair of bullet workers Thursday. Hip 537, a daughter of Cairo Prince, turned in her :10 flat work during the day's second set. She is out of the unraced Mother of Swords (War Front) and was purchased by Fenwick's co-owner Jeremiah Rudan for $50,000 at the 2020 Keeneland November sale. She RNA'd for $100,000 at Keeneland last September and was originally expected to be offered at this year's OBS March sale.

“She is a big, beautiful, stretchy filly,” McKathan said of the juvenile. “I had her in an earlier sale and she ended up getting a little shin before the breeze show, so I scratched her and pinfired her and brought her here. She is a big, sexy filly. Everyone should love her. She's for the guy I have Fenwick for in the Preakness, so it could be a big weekend for him.”

McKathan also sent out a filly by American Pharoah (hip 443) to work in :10 flat. He is consigning the filly, who is out of graded stakes winner Jordan's Henny (Henny Hughes), on behalf of breeders Erv Woolsey and Ralph Kinder. The juvenile will be making her second appearance in a sales ring next week after RNA'ing for $290,000 following a :10 1/5 work at OBS March.