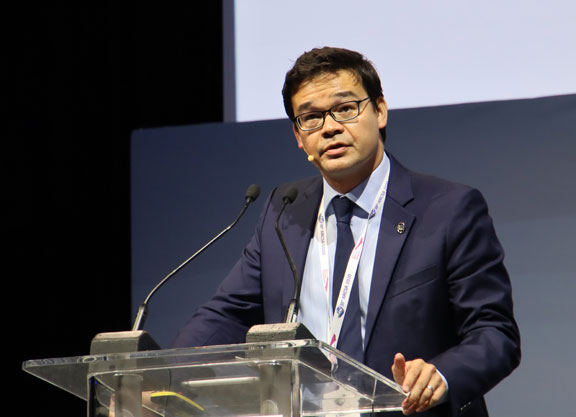 The combat of illegal betting was a key theme during the first session of panels at the Asian Racing Conference in Cape Town on Wednesday.

Douglas Robinson, senior due diligence and research manager for the Hong Kong Jockey Club and deputy chairman of the Asian Racing Federation Anti-Illegal Betting Taskforce, said racing “faces a war against a rampant illegal betting market” and stressed the need for racing regulators to build relationships with governments to combat the problem.

The ARF's Anti-Illegal Betting Taskforce was set up in 2016 and comprises 14 members, and Robinson cited evidence from Hong Kong, Australia, New Zealand, South Africa, South Korea and Singapore to show that “illegal markets across the six territories are large–often larger than regulated markets–and expanding faster than regulated markets.

“Illegal markets are also associated with criminality such as loan sharking and money laundering and they also have a comparatively larger negative social impact on customers than regulated operators.”

Robinson said it is essential to show governments “how and why illegal betting has a larger negative impact than legalised betting and that it causes widespread social issues,” in order to gain their support in tackling the problem.

“The scale of illegal betting is now so huge, and its operations spread across so many different countries, that horse racing and sports organisations alone cannot effectively combat the threat,” he said. “Instead, sports must now engage with multiple stakeholders and at the top of this pile are governments, primarily because they control and direct policy.”

“I believe international commingling will be key for future development of racing as a global sport and through this concept we have the chance to really harvest the potential of our international racing,” he said.

“The commingling development in Hong Kong is an astonishing success and we are seeing in the 2019-2020 season that it has gone up to around 20% of turnover,” he said. “Riding on that success, with our partners at Ascot and Totepool, we created a new dimension to commingling with the first global pool at Royal Ascot which enabled people around the world to make use of huge liquidity and led to a 60% increase in turnover.”

The growth of commingled betting has brought with it opportunities to expand offerings of exotic bets and returns for customers.

“With new protocols available we can create a racing bet type that is attractive to customers who look for higher returns–and even Lottery-like returns–while retaining the skill-based differentiation which is important in racing,” Engelbrecht-Bresges said.

Thursday's session of the Asian Racing Conference featured the fourth International Forum for the Aftercare of Racehorses, which featured presentations from four jurisdictions on the advancement of their welfare practices. Representatives from South Africa detailed how the National Horseracing Authority of Southern Africa has written new rules that make owners responsible for the welfare of racehorses throughout their lives, and rules are also being drafted to increase traceability through increased regulation of private auctions and sales.

The Japan Racing Association has launched a program that provides financial resources to farms that take care of retired racehorses and organizations that work to promote second careers for former racehorses, like the U.S.'s Thoroughbred Aftercare Alliance and the UK's Retraining of Racehorses.

At an international stewards' conference earlier this week in advance of the ARC, Henri Pouret–Deputy Director General of Racing Operations for France Galop–revealed that the adoption of Category 1 stewarding rules in France has led to a reduction in dangerous riding charges against jockeys.

In its second year operating under its new rules, dangerous riding charges decreased by 35%. France was one of the two final major racing jurisdictions in Europe-and was subsequently followed by Germany-to make the change from Category 2 to Category 1.

For fear that the shift in rules would lead to a more dangerous riding culture, France lobbied the International Federation of Horseracing Authorities to add a clause to the rules to give stewards authority in the event of dangerous riding. They succeeded in that.

“The number of dangerous riding charges in France decreased from 29 in our first year under Category 1 to 19 in 2019,” Pouret said. “There were a few high-profile charges early after adoption and jockeys took notice. It has clearly had a deterrent effect.

“The overall number of inquiries did not drop as much as you see [in jurisdictions that have had Category 1 for far longer], but that has been somewhat deliberate. Stewards are making it known they saw something and are reviewing it, but the number of relegations is down considerably.”

“If our feedback channels are any guide, it is clear customers prefer fewer relegations,” said Pouret. “Any time there is some element of interference, someone always feels harmed, but our customers have made it quite clear they have embraced the new system. In an annual survey conducted by French betting operator Pari-Mutuel Urbain (PMU), we received a total of two complaints in two years about questionable decisions. It was many, many more under Category 2.”