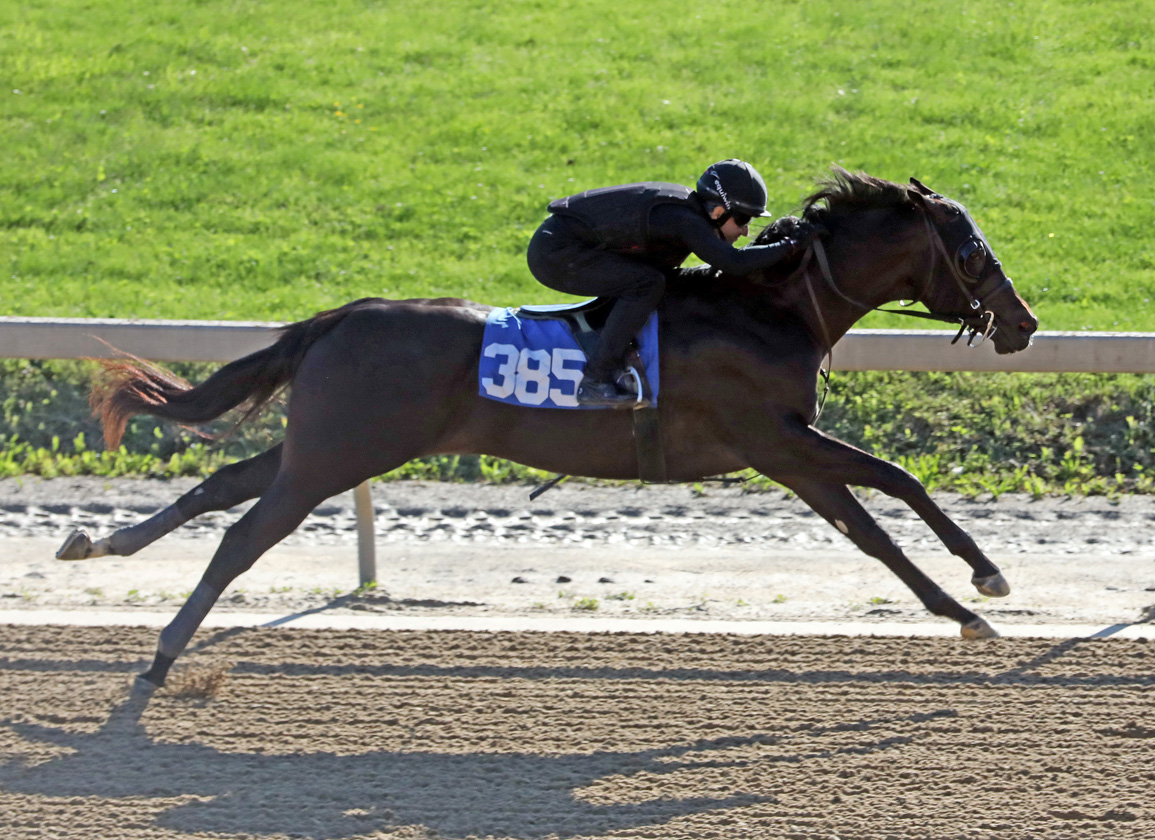 TIMONIUM, MD –  Just minutes into the second day of the Fasig-Tipton Midlantic 2-Year-Olds in Training Sale under-tack show, a colt by Bernardini (hip 385) zipped the week's fastest furlong work of :9 4/5 Wednesday in Timonium. It was the first time since 2012 that a juvenile had shaded :10 at the Maryland State Fairgrounds oval. The dark bay colt is consigned to the Midlantic sale by Becky Thomas's Sequel Bloodstock on behalf of breeders Chester and Mary Broman.

“The expectations were pretty high,” said Sequel's Carlos Manresa. “Like most of Mr. Broman's horses, they are bred to go fast. And he did just that. We didn't know that he was going to go quite that fast. We hadn't asked him to go that fast, but we knew that he would be a standout performer.”

The colt is out of G Note (Medaglia d'Oro), a daughter of graded stakes winner Seeking the Ante (Seeking the Gold) and a half to stakes winner Mineralogist (Mineshaft), as well as stakes-placed Risk a Chance (A.P. Indy), who is the dam of this year's GII Rebel S. winner Un Ojo (Laoban).

Thomas's association with the Bromans' families goes back generations.

“We have three relatives of that family,” Thomas said. “The mother of Un Ojo was Mr. Broman's and we sold her to another partner of ours. And now, in Mr. Broman's breeding band, we have the aunts, Mineralogist and Ante Up My Friend (Friend or Foe), and we have G Note. We have many members and we breed them all really well. So one of them will fill in that gap up there.”

The Munoz family's CM Thoroughbreds is making its debut at the Timonium auction with a three-horse consignment this year and one of the trio, a colt by American Freedom (hip 236), turned in Wednesday's fastest quarter-mile work of :21 2/5. Anna and Adela Munoz purchased the dark bay, who is out of Bringingdown Babel (Roman Ruler), for $12,000 at last year's OBS October sale.

“We liked the way he looked, he had a big body on him,” said Damian Munoz, who is overseeing the consignment on behalf of his father, Carlos. “We tried to enter him at the OBS sale in April, but they had so many horses, so we decided to come here for the first time. This is our first time trying Timonium and so far, I am loving it here. I love the weather.”

Of Wednesday's bullet work, Munoz said, “I was expecting a fast breeze out of him, but not as fast as he did it. He got sick before he shipped over here, so he missed out on two workouts. So we had to get him sharp over here with two breezes and he wasn't breezing like what he did today. So I was a little surprised today.”

The Munozes, who generally race at Tampa Bay Downs, expanded their pinhooking venture this year and have been pleased with the results.

“We have been able to sell just about everything and make a profit out of it, so we've been doing pretty good,” Munoz said of the family's 2022 results.

CM Thoroughbreds had its first consignment at the Fasig-Tipton Gulfstream sale earlier in the year and will offer nine juveniles at the upcoming OBS June sale.

“It's all a family thing, with me, my mom and my dad,” Munoz explained.

The under-tack show concludes with a final session beginning at 8 a.m. Thursday. The auction will be held next Monday and Tuesday with bidding commencing each day at 11 a.m.