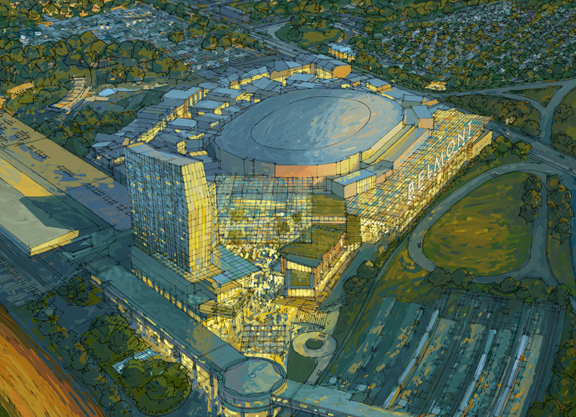 A Dec. 20 press conference to announce the winning bidder for the right to develop a sports complex on state-owned land surrounding Belmont Park made official the news that was leaked earlier this week: A $1-billion arena that will be the new home of the National Hockey League (NHL)'s New York Islanders is to be built adjacent to the far end of the historic track's grandstand near the Long Island Rail Road station.

The master plan also calls for a 435,000-square-foot retail hub, a hotel, and other amenities on a portion of a parking lot on the west side of the property.

Ground is expected to be broken for the arena in June 2018, with completion anticipated by 2020, officials said at a packed press event hosted by New York Gov. Andrew M. Cuomo in Belmont's Turf and Field Club.

New York Racing Association (NYRA) president and chief executive officer Chris Kay told TDN via phone shortly after the press conference that “this is a very significant and historic day for racing. Now racing at Belmont Park will be part of a sports and entertainment district like none other in the United States.”

But while Kay expressed optimism that the long-term ramifications of the project would spark a revitalization of Belmont Park that could include a much-needed overhaul to the facility (last modernized in 1968), his aspirations of dovetailing racing improvements with the development were not acknowledged publicly by the governor, local officials, and NHL executives who spoke at the press event.

Gov. Cuomo, most notably, did not even utter the words “horse racing” once during his time at the podium.

This did not seem to concern leaders in the New York racing community, who acknowledged the omission but expressed confidence that a partnership mentality would evolve in step with the arena and entertainment district development.

“Well, today was a day about the New York Islanders. So I understand why the entire focus of the day was on the Islanders, this new arena, and what other things that can happen at the arena,” Kay said. “But we've spoken to the governor before…and I think the governor believes in what NYRA is doing because he supported the effort to return NYRA to private control in April of this year.

“So the fact that there was no mention today of horse racing doesn't change…the commitments he's demonstrated in the past, and I'm optimistic that will be the case in the future,” Kay continued. “Now that he's identified the Islanders as our neighbor and our partner, I believe future analysis will focus on all of us collectively working together.”

Joe Appelbaum, elected two weeks ago as the president of the New York Thoroughbred Horsemen's Association, said via phone after leaving the event that “I don't want to get hung up on how many mentions [there were of horse racing] or throw a damper on the Islanders' day.

“But having said that,” Appelbaum continued, “our interest, of course, is horse racing. So is NYRA's, and we're going to work real hard to make sure we're protected, and that things go well for us. I will say that the horsemen in general are eager to see Belmont redeveloped to make the venue more moderns and more amenable to 21st Century sports, gaming, and entertainment consumers.”

The winning bid was submitted by New York Arena Partners, a development team that includes the owners of the Islanders and owners of the New York Mets Major League Baseball team.

Kay said the original request for proposal, issued by the state in July, specifically asked for “organizations interested in creating a sports and entertainment district at Belmont Park in conjunction with and in an effort to enhance Thoroughbred horse racing.”

The New York City Football Club, which is the Major League Soccer Team that currently plays in Yankee Stadium, submitted a losing bid.

Yonkers Raceway, the harness track located about 22 miles northwest of Belmont Park, has also been mentioned with respect to future development at Belmont, because Yonkers' operators are said to be considering moving their racetrack somewhere else as they ponder expanding the Empire City Casino (where the harness oval is currently located).

Kay said it's too early in the process to know what specific construction issues might be of concern to horsemen who race and train at Belmont. He added that the site must still undergo an environmental review before any development begins.

“The construction of the arena is going to be south of the track and in part behind the existing grandstand, so I hope their concerns will be minimal,” Kay said.

Appelbaum added, “Our chief concern, and it's a theoretical concern at this point, would be the uninterrupted flow of racing and training at Belmont. We have thousands of horses on the facility, hundreds if not thousands of people working there already, and it's the core training facility in the state.”

In a Q&A interview that ran in the Wednesday edition of the TDN, Kay touched on grand ideas relating to the long-term refurbishment of Belmont Park, especially in light of the potential that downstate racing might someday be consolidated at Belmont if Aqueduct Racetrack is developed for another purpose.

Those wide-ranging aspirations include upgrading the paddock and backyard areas, retooling the racing surfaces, adding lights for night racing, and a complete renovation of the clubhouse, including the addition of heat and air conditioning. (Gary Bettman, the NHL commissioner, even made a crack at the Wednesday press conference about it being cold enough inside Belmont to make ice.)

But when asked by the TDN if there is a timetable for those large-scale Belmont projects, Kay said, “No, there is not. There is a process instead.”

In fact, Kay acknowledged, NYRA is right now only “in the midst” of creating extensive renovation plans for Belmont.

“Then, when you have the final idea, you have to ask yourself 'How much will it cost?' And then you have to go through the analysis of 'Can we get that kind of money?'” Kay explained.

“Then, in light of the fact that we're on state land, we have to A) submit it to our board, and then B) submit it to the franchise oversight board. And if those approvals take place, then we have to go to the state and obtain building permits,” Kay continued. “All of that has to happen before the first shovels are put into the ground.

“So I can't give you a timetable because there are so many moving parts in this process,” Kay summed up. “I can only tell you we've done work on it, we'll continue to do work on it, and we're committed to making it happen.”

Appelbaum noted that one positive takeaway he got from the meeting is the pending development of year-round train service to the Belmont Park station.

“From a racing perspective, I think the key element will be what appeared to be a commitment to the resumption of Long Island Rail Road service,” Appelbaum said. “If we do have daily railroad service, which is more than we already have, that can only help.”