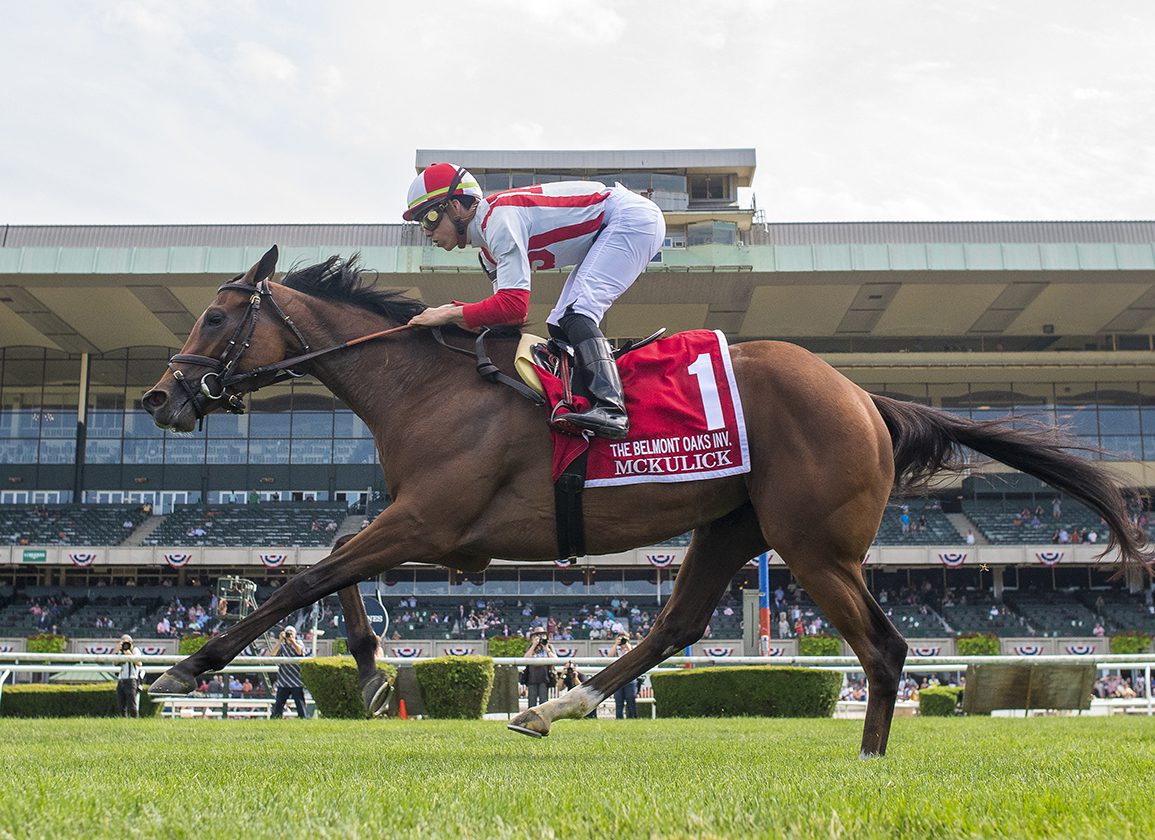 Highly-regarded McKulick (GB) (Frankel {GB}), named after trainer Chad Brown's first employee when he struck out on his own, was an impressive debut winner last summer at the Spa, but went winless in her next three starts while placing in the GII Miss Grillo S., GII Edgewood S. and GIII Regret S. Stretching out to 10 furlongs in the Belmont Oaks, the bay kicked clear strongly in deep stretch to earn a 1 3/4-length victory. The runner-up that day, Godolphin's With The Moonlight (Ire) (Frankel {GB}), has stayed in America for Charlie Appleby since and breezed four times in an 11-day span at Saratoga in preparation for her rematch with McKulick. William Buick, who rode the homebred to a 4 3/4-length romp in the Betfair Pretty Polly S. May 1 at Newmarket, takes the reins back from Frankie Dettori, who flew in for the ride last out.

“Hopefully, she'll settle a little more into the race,” Appleby's traveling assistant Chris Connett told the NYRA notes team. “She jumped real handy last time and just was a little bit on the muscle going into the first turn and might have done just a little too much, but she still ran hard. If she can reproduce that, she should be right there.”

Filling out the short but high-quality field are Walkathon (Twirling Candy), who most recently bested McKulick in the Regret to keep her turf record perfect at three-for-three, Contemporary Art (Dubawi {Ire}), a super impressive 4 1/2-length maiden victress June 17 at Belmont, New Year's Eve (Kitten's Joy), a 'TDN Rising Star' who took down McKulick in the Edgewood before finishing a non-factor eighth in the Belmont Oaks, and Oakhurst (Mr Speaker), a close second in the June 15 Wild Applause S. behind Eminent Victor (Mr. Z), who came back to just miss by a nose with a troubled trip in the local GIII Lake George S. July 22.

Earlier in the card, D. Wayne Lukas will have a significant favorite in the GIII Adirondack S. when he sends out Naughty Gal (Into Mischief), a 9 1/4-length second-out winner July 4 at Churchill. The $350,000 OBS March grad earned a 75 Beyer for that effort, while none of her five opponents have topped 64.

Out west, the GIII La Jolla H. will run as the feature in race five of an 11-race card at Del Mar, with Richard Mandella's streaking Sumter (War Front), winner of the Pasadena S. and Singletary S. earlier this year at Santa Anita, coming off a four-plus month layoff in a six-horse field that includes Armagnac (Quality Road), who will make his turf debut upon return to the Bob Baffert barn. The $210,000 Keeneland September buy was last seen setting the pace in the May 21 GI Preakness S. before retreating to finish seventh.