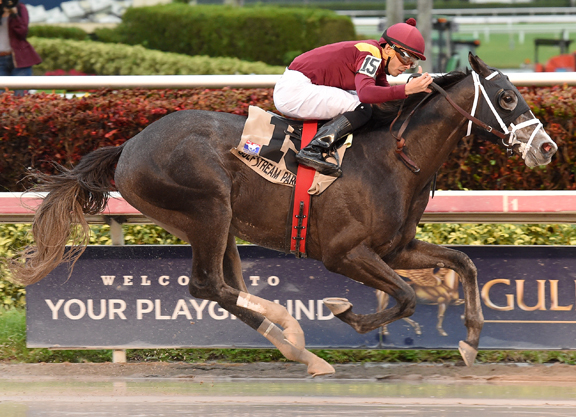 Albaugh Family Stable's J Boys Echo (Mineshaft) breezed five furlongs in 1:00.80 at Churchill Downs Saturday morning in advance of a possible tilt at the GI Belmont S. June 10. Accompanied by Tammy Fox, the bay went in company with stable companion Reedini (Bernardini) through splits of :11.80, :23.80 and :48.20 and galloped out in 1:14.

“It was a very solid work,” said trainer Dale Romans. “He was aggressive into the bit and that's exactly what we wanted to see.”

Winner in his second career start at Keeneland last October, J Boys Echo added a win in the GIII Gotham S. at Aqueduct Mar. 4. In his latest trip to post, he finished 15th in the GI Kentucky Derby May 6.

“It was good to see this type of move,” added Romans. “We wanted to see how he comes out of the breeze and then we'll make our decision on the Belmont and work out the logistics.”

Also eyeing starts in the Test of the Champion are Todd Pletcher representatives Tapwrit (Tapit) and Calumet Farm's Patch (Union Rags), who both worked Saturday morning over Belmont's training track.

“Tapwrit, we're definitely planning to run [in the Belmont],” confirmed Pletcher Saturday. “As for Patch, we'll wait and see how he works next week.”

Campaigned by Bridlewood Farm, Eclipse Thoroughbreds and Bob LaPenta, the former–piloted by Jose Ortiz–breezed five furlongs in company with 2015 GIII Withers S. winner Far From Over (Blame). Sent trackward shortly after 9:30 a.m., the duo completed the task in 1:02.25 before galloping out in 1:16 2/5. Earlier in the morning at about 7:45 a.m., Patch–accompanied by Outplay (Bernardini)–worked four furlongs in :50.24 under John Velazquez.

“I thought Tapwrit worked well; he's not an overzealous workhorse, but we got a good solid five-eighths into him on what I'd describe as a relatively slow training track,” explained Pletcher. “I thought it served its purpose and he seemed to work as he normally does. Patch also worked fine. Neither horse are ones that over achieve in the mornings, but they have that solid, grinding style that could suit the Belmont.”

Winner of the Mar. 11 GII Tampa Bay Derby, Tapwrit also took the Pulpit S. at Gulfstream in December. In his latest start, the grey found plenty of trouble and still wound up sixth in the Kentucky Derby.

“I thought Tapwrit ran great in the Derby,” affirmed Pletcher. “Everyone talked about the trouble at the start for Classic Empire, but [Tapwrit] was the one that got clobbered first and it was a chain reaction from there. But I thought he closed pretty well and made a good account of himself. I think with a cleaner start, he would have hit the board.”

Patch scored second time out going a mile at Gulfstream in February before finishing runner up in the GII Louisiana Derby at the Fair Grounds Apr. 1. The one-eyed colt came home 14th after a troubled trip in the GI Kentucky Derby.

In addition to Patch, Calumet may also be represented by True Timber (Mineshaft) in the 1 1/2-mile Classic. Third in his latest start in the May 20 Sir Barton S. at Pimlico, True Timber will also be entered in the 8 1/2-furlong Easy Goer on the Belmont undercard.

“We're looking at the Belmont right now,” confirmed trainer Kiaran McLaughlin. “It's three weeks off the Sir Barton, but we're OK with that. No one really knows about the mile-and-a-half, but we'll find out on that day.”

On the board in both the GIII Jerome S. and GIII Withers S. earlier this season, the bay finished fourth in the Apr. 8 GII Wood Memorial prior to the Sir Barton.

McLaughlin added, “He'll just work a half-mile a week out and we'll go from there.”

Silverton Hill's Meantime (Shackleford), also on Belmont's worktab Saturday morning, breezed five furlongs in :59.98 in preparation for a possible tilt in the final jewel in the Triple Crown. Trained by Brian Lynch, the GIII Peter Pan S. runner up was joined by maiden Basic Hero (City Zip). The duo negotiated the opening three-eighths in :35 1/5 after which Meantime drew clear of his workmate. Ridden by Mike Luzzi, the chestnut galloped out six panels in 1:13.

“I saw what I wanted to see, it was a nice, comfortable work,” said Lynch. “Mike's body language was very relaxed, he just looked like a passenger. He didn't look like he had to ask him at any stage. I wanted to have someone following him a little bit, so he can get used to getting put under a bit of pressure. Mike said he was totally relaxed in the work and did it totally in hand. He did it well within himself.”

While remaining under consideration for the 1 1/2-mile Belmont, Lynch indicated that Meantime is also eligible for the Easy Goer S. on Belmont day.

“I'm not going to run in [the Belmont] just for the sake of running in it,” added Lynch. “We've got the Easy Goer that day too, so I want to be sure. His next work [Saturday] will really tell me. Up until then, I'm still on the fence.”

Offering a possibility for some representation from the West Coast, Gormley (Malibu Moon), winner of the Apr. 8 GI Santa Anita Derby, worked six furlongs in 1:14 flat at Santa Anita Saturday morning. Ridden by regular pilot Victor Espinoza, the Jerry and Ann Moss runner was ninth in the Kentucky Derby, but missed the Preakness.

Victorious in his first two career starts–including the GI Frontrunner S.–the bay added a win in the GIII Sham S. Jan. 7. The winner of four of seven career starts, Gormley has amassed earnings of $920,000 to date.