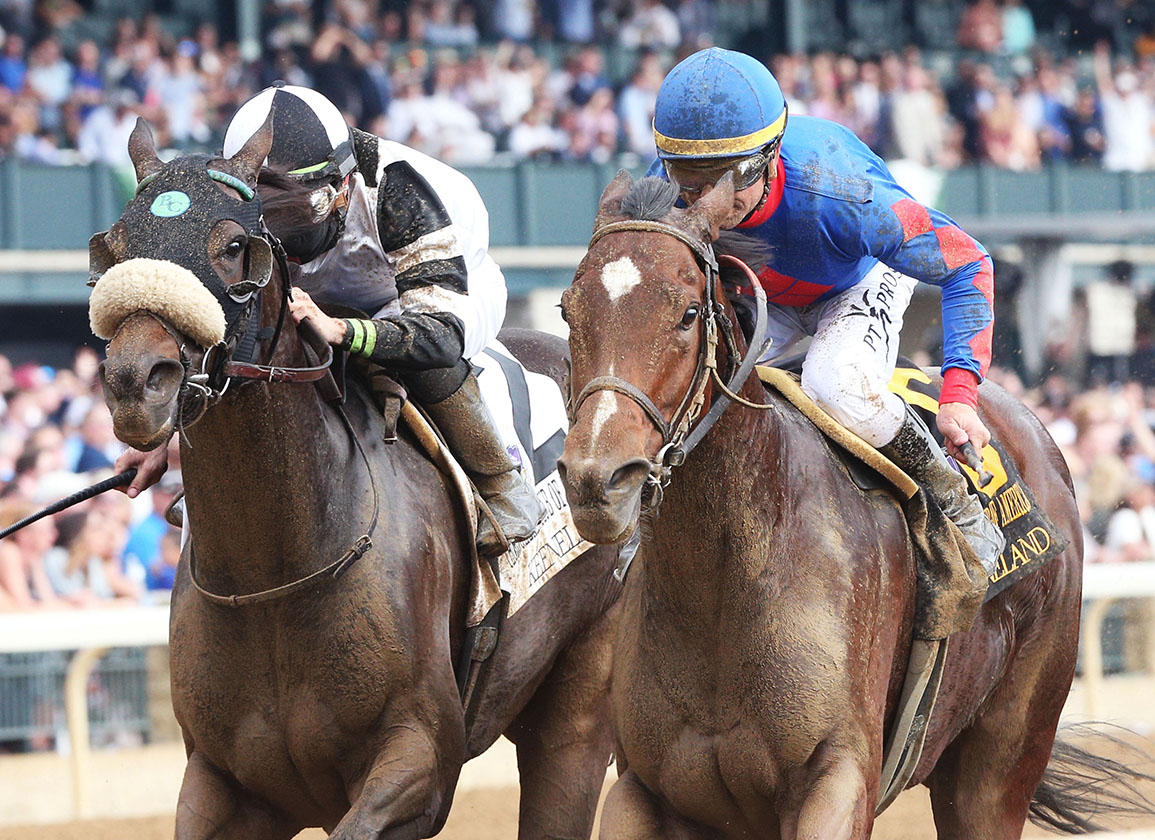 Bell's The One (inside) | Coady

Following a conversation with owner Robert Lothenbach of Lothenbach Stables, trainer Neil Pessin confirmed that his Grade I-winning mare Bell's The One (Majesticperfection) will not start in the GI Breeders' Cup Filly & Mare Sprint Nov. 6 and will instead make her final start of the season in the $300,000 Dream Supreme S. at Churchill Downs one week later. Pessin added that the relatively lightly raced mare would likely remain in training for a 6-year-old campaign in 2022.

The $155,000 Fasig-Tipton July gradauate has won three of her six starts this season, including the GII Honorable Miss H. at Saratoga in July, and earned a fees-paid berth into the Filly & Mare Sprint with a victory in the GII Thoroughbred Club of America S. at Keeneland Oct. 9. Bell's The One returned to the worktab Friday morning, breezing an easy half-mile in :47.80 (6/90) beneath the Twin Spires.

“The work was good, just an easy half-mile, :48 3/5 I had,” said Pessin. “She finished off good. I didn't ask her for a whole lot today. She'll have two more works before running at Churchill on the 13th. But everything went according to plan.”

Despite the automatic berth earned in the TCA, Pessin was non-committal about the trip to Del Mar within the context of the travel arrangements secured by Breeders' Cup. A FedEx flight is departing Indianapolis, some 90 minutes north of Louisville, Nov. 1 and neither the trainer nor barn personnel are permitted on the flight.

“I was just concerned with her with the logistics of how it was set up,” Pessin explained. “She's kind of a high-strung filly and I just didn't know if it was in her best interests to make the trip or not. What it boiled down to was deciding that it would not be in her best interests, so we decided to stay here and run a week later from our backyard.

He continued, “The three causes for concern were: going from [Louisville] to Indianapolis, because you could always get tied up at the airport and you never know how long that's going to take. Also, she's never been put in a crate and if she got anxious in the crate, it could have caused some problems for her. And the fact that I or one of my employees couldn't go with her, those were the three main concerns.”

Pessin said he had the complete support of his client.

“Bob asked what I thought was in the best interest of the mare and I gave him my thoughts about the shipping and shared my concerns. He said, 'then go ahead and do what you want and run at Churchill.' He is the kind of owner that cares much more about the horse than anything else.”

Having faced the starter just 21 times in four seasons of racing, Pessin is happy to press on with her in 2022, all things equal, a season that could culminate with a run in the Breeders' Cup at Keeneland.

“Right now it looks like she's probably going to run next year,” he said. “What we do next year is next year, but that had nothing to do with our decision today. We'll see how it plays out. We'll run at Churchill and give her about six weeks off then point to the [GI] Madison [S.] at Keeneland and the [GI] Derby City Distaff S. at Churchill and then we'll see what happens.”

Third to Gamine (Into Mischief) in the 2020 Filly & Mare Sprint, Bell's The One dead-heated for second in this year's Madison and was a troubled fourth in the Derby City Distaff.