Home » Archive » Shared News » Bell's the One Gearing Up For Return

Bell's the One Gearing Up For Return 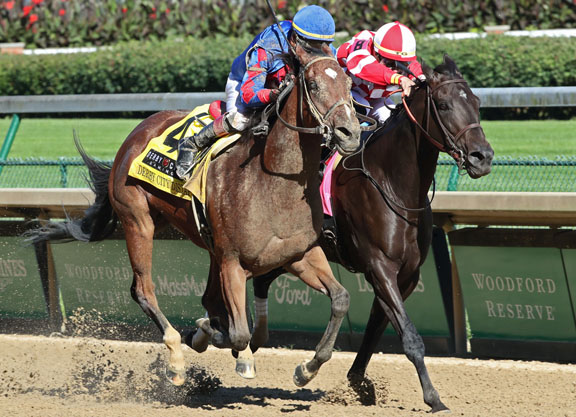 Lothenbach Stables' Bell's the One (Majesticperfection), who became the first Grade I winner for trainer Neil Pessin in last year's Derby City Distaff ahead of a third-place effort to champion 'TDN Rising Star' Gamine (Into Mischief) in the GI Breeders' Cup Filly and Mare Sprint, breezed five furlongs in 1:00.60 (9/36) at the Fair Grounds Feb. 28. Pessin confirmed that the GI Madison S. at Keeneland Apr. 4, in which his charge was a pace-compromised third in the coronavirus-delayed 2020 renewal last July, is the jumping-off spot for the mare's 5-year-old campaign.

“She's doing very well and we are right on schedule to run at Keeneland,” the affable conditioner said Monday from New Orleans.

Following the Filly & Mare Sprint, where she was beaten by the nose of Serengeti Empress (Alternation) for second, Bell's the One was turned out for six weeks at Chesapeake Farm in Lexington. Pessin said she arrived at the Fair Grounds in early January, galloped for about a month and has turned in four breezes since.

“She's on a weekly training schedule, just depends on the weather and the track,” Pessin said. “We're pretty happy with where we are right now, so we do have some flexibility if needed. I'm not on a tight schedule. She'll be ready to rock and roll when Keeneland comes around.”

The trainer has no reservations about training up to the Madison.

“Very,” he said when asked about his level of confidence running in the Madison without a prep. “I have a lot of confidence in her. I'll be honest with you, if my filly runs her race–there has to be a little bit of a pace set-up for her at Keeneland–but with any sort of pace whatsoever, she ought to be tough. I don't think Gamine is coming and I'm really not worried about anything else.”

Pessin has never been one to rack up big numbers, but my any metric, 2020 was a banner year, with a victory in the GIII Winning Colors S. over an insufficient six-furlong trip in addition to the Derby City Distaff, where she got just the better of Serengeti Empress following a final-furlong throwdown.

“Well, winning the Derby City Distaff was nice, especially the fashion we did it,” he said. “Breeders' Cup, if we'd have been second–we had to wait a little bit turning for home and I think it cost us the nose. But with that being said, she ran a big race.

He continued, “Overall, having a horse like her in the barn is very exciting, makes you want to get up in the morning. I do wish she'd have been a finalist in the [Eclipse] balloting, because I do think she belonged on the list. We ran against Serengeti [Empress] twice, we beat her a nose and she beat us a nose. I feel we could have beaten her in the Breeders' Cup with a little more luck. I hope we get a shot to win one or two more Grade Is this year and she stays healthy and everything goes well.”

As for the rest of this year, Pessin said that the team will chart a course backwards from this year's Filly & Mare Sprint at Del Mar Nov. 6 following her first two starts. From there, her future remains an open question.

“I would say it depends on how healthy she stays and how well she runs,” Pessin said. “Bob breeds his own, but that doesn't necessarily mean she'll go straight to the breeding shed when this year is over.

“I want to do whatever is best for her,” Pessin added. “If I think she is 100% good to go for another year, then it'd be up to Bob and [racing manager] Drew [Nardiello] whether to race her or not. But I won't race her unless she's 100%.”