Bell's The One Denies Serengeti Empress in Derby City Distaff 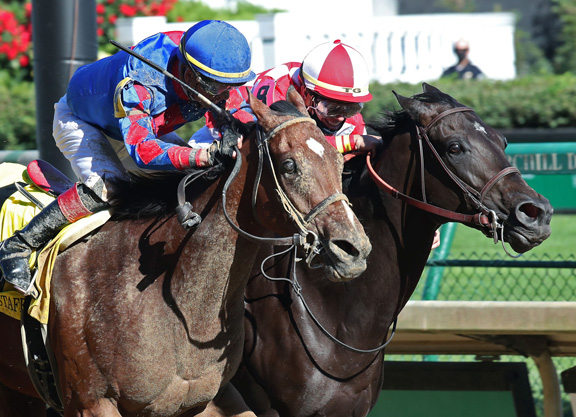 Bell's The One | Coady

In a race that did not deserve a loser, Lothenbach Stables' Bell's the One (Majesticperfection) took advantage of the ultimate race flow for her one-run style and dropped her nose down on the wire ahead of a desperately unlucky 2019 GI Kentucky Oaks winner Serengeti Empress (Alternation) to win the GI Derby City Distaff S. at Churchill Downs.

Taken back off the pace, as is her custom, Bell's The One laid fifth as Serengeti Empress, last-out winner of the GI Ballerina S. at Saratoga, dueled on a scorching pace inside of Bellafina (Quality Road) through a sub :22-second opening quarter. The tough-as-teak Serengeti Empress swatted away her pace pressure despite cutting the half-mile in :43 3/5 and she turned for home in front. Corey Lanerie began to get after Bell's The One at the quarter pole and she came with her patented late run, looking as if she might blow right by the front-runner.

Serengeti Empress dug in with dogged determination, but ultimately just failed to hold the late lunge of Bell's The One.

It was a first career Grade I winner for lifelong horseman Neil Pessin.

“That was an unbelievable horse race,” Pessin said. “Tom Amoss and I actually joked before the photo came out that we would take a dead heat. This filly had a great trip once again with Corey [Lanerie]. He fits this filly so well. She sat behind that really fast pace and was so impressive. I'm so proud of her and so thankful for the owners.”

He continued, “I was happy whether we'd won or lost. Maybe now she'll get a little respect, because she's never gotten it any time she's run. She tries hard every time. The only times she's ever gotten beat, it was my fault. Not hers.”

As for the GI Breeders' Cup Filly & Mare Sprint at Keeneland, Pessin said, “I think you have to. I think that's your only choice. That will be her next race. We gave her two months between her last race and this one and it's another two months to the Breeders' Cup. She does well with the spacing. It sets up good for her and she's won before at seven-eighths at Keeneland in the GII Raven Run.”

Former Airdrie Stud stallion Majesticperfection is the sire of Bell's the One and 19 other black-type winners, including seven graded winners. Bell's the One is not the first of Majesticperfection's runners to show an affinity for Churchill Downs as Lovely Maria captured the GI Kentucky Oaks in 2015. The Harlan's Holiday sire stood in Kentucky through 2018 before moving to Haras Rapetti in Uruguay. Broodmare sire Street Cry (Ire) has 77 stakes winners out of his daughters, including 2019 champion older male Vino Rosso (Curlin). His winning daughter Street Mate produced Bell's the One; Running Mate (Creative Cause), SP; and unraced 2-year-old Summer Mate (Summer Front), who brought $105,000 at the 2019 Fasig-Tipton Kentucky October yearling sale. A half-sister to GSW Tap Day (Pleasant Tap) and a granddaughter of MGSW Possible Mate (King's Bishop), Street Mate has a yearling filly by Cairo Prince.