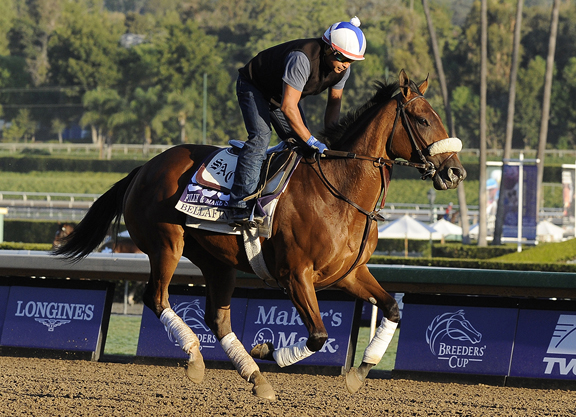 The $800,000 FTFMAR breezer, winless since posting a dominating score in last term’s GI Santa Anita Oaks, sports a record of 6-4-2-0 at the Great Race Place, including a very strong second in the GI Breeders’ Cup Filly & Mare Sprint Nov. 2.

After closing out her 3-year-old campaign with a runner-up finish as the 3-5 chalk in the GI La Brea S. Dec. 28, nothing went right for the Kaleem Shah, Inc., Mrs. John Magnier, Michael B. Tabor and Derrick Smith colorbearer in her comebacker in Oaklawn’s Carousel S. Apr. 25.

The bay was off to a slow start from her rail draw that day and lost valuable position after checking off heels in the early stages. She made a bold four-wide bid to reach contention midway around the far turn, but flattened out in the stretch to finish a well-beaten fourth.

“I think it’s just a race you have to draw a line through,” trainer Simon Callaghan said. “Nothing really went right, but she’s come back and we know she loves Santa Anita. Flavien [Prat] breezed her and said she felt as good as ever.”