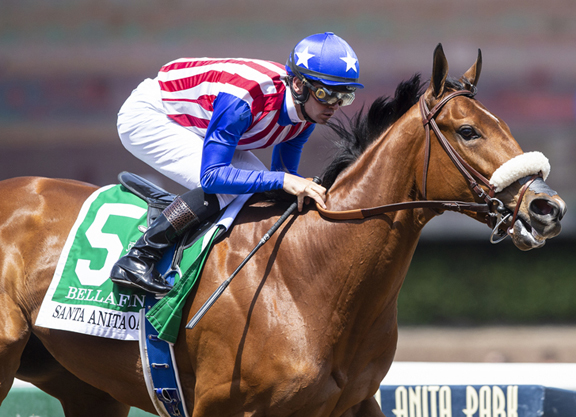 MGISW Bellafina (Quality Road–Akron Moon, by Malibu Moon) was pre-entered for the GI Breeders' Cup F/M Sprint Monday, but was scratched Tuesday and is now retired after developing a minor issue in her Oct. 24 breeze at Keeneland (five furlongs in 1:00.60), according to owner Kaleem Shah.

Shah noted that 'TDN Rising Star' Donna Veloce (Uncle Mo–Coin Broker {Ire}, by Montjeu {Ire}) has been retired as well. Both mares will join Shah's broodmare band with Bellafina set to visit Uncle Mo and Donna Veloce booked to Justify. The news was first reported by the Daily Racing Form.

“Bellafina had a small issue after the work and since it is so close to the Breeders' Cup, we thought it was best to have her go an be a momma,” Shah said when reached by phone Wednesday. “She has been super good to us all of these years, winning multiple Grade Is as a 2-year-old and winning the [GI] Santa Anita Oaks. She has had a wonderful career, but we always air on the side of caution and never take any chances with any of our horses. She will be bred to Uncle Mo next year.”

Bred by JSM Equine, Bellafina was purchased by Shah for $800,000 at the 2018 Fasig-Tipton Gulfstream 2-Year-Old Sale and turned over to trainer Simon Callaghan. Earning her diploma at second asking in the 2018 GII Sorrento S., the bay won both the GI Del Mar Debutante S. and GI Chandelier S. that season. She kicked off 2019 with a trio of victories in the GII Santa Ynez S., GII Las Virgenes S. and GI Santa Anita Oaks. Flying late to be a close second to dual champion Covfefe (Into Mischief) in last year's Breeders' Cup, Bellafina was also second in the GI La Brea S. The 4-year-old won the GIII Desert Stormer S. in May was second in both the GII Great Lady M. S. July 4 and GI Ballerina S. Aug. 8. She retires with a record of 18-7-5-1 and earnings of $1,617,975.

A $450,000 KEESEP yearling buy, Donna Veloce was also bought for $800,000 at the Fasig-Tipton Gulfstream Sale and joined Bellafina in Callaghan's shedrow. Earning the 'Rising Star' nod off a dazzling debut win at Santa Anita last September, she was a neck second to champion British Idiom (Flashback) as the favorite in the GI Breeders' Cup Juvenile Fillies, after which she was bought into by the Coolmore contingent. Second to Bast (Uncle Mo) in the GI Starlet S. in December, the bay captured the GII Santa Ysabel S. Mar. 8 and given a brief freshening, but made the GI Kentucky Oaks Sept. 4, where she finished eighth.

“Donna Veloce has also been retired,” Shah said. “After the Oaks, she came up with a small injury. We had given her plenty of time off after her race in March to recover from that and she seemed a little ouchy again [after the Oaks]. We thought it was best for her to become a momma and she is going to be bred to Justify next year.”